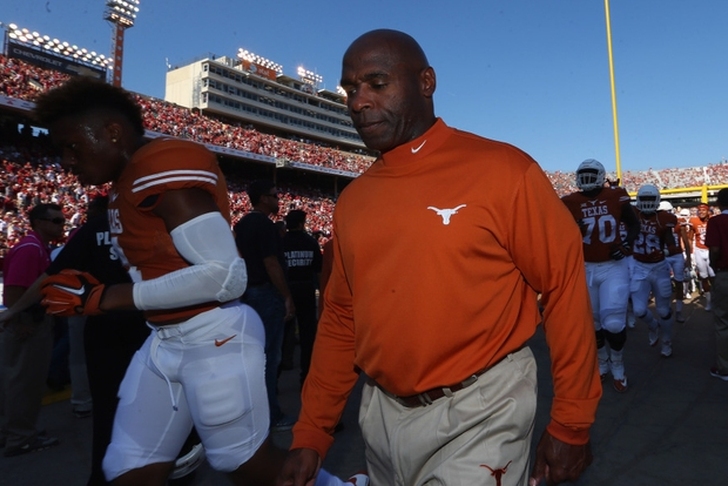 The college football season hasn't even reached it's halfway point, but the coaching carousel has already started with LSU deciding to fire Les Miles last weekend. There are several other top jobs that are rumored to be potentially looking for a new head coach at the end of the season, and some hot candidates (like Houston's Tom Herman) who may leave for greener pastures. To help you separate fact from fiction, here are the latest college football coaching news and rumors:

Texas to fire strong at end of season?
Charlie Strong appeared to be safe at Texas after a big season-opening win over Notre Dame, but after back-to-back losses to Cal and Oklahoma State, he is "very close" to losing his job at the end of the season, according to Sports Illustrated's Pete Thamel:

A high-ranking Texas official said on Sunday night that Strong is "very close" to losing his job at the end of the season after back-to-back road losses to Cal and Oklahoma State. The official said that there will be no move made during the year on Strong. Part of that comes from the fact that there's no logical candidate on the staff to take over the program. Strong announced Monday that defensive coordinator Vance Bedford has been demoted after the Longhorns gave up 99 points the past two games. Strong will take over play calling duties.

Strong is 13–16 overall in his third year in Austin. Texas officials are pleased with how he's recruited and overhauled the program's talent and culture in the wake of the lack of talent and discipline left behind at the end of Mack Brown's tenure. But there are too many details in game management and special teams that the Longhorns have struggled with. Texas getting three extra points blocked in the first half at Oklahoma State on Saturday perpetuated the notion that the Longhorns have failed to pay attention to detail under Strong.

With a 2-2 mark so far this season, Strong has just a 13-16 record at Texas and has not had a winning season.

Herman prefers Texas over LSU, USC?
LSU has already made it known that Tom Herman is one of their top choices, and while Herman is rumored to have interest in the opening, there are reports citing sources close to Herman that say Texas is his top choice.

He started his career as a graduate assistant with the Longhorns in 1999 and 2000, and has spend his entire coaching career in the state outside of stints as the offensive coordinator for Iowa State (2009-11) and Ohio State (2012-14). If that is indeed the case, it is not a surprise to see the Longhorns ramping up the heat on Strong - they don't want to miss out on Herman if they aren't completely satisfied with Strong.

Helton safe at USC?
USC's Clay Helton is in the first year of a five-year deal he signed after having the interim tag removed last year, but many think he has already found his way to the hot seat. After a 1-3 start to the season, there are rumors that he has already lost control of the program and several players are preparing to transfer.

However, a resounding 41-20 win over Arizona State quelled a lot of that talk, and he may not need to be worried about his job security. Helton told the LA Times that AD Lynn Swann has been "nothing but supportive" of him, and Swann echoed those statements, saying he is "100 percent" behind Helton.

Lane Kiffin an option for LSU?
One name that has been brought up throughout the past week at LSU has been Alabama offensive coordinator Lane Kiffin. While some think it's worth LSU to give him another chance as a head coach, former LSU AD Skip Bertman says the Tigers should stay away from Kiffin:

Kiffin has previously been the head coach of the Oakland Raiders, Tennessee Volunteers and USC before being fired and becoming Alabama's offensive coordinator. Remember, Kiffin is still young (41) and one of the best coordinators in the country. He'd also have LSU's offense playing at a high level as soon as he stepped on campus.