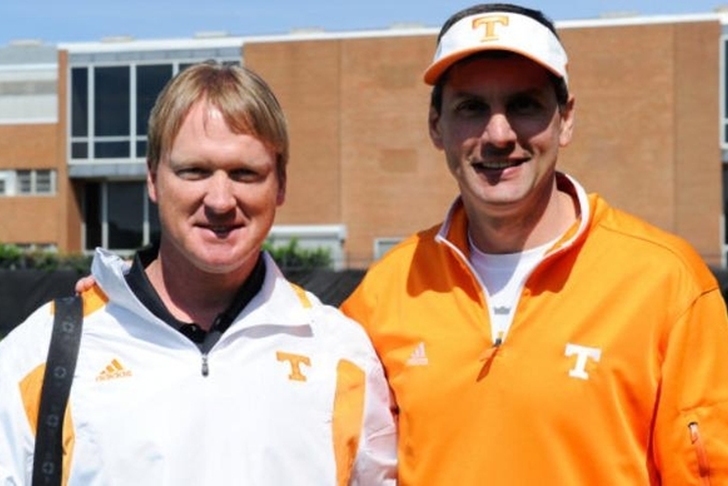 A carousel is one way to describe the rumors surrounding Tennessee Head Coach Butch Jones, the Florida Gators and Texas A&M's situation with Kevin Sumlin. Florida is already looking for a new head coach after firing Jim McElwain, and there are plenty of rumors to sort through regarding who they want to replace him. There are also major coaching questions about the future of coaches at Tennessee and Texas A&M. Now let's dive into some of the rumors surrounding college football.

Butch Jones Tennessee
It was almost certain that Butch Jones was going to lose his job but according to SB Nation's Steven Godfrey, Jones may be able to keep his job if he meets certain criteria:

With Week 10’s win over Southern Miss, Butch Jones’ job security is technically alive, albeit on life support. The message inside the program is that UT needs to win out and keep its recruiting class intact through December’s early signing period.

With that being said a name on the rumor mill if Jones is fired is Jon Gruden..... the Grumors will never go away.

I wouldn’t bet my bottom dollar on this but this is what I’m hearing! #VFLthruthick pic.twitter.com/UGjBzMrFEz

Florida Head Coach Search
The two big names that have been circulating are UCF head coach Scott Frost and Oregon head coach Willie Taggart. Scott Frost seems to be the front-runner for the job at Florida after building a great reputation at UCF. The Knights are undefeated and sitting at 18 in the CFB Rankings, a big part of that is the offensive mind that is Scott Frost.

Taggart is in his first year with Oregon but that hasn't stopped the rumor mill around him leaving for Florida. However, Taggart doesn't appear to be interested based on his latest comments.

"I have not been contacted by anyone," Taggart said. "The only AD I've been contacted by is Rob Mullens, and I love that guy. I'm committed to the University of Oregon and focused on Washington, a big-time game for us this week."

Kevin Sumlin Future at Texas A&M
Following a loss to Auburn on Saturday that dropped Texas A&M to 5-4 after a 4-1 start, TheFootballScoop.com reported, the Aggies are preparing to fire him at the end of the season:

With yesterday’s 42-27 loss vs Auburn, Texas A&M dropped to 5-4 on the season. A&M now hasn’t beaten an SEC West opponent at home in 763 days. Change is coming, but a source tells FootballScoop not to look for A&M to make a move before the end of the season unless something unforeseen were to occur. A&M finishes with New Mexico, then at Ole Miss and at LSU.