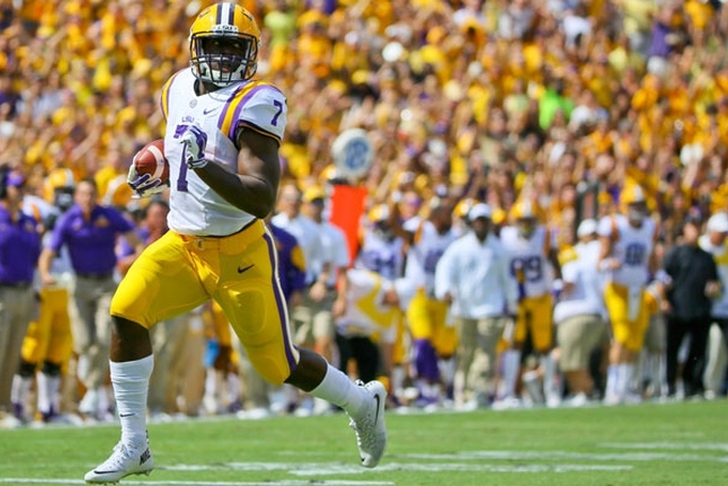 Every week is a test in college football, and some teams passed theirs with flying colors this afternoon. Others...well, did not. Here are five things we've learned about some teams so far today:

1) Auburn simply is not that good

Their overtime victory over Jacksonville State was a major warning sign, but their 45-21 blowout loss to LSU is cause for SERIOUS concern on the Plains. Quarterback Jeremy Johnson can't stop turning the ball over and the defense was uncharacteristically gashed for an obscene 411 yards on the ground. Auburn is struggling on both sides of the ball, and head coach Gus Malzahn needs to find a way to turn things around in a big hurry to keep the Tigers from missing a bowl game - because that's where it looks like they're headed.

2) Leonard Fournette is a BEAST

Mayfield has carried Oklahoma to a 3-0 record, and shined in another test against Tulsa today, completing 32/38 passes for 487 yards and four touchdowns to go along with 85 rushing yards and two more touchdowns on the ground. Those are eye-popping (dare we say, Johnny Manziel-type) numbers, and it's clear he has a firm hold on the Sooners' new up-tempo spread offense. His performance today should put him near the forefront of the Heisman conversation.

Kizer shined in his first career start while leading the Irish to an impressive 30-22 win over Georgia Tech, passing for 242 yards and a touchdown. Notre Dame has the talent to contend for a spot in the College Football Playoff this year, and some thought their hopes were dashed when starting QB Malik Zaire went out with a broken ankle that will cause him to miss the rest of the year. However, Kizer showed the poise, composure, and ability to lead the Irish in big games in this one.

Ohio State managed to get past Northern Illinois by a final score of 20-13, but they trailed for most of the first half against the Huskies - and were tied 10-10 at halftime. Quarterback Cardale Jones had to be replaced by J.T. Barrett, and the defense looked suspect. The Buckeyes looked invincable through their first two games, but this outing shows that they can be beat.