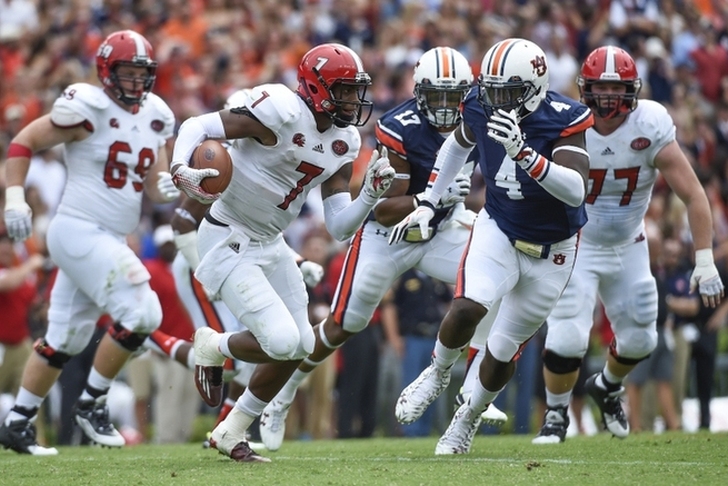 Every week is a test in college football, and some teams passed theirs with flying colors this afternoon. Others...well, did not. Here are five things we've learned about some teams so far today:

1) There's plenty of reason to be concerned about Auburn

Auburn was the preseason pick to win the SEC this year, but through two games, they haven't quite lived up to the billing. Many brushed away their struggles in a Week 1 victory over Louisville as opening weekend rust, but the Tigers needed a last second touchdown and a stop in overtime to pull out a seven-point victory against FCS-level Jacksonville State.

Quarback Jeremy Johnson has looked nothing like the guy many thought could win SEC Player of the Year, throwing five interceptions in the first two games while the defense still has some improvement to make under Will Muschamp. They need to get things figured out in a big way soon with a trip to Death Valley to face LSU looming next Saturday. Harbaugh has efficiently implemented his ground-and-pound philosphy and has quickly turned the Wolverines into a dominant rushing team by refusing to do anything but jam the ball down the defense's throat. Michigan ran the ball an astonishing 48 times in this one for 225 yards, compared to just 26 passing attempts. We usually see those numbers reserved in today's era of spread offenses in college football, but this gives Michigan a different identity that will be extremely tough for the opposition to stop.

The flip side of that is a stout defense that was supposed to be the strength of this team, and after a decent performance against Utah, they absolutely dominated Oregon State, limiting the Beavers to 138 total yards - 79 of which game on the opening drive. Oregon State was breaking in a true freshman quarterback, but this level of success goes well beyond that. The Wolverines will have a chance to beat everyone - including Ohio State - if they continue to play at a high level.

3) Dalvin Cook should be getting more Heisman love Florida State has turned into a running team without Jameis Winston, and that's just fine with Cook. Following a 156-yard, two-touchdown performance against Texas State (on just 19 carries), Cook shredded USF's defense to the tune of 266 yards and three touchdowns on 30 carries, including a highlight-reel 74-yard scamper. He looks every bit as good as Georgia's Nick Chubb and LSU's Leonard Fournette, and should start getting some legitimate Heisman buzz soon.

4) Notre Dame isn't as good as we thought they were

The Irish looked like world beaters in their opener against Texas, blowing out the Longhorns 38-3, but then struggled mightily against Virginia. Notre Dame needed a touchdown pass with 12 seconds left to get past UVA because of their defensive lapses. After looking so good against Texas, they have up over 400 yards of offense to a Virginia team that was one of the worst offenses in the entire country last year. That's a major red flag about how this team may play on the road going forward.

Many people have forgetten about the Rebels after their late-season collapse last season, but they've looked like one of the better teams in the country so far. Not only did they return eight starters from the nation's top defense last year, they also have put up 76 and 73 points in their first two games. Given, they were against lesser competition (UT-Martin and Fresno State, respectively), but they've been extremely explosive under new QB Chad Kelly. They'll get their first big test Saturday at Alabama, and it looks like the Rebels have what it takes to pull the upset.