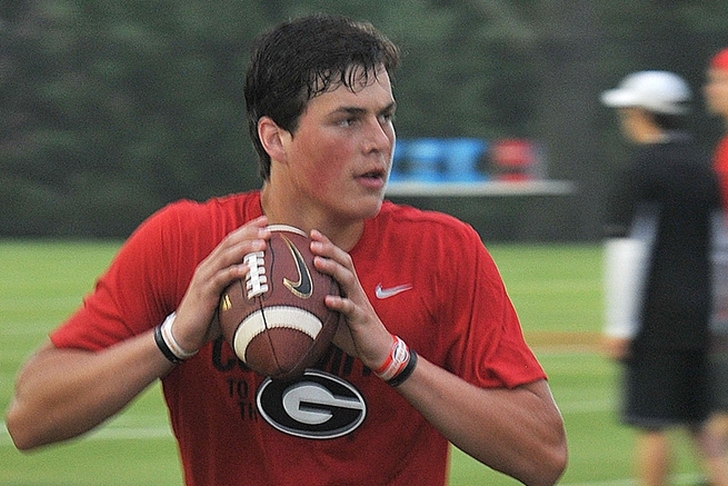 Jacob Eason will stay with Georgia. He re-opened his commitment process and checked out several other schools, but ultimately elected to stay with the Bulldogs.

Jacob Eason visited Georgia again this weekend, meeting with new head coach Kirby Smart, and had said previously that he would announce his decision soon after the visit.

Eason will visit the Washington Huskies, and already received an in-home visit from Washington State head coach Mike Leach. Eason is expected to make a decision after he visits Georgia this weekend.

Jacob Eason, the nation's #1 QB, announced today that he will choose between Florida and Georgia.

Jacob Eason, the nation's #2 QB recruit is actively looking around and will likely decommit from Georgia in the coming days in order to give himself the opportunity to look at other programs before enrolling in college early in January.

The star QB from Washington state has been committed to the Bulldogs for nearly 18 months, but quietly opened up his recruitment several weekends ago - reaching out to 4 schools with offensive philosophies that matches his game: Michigan, Alabama, Florida, and Notre Dame.

According to our sources, Eason is leaning heavily to Florida at this point. 247Sports is reporting that Eason will take an official visit to Florida. However, Georgia can still land the coveted prospect if they make a quick coaching hire that runs an offensive system that matches Eason's skillset (pro-style).

Sources indicate that if Georgia hires Houston head coach Tom Herman, Eason would remove the Bulldogs all together from consideration due to the spread-option system that Herman runs. However, that doesn't seem likely now that Herman signed a contract extension at Houston.

The 2nd-rated QB in the 2016 recruiting class, Jacob Eason, who has been committed to Georgia since July 2014 (before the start of his junior season in high school) has reached out to at least 4 other schools in recent days and plans to open up his recruitment after UGA has fired head coach Mark Richt.

Richt was under heavy for failing to live up to lofty expectations, and despite posting a 9-3 record this year, the Bulldogs decided it was time to move in another direction.

Here's what we know:

Eason is committed to Georgia still, and has every intention of being a member of the 2016 Bulldogs football team, but that can and will change now that Richt has moved on from the the Bulldogs.

But, after the loss to Florida, dropping Georgia to 5-3 (and losing 3 of last 4), Eason is planning ahead and wants to make sure that other schools he is interested in know that he will not be attending Georgia if Richt isn't the coach, and that they should plan their scholarship numbers to allow for him to switch his commitment if needed.

While Eason's father (Tony) has publicly stated that he is firmly committed to Georgia, the family has made contact with all 4 schools' football coaching staffs in past 72 hours, including speaking directly with UF offensive coordinator Doug Nussmeier after following him on Twitter.

2 schools above the rest:

One thing that is clear about the 4 schools in contention to gain Eason's signature is that 2 of them are much more likely than the others. Although Eason has deep family ties to Notre Dame (dad played at ND in the 80's) and loves the Alabama offense, our source has told us that Florida and Michigan would be the 2 schools most likely to gain his commitment.

Only one problem with Michigan...they already have a highly committed QB in Brandon Peters from Indiana, the #7 rated QB in the country. But, Eason loves Jim Harbaugh, and has long been intrigued at the potential of being Harbaughs "next Andrew Luck".

Florida has a committed QB also, but 3-star Kyle Trask is likely a career backup in Gainesville and not a player who's continued commitment to the Gators would be scare off Eason....so, we lean strongly that the Gators would have a much better chance at landing Eason, and that Michigan might tell him thanks, but no thanks, given their belief in the talent that Peters possesses.

Eason is likely to come as a package-deal with the nation's #1 TE, 5-star Isaac Nauta. Nauta has long been considered leaning to Georgia, but would likely look around more if Richt was no longer the coach. Nauta and Eason have spoken multiple times in the past few days, and have Michigan as their mutual #1, with Florida a close second.

Now that Richt is gone, the Bulldogs have opened up the most hotly contested recruiting battle of the 2016 class - a package deal for two 5-stars in QB Jacob Eason and TE Isaac Nauta.