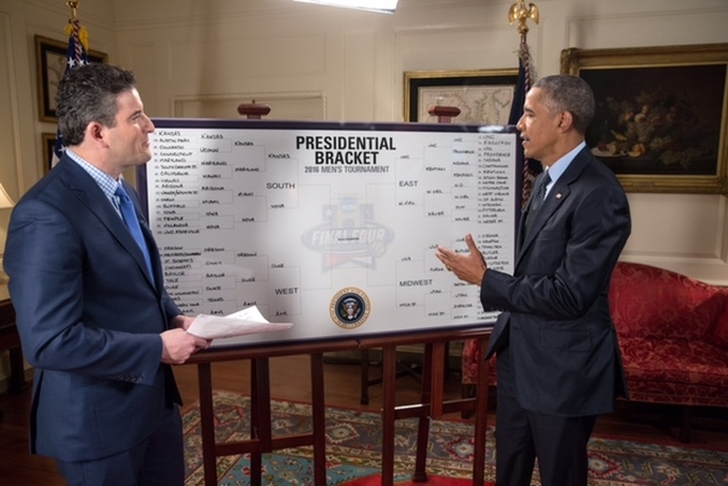 President Barack Obama unveiled his final bracket as Commander in Chief yesterday with ESPN's Andy Katz, picking the Kansas Jayhawks to win the title by knocking off the North Carolina Tar Heels in the national championship game. Here's his full bracket:

Obama picked mostly favorites throughout the entire bracket, which he admitted he is "just not knowledgeable enough with all the teams these days to be able to pick somebody who's an eight-seed to win the tournament."

In fact, President Obama picked six lower-seeded teams to win in the first round - three of which were nine-seeds beating eight-seeds. The biggest upset pick on his bracked was 13-seed Hawaii beating four-seed Cal, along with a pair of 10-seeds (VCU, Syracuse) upsetting seven-seeds.

Perhaps his biggest upset pick was Texas A&M, who he has in the Final Four as a three-seed. Michigan State, a two-seed, rounds out his Final Four. He also has Duke upsetting No. 1 seed Oregon in the Sweet 16 in the West Region.

Last year, President Obama predicted top-seeded Kentucky would beat fellow No. 1 seed Villanova in the national championship game. Kentucky lost in the Final Four to Kentucky, while Villanova was upset in the Round of 32 by NC State.