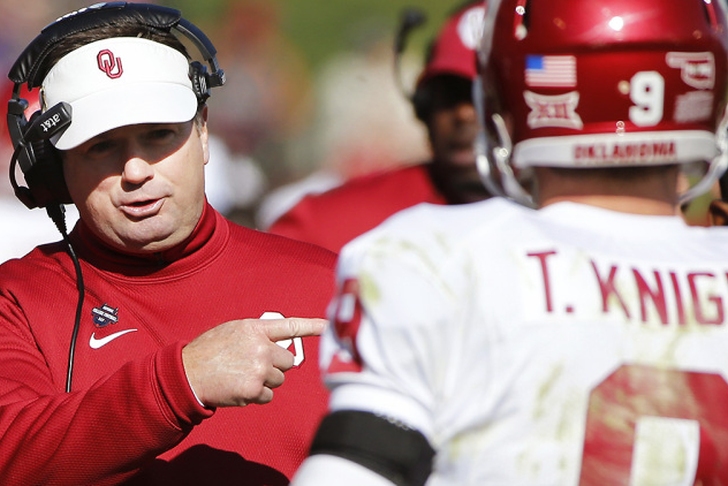 To test the difficulty of a college football schedule, you have to look at two major things -- non-conference showdowns and in-conference road games. Taking both of those factors into account, here is our list of the 5 Hardest Big 12 Football Schedules For 2015.

The combined 2014 record of Kansas' three non-conference opponents is 27-13 -- the toughest mark in all of the Big 12 this year. The Jayhawks also have to contend with Heisman contender Trevone Boykin on the road and an improved Texas squad in Austin. Not an easy task for a stripped-bare talent pool being led by first-year head coach David Beaty. The 25-15 combined 2014 record of Iowa State's three non-conference opponents is third-best in the Big 12, including a Northern Iowa team that upended the Cyclones back in 2013. ISU's killer Big 12 road schedule pushes them past Kansas on this list, with road games against two teams (Oklahoma, Kansas State) with legitimate College Football Playoff aspirations and one (West Virginia) who could sniff 10 wins.

Texas Tech is another of the four Big 12 teams who plays their non-conference slate against a slew of programs who all had winning records in 2014. The road trip to Arkansas will be a doozy considering the 49-28 home beatdown the Red Raiders suffered last year. Add in trips to Oklahoma and West Virginia, along with that sneaky Texas squad, and you have a potential recipe for disaster for the restocking Red Raiders. The big hurdle of Oklahoma's non-conference slate is a trip to Knoxville to face the Vols -- a team that most pundits have pegged as an SEC program set for a major rise following a 7-6 campaign in 2014. The Sooners have never travelled to Knoxville. However, the big trouble comes in-conference with pivotal road games against Kansas State and Baylor, along with a perhaps overlooked run through Bedlam at Oklahoma State to close out the regular season.

Texas' first claim to the top spot comes with the fact that they are the only Big 12 team with two Power Five schools scheduled on their non-conference ledger -- a slate which includes a massive road game against Notre Dame in South Bend. The second claim? Texas is the only team on this list to face TCU and Baylor on the road. That combined with the N.D. trip is cause enough for the Longhorns to sneak past the Sooners on our list.