Which Mississippi Team Has The Best Chance To Go Undefeated? 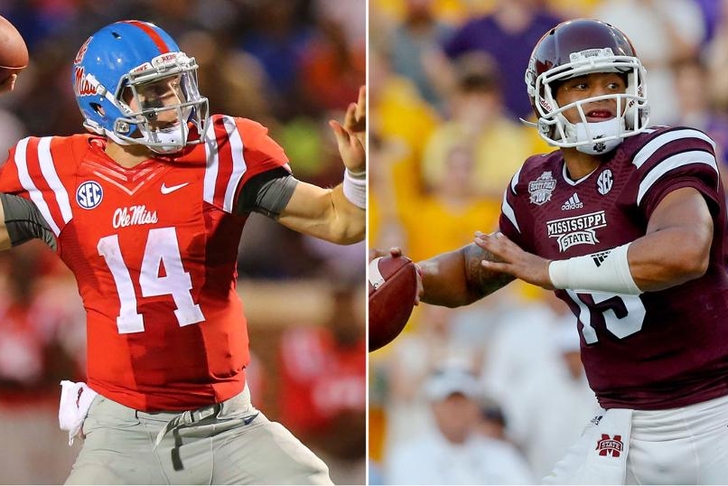 When the AP Poll came out on Sunday, both Ole Miss and Mississippi State were anxious to see where they'd land after both scored big wins over Alabama and Texas A&M, respectively. Being in-state rivals added another layer of intrigue, as whichever team was ranked higher would obviously have some extra bragging rights for the week.

Turns out, they're BOTH ranked No. 3 in the country. They tied in the number of points awarded to teams based on votes, so they're in exactly the same spot.

Both teams play in the SEC West, so both teams will play roughly the same grueling schedule. However, there are some slight differences, so who's more likely to finish this season undefeated?

Already with a win over the toughest team on their schedule, Ole Miss now faces another tough test on the road against Texas A&M. The Aggies are desperate after losing to Mississippi State last week, so the Rebels can't afford any sort of hangover from the Alabama win. The good news is that Kenny Hill and the Aggie offense really struggled against the Bulldogs' physical, fast defense, and Ole Miss has an even better defense.

Presbyterian is obviously an easy win, while Tennessee and Arkansas are games they should win, barring any monumental upset.

That leaves a night game in Death Valley and No. 2 Auburn, along with the Egg Bowl against Mississippi State. LSU isn't the same team as the past few years, and they get Auburn at home. Both of those games should be toss-ups, as will be the game against the Bulldogs.

Kentucky, Arkansas, UT-Matin, and Vanderbilt should all be easy wins for Mississippi State, as three of those games are easier than anyone Ole Miss will play (with the common opponent being Arkansas).

Facing Auburn at home will be a toss-up - though I expect the Bulldogs to come out on top - as will the Egg Bowl. However, having to travel to Bryant-Denny Stadium to face an Alabama team that can't afford another loss is going to be the toughest game this program will have ever played, and I just don't think they can get it done.

Since they've already beat Alabama, and Mississippi State has to play them on the road, Ole Miss has the best chance of the two to go undefeated.

Who do you think has the best chance to go undefeated? Which team will finish with a better record? Tweet your thoughts to @brauf33 and leave a response in the comments!