Where Does Your Team Fit in the Three Tiers of the ACC? 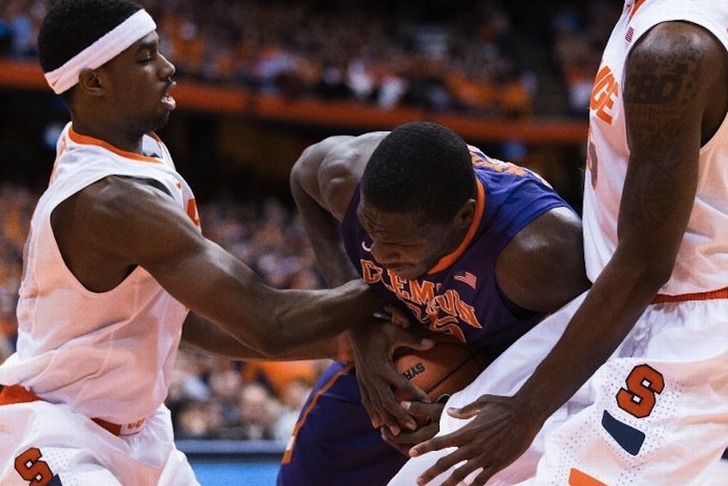 After another week of close contests and a few minor upsets, the ACC has race has divided itself into three distinct tiers: the ACC title contenders, NCAA bubble teams, and the bottom feeders.

*rankings based on ACC Standings*

The Orange just keep winning, although it hasn't been in the most convincing of fashions lately.

They needed a heroic effort from Trevor Cooney (nine threes!) to barely squeak by a .500 Notre Dame squad, then let Clemson hang around for 30 minutes before putting them away. Jim Boeheim's squad plays great defense, but they really struggle at times offensively, which may come back to haunt them during March.

Syracuse is a very good basketball team, but that first loss is coming soon. My guess would be Wednesday when they will face a very motivated Pitt squad, but the Panthers haven't been playing great lately either. A loss might be the wake-up call they need to start playing more motivated basketball, but you can't really fault an undefeated team almost halfway through February.

Virginia was the first team to hit 10 conference wins, and their 7-game winning streak doesn't appear to be slowing down anytime soon.

The Cavaliers cruised to two easy wins over lesser opponents last week, and their next two games are much of the same. They don't play a ranked team until March, when Syracuse comes to Charlottesville, so there's a real chance UVA could win out the regular season if they can pull the home upset.

Head coach Tony Bennett's squad doesn't do anything flashy, but they play great defense, execute their offense to perfection and eventually just wear their opposition down. Senior Joe Harris is the heart and soul of this team, but sophomore Malcolm Brogdon has emerged as this team's go-to offensive threat.

Pitt needed one overtime to squeak past Miami, but then needed two to get by last-place Virginia Tech. Safe to say, the Panthers really struggled last week.

The good news is they survived and picked up two wins, but this is the week where we find out how good this Pitt team actually is. They haven't beaten a team in the top 50 of the RPI all season, and need to start playing better against good teams if they want to do well in the NCAA Tournament.

The Panthers nearly knocked off the Orange in the Carrier Dome, so the potential for the home upset Wednesday is there. Their weekend game in Chapel Hill is essentially a toss-up, with both teams needing the win for tournament seeding purposes.

Right now we know Pitt is a solid basketball team, but we'll find out their potential for March this week.

The Blue Devils cruised to two blowout wins over teams in the bottom third of the conference last week, continuing their strong play.

Perhaps the best news of the week for any team in the ACC came to Duke with the play of Jabari Parker, who averaged 25 points and 12 boards in those two games, but more importantly shot a combined 20-27 from the field. Parker had been wildly inefficient offensively in ACC play after a super start to his season, but seemed to regain that level of play this week.

Two tricky games await Coach K's squad, with always tough games against UNC and Maryland on deck. Duke should win both of those games very easily — especially considering how hot they've been — but anything can happen in rivalry games.

UNC fans, don't worry, your team is clearly in the tournament right now. I have them slated as a bubble team because of their inconsistent play and terrible losses. They do have some great wins over Michigan State, Kentucky, and Louisville, but haven't really beaten anybody since mid-December.

That can all change this week. Both Duke and Pitt come into Chapel Hill, and the Tar Heels have the potential to beat both.

Unfortunately for them, they also have the potential to get blown out by both.

Carolina plays good defense and rebounds exceptionally well, but are a train wreck on offense. Marcus Paige is their only consistent scorer with everyone else chipping in what they can.

I don't know if that's good enough to get them some more key wins — not that they need them — but they certainly don't need any more losses. If they drop both this week, they'll be sitting with a .500 conference record and be 16-9 overall, which doesn't exactly scream tournament lock.

Clemson played admirably in the Carrier Dome, but just didn't have enough firepower to get past the Orange. The Tigers are still hanging their hat on their victory over Duke to get them in the tournament, but are squarely on the bubble.

They need to take care of business at Notre Dame and if they do, it sets up an interesting home matchup with Virginia. Both teams like to play that slow, half-court style and are great defensively, so points may be hard to come by.

However, with the game being in Littlejohn Coliseum, and with a chance ensure their spot on the right side of the bubble, the Tigers might just play inspired enough basketball to pull off the upset.

The Terps were disappointing in their loss at Chapel Hill, but came back with a resounding win over a FSU squad that's really struggling. With point guard Seth Allen back from a broken foot, Maryland has evened out its play and begun to look like the team we thought they'd be over the summer.

However, it might be to late to save their tourney hopes. Two road games against two of the hottest teams in the country await, and realistically they can't lose them both and be considered a tournament team.

With home games coming up against Syracuse and Virginia, they desperately need an upset this week to boost their resume, give them a signature win, and keep them in the bubble conversation.

NC State did what they had to over the weekend, narrowly defeating Miami on the road. It seems strange to talk about this Wolfpack squad as a bubble team, considering they have no signature wins, but they've avoided bad losses for the most part.

In order to get in, they have to keep taking care of business and pick up one or two upsets over ranked teams. While they probably won't beat Syracuse in the dome, no one can really fault them for that — but they do need to beat Wake.

State's on the outside looking in right now, and they need to start elevating their level of play and become more consistent on offense to get into the Big Dance.

The Seminoles have lost four of their last five games and have fallen from the right side of the bubble to nearly being off it. Good thing they hammered Virginia Tech, because that just would've been a disaster.

But they need to turn things around, and do so quickly. FSU has some big wins over VCU and UMass, and based on their fairly soft schedule the rest of the way, they just need to avoid the bad losses and get back to winning the games they should win.

We'll find out if this team deserves to be in the tournament discussion this week, with two tricky games on tap. Rivalry games always have potential for an upset, and the 'Canes are looking for anything to boost their morale, while Wake Forest is really tough on their home floor.

Wake looked like a potential sleeper team to get into the tournament a few weeks ago, but that has since gone by the wayside. The only thing the Deacons have to hang their hat on is a home win over UNC, but they also have a few bad losses to counteract that.

One loss this week, and Wake is off the wrong side of the bubble. They are in a similar position to that of NC State, so that game is just going to come down to who wants it more. FSU is a better team on paper than the Deacons, but that's a game Wake has to win to seriously get back into the tournament conversation.

Georgia Tech has greatly improved from the beginning of the year, but unfortunately they're still not very good.

They were close to pulling the upset over Clemson on the road, and stayed with Virginia until the Cavs went on huge run in the last nine minutes of the game to distance themselves.

The Yellow Jackets have staked their claim as the best team of this group, but they're still at the bottom of the ACC and only have their pride to play for.

The Irish played really well against Syracuse, but just didn't have enough talent to pull it out at the end. They followed that up with a dismal showing against UNC, continuing their disappointing season.

The best case scenario for Notre Dame is to try and get hot before the ACC Tournament, improve their conference standing, and hope to go for a surprise run.

There's the potential for an upset when they host Clemson, and another real possibility for a win against Boston College, so the Irish could get that run started this week.

However, there's a reason they're 3-8 in conference — they haven't capitalized on many opportunities thus far this season.

Miami continues to struggle, recording two more close losses last week. They've now lost seven games this year by five points or less, and with different outcomes in a few of those games the 'Canes could be a bubble team.

But they're not, so they are left playing the role of spoiler in the ACC. They can upset FSU Monday night given the Seminoles recent struggles, and Virginia Tech seems hopeless when it comes to winning another game.

The 'Canes are inexperienced and that has shown in all their close games, but they have enough talent and play good enough defense to upset Florida State and go 2-0 this week.

Boston College played two of top teams in the ACC last week, and got the results that were expected. However, they played well, staying with Duke for a half and only losing to Virginia by 10.

Despite their dismal record, the Eagles are on the upswing, and face two other "bottom feeders" this week.

They're another team with nothing to play for but pride, but guard Olivier Hanlan is one of the best-kept secrets in the country and can put BC over the top in a few of these close games.

Virginia Tech is obviously the worst team in the ACC, but took a ranked Pitt team to double overtime before falling. Unfortunately, that was probably their best chance to upset one of the top teams in the nation this season.

They'll still have chances to win this year, starting next weekend when they have a week to prepare for Miami, but a 10 game losing streak speaks for itself.

Any win they may get for the rest of the season will be a major upset.