What We Learned From Saturday's Top 25 Action 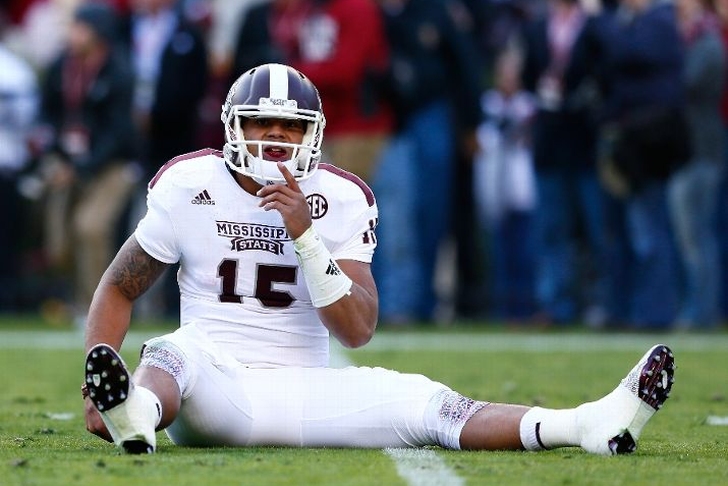 This Saturday was stocked full of key games between top 25 teams that would have a huge impact on the College Football Playoff race. Now that the dust has settled, what did we learn? J.T. Barrett is the real deal:

Barrett's breakout game might have come last week against Michigan State, but he followed that up with another dominating performance this Saturday. He accounted for 389 total yards and four touchdowns and looked like the best player on the field. Ohio State is going to need him to continue to play at this high level if they want to make the playoff.

Ohio State isn't as good as they looked last week:

The Buckeyes also can't make the playoff if they continue to play as sloppy as they did tonight. They should've dominated Minnesota today and they didn't. Ohio State is still one of the best teams in the country, but they didn't look like a top-four team today Quarterback is the most important position in football:

Clemson fans were excited for freshman QB Deshaun Watson's return, but it was cut short when he left the game early with an injury. In came fifth-year senior Cole Stoudt, who was unable to move the offense and threw two interceptions that were returned for touchdowns. Georgia Tech gave the Tigers every chance they wanted to get back into the game, but they just couldn't do it because of poor quarterback play.

Clemson is not the team we thought they were:

That being said, for a team that's as good as Clemson is supposed to be, they should be able to overcome the play of one player. The defensive was porous and their running game was not effective, and now the Tigers will be unranked for the first time in a while. Duke's feel-good story is over:

The Blue Devils were 8-1 and looked like a lock to win the ACC Coastal division for the second straight season, but now there are doubts about this team. They've now lost to the two best teams they've played (Miami and Virginia Tech) and have zero "good wins". Duke can still make the ACC Championship Game, but it's no longer a sure thing.

No one knows what to make of Virginia Tech:

The Hokies have two road wins over ranked opponents, yet also have losses to Pitt and Boston College. Their inconsistency is why they're only 5-5 on the season and fighting for a bowl berth, but they could also beat anyone on any given day. Melvin Gordon is a Heisman front-runner:

Gordon broke the NCAA record for most rushing yards in game with 408 and carried the Badgers to the win. This will be his "Heisman moment" that is so valued once it's time to vote for the award. Oregon quarterback Marcus Mariota is still at the top of the list, but Gordon's performance has made this a two-horse race.

The Big Ten Championship Game is going to be fun:

It now looks like Wisconsin and Ohio State will face each other in the Big Ten title game, which will be a great matchup. The Badgers' physicality against the Buckeyes' spread attack will be an interesting contrast of styles, and Ohio State should be playing for a berth in the College Football Playoff. Notre Dame has fallen a long way in the last two years:

Two years ago, the Irish cruised into the BCS National Championship Game with an undefeated record. Now they're going to drop out of the top 25. Notre Dame's defense carried that 2012 squad, and this defense looked terrible against a bad Northwestern team. Head coach Brian Kelly needs to upgrade the talent across the board to get this program back to where they were.

There are no easy games in college football:

Last week, Northwestern only scored nine points against Michigan in probably the worst game of the season. Now they put up 43 points and gave Notre Dame their first home loss of the season. College football is a crazy, crazy sport. Blake Sims is a good quarterback:

Sims has long been considered to be Alabama's weak link of offense, but he made several plays that won the game for the Tide. He scrambled for numerous third down conversions and made the big throws down the field that Dak Prescott didn't make during the game. Sims looks like he's going to lead the Tide to the College Football Playoff, and that's no small task in the SEC West.

The SEC might get two teams in the playoff - or none:

With Alabama's win, the SEC has two of the best one-loss teams in the country. If Mississippi State beats Ole Miss in the Egg Bowl and Alabama beats Auburn and wins the SEC Championship Game, I think both teams will be in. However, if each team loses - a very real possibility - it'll be hard to justify putting an SEC team into the top four. We knew Todd Gurley was one of the best running backs in the country (Melvin Gordon is giving him some good competition), but freshman Nick Chubb has proven to be just as effective. The Bulldogs used both of them to the fullest extent against Auburn on Saturday, and absolutely dominated their really good defense. They're going to make Georgia incredibly hard to beat.

The Bulldogs are somehow still alive in the College Football Playoff picture:

A huge win over the No. 9 team in the country will surely mean that the Bulldogs will jump in the polls. Georgia has two more games against ranked opponents - Georgia Tech and the SEC Championship Game (if they make it) - and if they win each of those games, they could have enough quality wins for the selection committee to put them in the top four. The Tigers seemed to turn their season around with a huge win over Ole Miss, but they only scored 10 points in that game. In their heartbreaking overtime loss to Alabama last week, their offense only scored 13 points. Against Arkansas, they only gained 123 total yards. Growing pains are expected when you have freshmen all over the field on that side of the ball, but LSU has to be better than this to have success going forward.

You have to bring the intensity every night:

LSU was undoubtedly drained following two hard-fought, emotionally charged games against Ole Miss and Alabama, and it was clear they just didn't bring their best tonight. You can't do that in college football, or else you'll be upset by a desperate team like Arkansas. Texas A&M's win over Auburn was a fluke:

The Aggies seemed to be back after losing three straight games to Mississippi State, Ole Miss, and Alabama, but the loss to Mizzou shows that Auburn win is the outlier of the bunch. Their defense was gashed to the tune of 587 yards and they were unable to control the ball on offense. Head coach Kevin Sumlin is going to have to go back to the drawing board for next year.

Mizzou holds a one-game in the division over Georgia, but the Bulldogs own the tie-breaker after beating the Tigers earlier this season. Missouri's last two games are against Tennessee and Arkansas - both very winnable games. If they can avoid an upset, the Tigers will be in Atlanta for the second straight year. The Seminoles completed their third comeback when trailing by 15 or more points this season - no other team in the country has more than one. Something clicks for this team in the second half that doesn't in the first, but they always find a way to pull out a win in the end. It's almost becoming routine at this point.

Could an undefeated Florida State team miss the playoff?:

This thought crossed a lot of people's minds after the game today, and it's a slim possibility. If Alabama and Mississippi State win out, both of them should be in. Oregon or Arizona State will be in if they win out, and that leaves one spot for Baylor, TCU, and Florida State. If the Seminoles continue to struggle like they have, well, let's just say they'll be sweating the committee's decision. Arizona State has won games this season largely due to their explosive offense, but they were grounded Saturday night. On the flip side, their young defense that's struggled all season was exposed. Oregon State had over 500 yards of total offense, and ASU just wasn't able to keep up.

With the Sun Devils' loss, suddenly the Pac-12 race is wide open. Enter No. 1 UCLA, who beat Arizona State earlier this season. If the Bruins beat USC and then get into the Pac-12 Championship Game and upset Oregon, they could very well rise into the top four at the end of the season.

Who had the most impressive performance of the day? What did you take away from this weekend’s games? Tweet your thoughts to @brauf33 and leave a response in the comments!