What We Learned From Saturday's Biggest Games 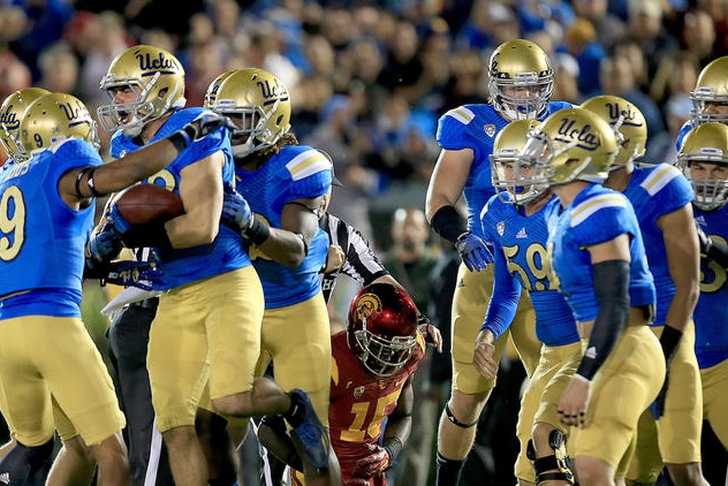 Saturday's slate of games featured only three matchups between teams ranked in the top 25, but there were still a lot of entertaining games across the country. What did we learn from another weekend in college football? Minnesota is a legitimately good team:

The Golden Gophers were at the top of the Big Ten West Division all year, but they didn't have any wins over good teams they could hang their hats on. They finally got that Saturday in Lincoln, and erased a 14-point halftime deficit to do so. If they beat Wisconsin next weekend, Minnesota will be going to the Big Ten title game.

Nebraska is a one-man show:

Running back Ameer Abdullah is one of the top backs in the country, and he's carrying this team. He had another good game on Saturday (98 yards, one TD), but no one else on the team had a performance worth noting. You won't be a top team in the Big Ten with just one good player. The Razorbacks have only lost one SEC game by more than a touchdown this season, and that was their first contest of the year against Auburn. They lost to Alabama and Mississippi State by a combined eight points this season, and finally came through against a ranked team this weekend.

Ole Miss is a different team from the start of the year:

Remember that Ole Miss squad that beat Alabama earlier this year and was competing for a playoff spot? Yeah, this is not that team. The Rebels have now lost three of their last four games and are severely struggling offensively. It'll be a huge upset if they beat Mississippi State next weekend. Arizona will be a Pac-12 power next year:

The Wildcats were on fire today, and they rode the legs of freshman running back Nick Wilson (218 rushing yards, three TD's) past one of the country's best defenses. This team is led by another freshman, quarterback Anu Solomon, and both of those players should be better next season as they continue to improve.

Utah's defense is one of the best in the country - even though they didn't show that today - but they've often been put in bad positions because of how ineffective their offense has been. They passed for only 171 yards against Arizona and rank 100th in the country in that category. Their lack of explosion makes them easy to defend, and therefore easy for good teams to beat. Bobby Petrino is one of the best coaches in the country:

This is more of a reminder, but what he's been able to do with the Cardinals this year has been amazing. Say what you will about him as a person, but he's implemented an entirely new system and has his team playing as well as anyone in the country, having won three of their last four games.

There weren't a lot of turnovers, penalties, or mistakes the Irish could blame for losing this game - they were just flat out beaten by a better team. Notre Dame has now lost four of their last five games and are reeling, having fallen a long way from being the College Football Playoff contender they were a few weeks ago. The Bruins have an outside chance to make the College Football Playoff:

UCLA fell off the playoff radar after they suffered back-to-back losses to Utah and Oregon early in the season, but they're set to move back into the top 8 with a rematch with the No. 2 Ducks looming in the Pac-12 title game. They have two losses, but if the Bruins can pull the upset over Oregon, they'll make it hard for the selection committee to leave them out.

Pundits will point to UCLA as the case for expanding the playoff to eight teams:

As was the case with Texas A&M two years ago during Johnny Manziel's Heisman campaign, the Bruins look like they can play with anyone the country, but early season struggles are holding them back in the rankings. This team has developed and matured into one of the best teams in college football, yet they might not get a chance to prove it in the playoff as it's currently formatted - even if they do beat Oregon.

Who had the most impressive performance of the day? What did you take away from this weekend’s games? Tweet your thoughts to @brauf33 and leave a response in the comments!