Top 5 Uncommitted 2015 Football Recruits & Where They May Land 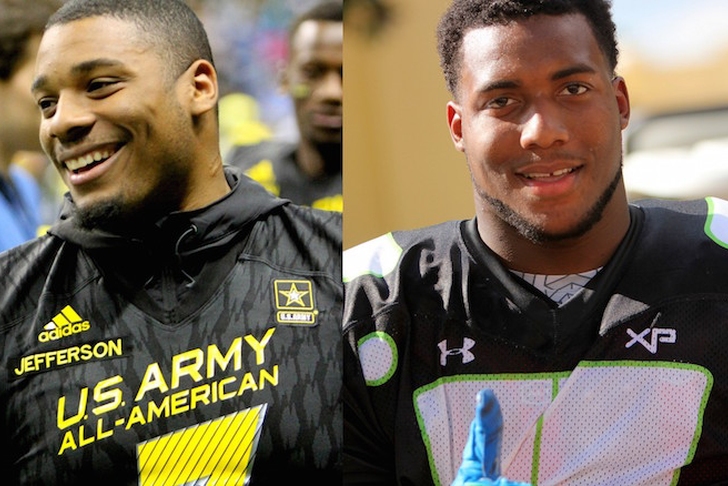 National Signing Day is just two weeks away, and there are still several top recruits that have yet to make a commitment. Here are the top five uncommitted recruits and where they could possibly land:

The big 6'6", 275-pound tackle is viewed as someone who can anchor a program's offensive line for the next three years. Florida is the favorite to land him, but Auburn is making a late push after he made an unofficial visit to the school this past weekend.

Cowart has the size (6'4", 250 lbs.) and speed (4.6 40-yard dash) that have college coaches drooling, and should be able to make an immediate impact rushing the passer as a true freshman. Florida is again the favorite, but Florida State and Auburn are also in the mix.

Marshall is a big, physical corner (6'1", 190 lbs.) that can also play safety, and that versatility means he should see the field a lot as a true freshman. USC is the odds-on favorite to land him and keep him in-state, but he's also considering LSU, Florida State, and Notre Dame, with Michigan making a late push with Jim Harbaugh.

Jefferson is probably the most physically ready defensive end in this class at 6'2", 275 pounds. He's projected to go to Florida as the Gators are hoping to land this trio of top prospects, but Ole Miss also has a strong chance. LSU, Auburn, and Alabama are on the table as well, but they're on the outside looking in.

Beckner is top uncommitted defensive tackle, and at 6'4" and 293 pounds, teams in need of a run-stopper are scrambling to try and land him. Missouri is the favorite, but Ohio State, Auburn, Florida State, and LSU are also options.