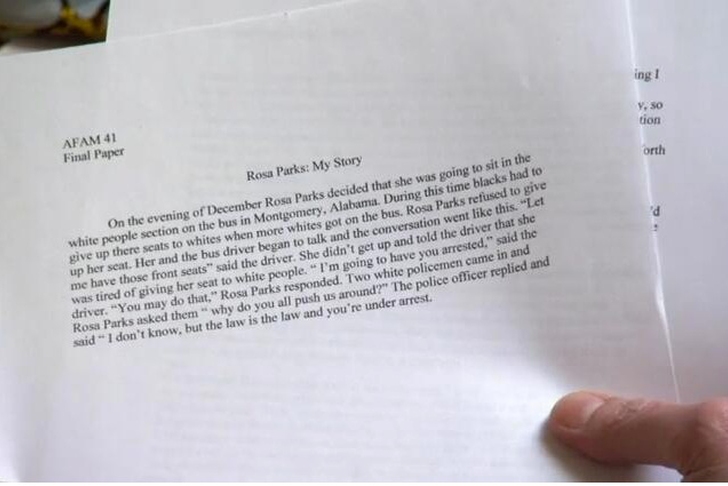 Caleb Pressley is the UNC quarterback who authored this essay, which went viral after appearing on HBO's Real Sports With Bryant Gumbel.

Pressley, currently studying abroad in Scotland, took to his personal blog to speak out on the essay, the business of college sports, and more. We'd encourage anyone who saw the essay floating around social media to hear what Pressley has to say about it (quoted directly from his own posting):

I have assembled you all here today to finally, and officially, address my Rosa Parks essay that has underwent such wicked scrutiny from media outlets across the nation over the past few weeks. Even though I am currently on a hedonic, yet platonic sabbatical in Edinburgh, Scotland, it has come to my attention that many people are very displeased with the AFAM41 final that I wrote / dictated to my iPhone Siri. The fact that I have found out about this all the way in Scotland forces me to accept the importance of this issue. I say this is because Scottish newspapers do not often discuss American college news that is unrelated to Belle Knox. This lack of American newspaper coverage is supplemented by the undeniable fact that I read on a fourth grade level. Yet, somehow through all of these obstacles, news of my essay has found me, and I now I feel it my duty to issue a response.

All student-athlete football players who now play at NCAA institutions go through a complicated recruiting process. This process begins when all of the Division I football coaches in the nation send high schools requests for the names of their best and brightest students. Once that list of all-star pupils is made and sent back to the programs, the coaches are then able to proceed by thumbing through the names one by one and inquiring into whether or not these incredible students might have any potential talent at American football. This process is done to ensure that once players finally arrive on campus, they will be students first, and athletes second.

I, on the other hand, found a loophole to get around all the pointless investigation into my academic affairs. Due to a combination of Olympic-caliber genes, and a personal blessing given to me at the moment of my birth by Pope John Paul II, by the time I was in high school I possessed the uncanny ability to throw a leather pigskin 215 yards through the air. This sensual skill seduced coaches, who were otherwise only concerned with academics, to recruit me in spite of my subpar marks in the unimportant realm of institutionalized learning.

You might say, “But Caleb, what about the minimum GPA and standardized testing scores that are required for entry into any NCAA institution?” My response is simple: “LOL!”

If major universities are tempted to alter academic information so that their star players can continue to play, do you not think it possible that a high school that is held accountable to a significantly smaller population of significantly less important people might be capable of making a slight alteration to an academic record here or there? Needless to say, right or wrong, bad or outright terrible for State fans, I became a University of North Carolina Tar Heel.

And then, before I knew it, I was enrolled in this “paper class,” in which I was told that I had to write one paper that would determine my final grade. Per uszche, I procrastinated for a bit, and ended up writing the entire essay while racing my scooter to turn it in by the deadline. I was deeply and briefly troubled by the amount of pedestrian injuries I caused on that scooter ride, but my sadness soon subsided days later when I got my grade back: A-.

Just like I used to say to my high school basketball coach, “Don’t put me in the game unless you want me to put up a few deep threes, and then get ejected for taunting.” I don’t really know how to tie that quote in to this particular story, other than just letting you know that I have so much self-confidence that it might just be a cover-up for an extreme depravity of social skills and the aforementioned self-confidence.

Shortly after news broke to the public of my short and sweet depiction of the life of Rosa Parks, all hell began to break lose. Pretty soon, my paper class professor got fired, and every step was taken to make sure he would never be involved with an academic career for the rest of his life. He wasn’t the only one though. My head coach, Butch Davis, was then fired three days before the start of our season, only later to be joined by the rest of his staff immediately after our season ended. Soon after that, Athletic Director Dick Baddour stepped down from his position, and then before I knew it the situation ultimately led to the resignation of our Chancellor, Holden Thorpe. A beautiful red cherry was placed on top of it all when our football team—that no longer contained hardly any of the parties involved in the scandal—received a one-year bowl ban (in which we would have played in the ACC Championship Game), as well as a scholarship reduction, and a few years of probation. Of course, every step of this process was well documented by major media outlets who seemed utterly shocked that collegiate athletes might not be able to compete in the classroom with more qualified students who don’t have to work a fulltime job in order to maintain their financial aid. I am no aquatic aficionado, but with all of these consequences in mind, it does seem that by this point, the whole academic scandal should be considered as “water under the bridge.”

Then along comes a woman named Mary Willingham, whom I have never met personally. Since I do not know this woman, I shall not use this forum as an opportunity to ask her why she is so intent on devaluing my Carolina Degree, or make really funny jokes about some of her questionable antics. Instead, I will focus on some of the important points she has raised that are bringing awareness to the impracticality of the current NCAA system.

As a naturally curious person, and as someone who is directly affected by this situation, I would like to ask just a few questions to whoever might deem themselves intelligent enough to answer them:

Do you think if a kid can’t read, we should 1) bring massive media attention to it and thereby humiliate the athlete in question, or 2) teach them to read? Would it be impossible for our University to offer athletes who are unable to succeed in advanced classes—by nature of their lower entrance scores and less glamorous academic backgrounds—the attention and academic programs that might be more suited for their level of learning? Whether or not these programs would qualify their participants for a full university degree, couldn’t they still be put in place in order to offer athletes a certificate, or lower degree that would enable them to take at least something away from this University, after four or five years of the University taking so much from them? Is it unreasonable to believe that athletes pursuing a regular full degree and athletes pursuing some type of lesser degree could coexist on the same football team in order to make millions of dollars for our University?

It is obvious that college football is a business. With this in mind, don’t customers want to see the best product—in this case football—put forth into the marketplace? Would this product not improve if academic standards did not prohibit the most talented athletes from partaking? Does it really make sense that all of the athletes who play football would have to be at the same academic level with the same post-athletic goals? Wouldn’t some of these talented individuals who aren’t qualified for a full university education still be good enough at their sport to later advance to the professional level, and thereby be provided extremely high paying jobs that they might otherwise never be able to obtain? Would the football team in general not benefit from having the best players on the field? And wouldn’t a better football team make more money for the university? And isn’t it proven that athletic success raises interest from prospective students, which would in turn make the University even more academically competitive?

Are all systems canonized? Is it okay to acknowledge that a system doesn’t quite make sense? Would it be okay to march for logical change to this institution that is clearly not working as it should? Would the value of Carolina degrees decrease, or be enhanced by the fact that not every athlete would have to pursue the same degree as the rest as the student body? Wouldn’t the non-qualifiers who could instead receive degrees comparable to a two-year community college be in better shape in their post-athletic careers than they would have if they didn’t have someone to fund and provide this type of education for them? Who gets hurt in these situations? Is change inherently evil? Can obvious concepts such as independence between different levels of learning coincide with a community that values what every member of the institution brings to the table?? Do we really want diversity? Do we really care about the advancement for all contributors to the University of North Carolina?

As some of you might already know, it was not in fact me who wrote the Rosa Parks paper. However, what is true is that I never would have had the opportunity to attend the University of North Carolina had I not been a good football player. I had many friends in high school with better grades and SAT scores than me who were denied entry to this university. The only reason I was accepted is because I have a semi-automatic weapon for a right arm, and because I blackmailed many powerful people with connections to the school. However, I like to believe I am still able to contribute to the culture and community of UNC, and I think the same can be said for the vast majority of the football team that I have been lucky enough to be a part of.

Let’s just call college football what it is: a big business. This is the first step in effecting change in which, instead of being ridiculed, under qualified athletes—who are undeniably assets to the University of North Carolina community—can continue to contribute, and receive academic support appropriate to their needs. I salute everyone across the country that has made it his or her duty to take this first step. I would join in, but I’m far too busy drinking Scotch and going for the Ripley’s land speed record for football throw.

P.S. Regardless of what it might seem like in the media, this problem is NOT isolated to UNC.