The Top 3 Storylines In SEC Football For 2015 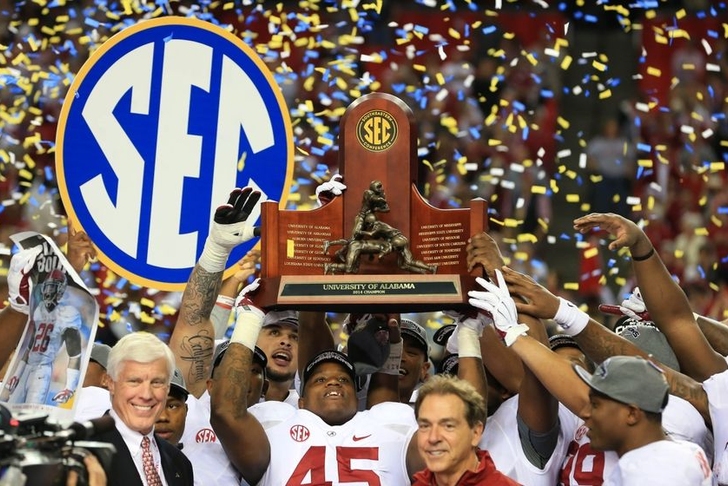 The SEC remains THE premier conference in all of college football heading into the 2015 season, with multiple teams poised to make a run at College Football Playoff glory. With that being said, here's our list of The Top 3 Storylines In SEC Football For 2015.

The Alabama Crimson Tide have shown cracks in the facade this offseason, as head coach Nick Saban's normally iron-fisted rule over the program seemed to slip in a muck of off-field controversies. On the field, with no Amari Cooper and a QB competition that has been less than reassuring at points for Tide fans, the Tide seem more vulnerable than they have been since Saban's first year in Tuscaloosa back in 2007. If things start to crumble a bit, the SEC will be wide open for a dark horse to claim the throne come conference championship season.

2. What Do We Make Of The Jim McElwain Era?

Florida's offense was an absolute dumpster fire for large stretches of Will Muschamp's last season in Gainesville. That should change under former Colorado State head coach Jim McElwain. McElwain's air-it-out offensive philosophy took the tops off of secondaries even with the limited talent pool he had to work with at CSU. Imagine what he'll be able to do with the recruiting force of the Gators brand behind him.

It may not all come together in 2015, but it'll be intriguing to see just how things shape up in year one.

The Vols improved from 2-6 to 3-5 in SEC play in head coach Butch Jones’ second year with the program. After picking up a bowl victory, adding another elite recruiting class and watching quarterback Josh Dobbs and running back Jalen Hurd grow by leaps and bounds in the offseason, expectations at Tennessee are through the roof.

Keep an eye on Week 2 when the Oklahoma Sooners travel to Knoxville for one of the biggest non-conference games in all of the SEC this year. If they can upend Bob Stoops' crew, Big Orange nation may be in for a magical ride

The 5 Best Stadiums In The SEC