The Top 3 Storylines In ACC Football For 2015 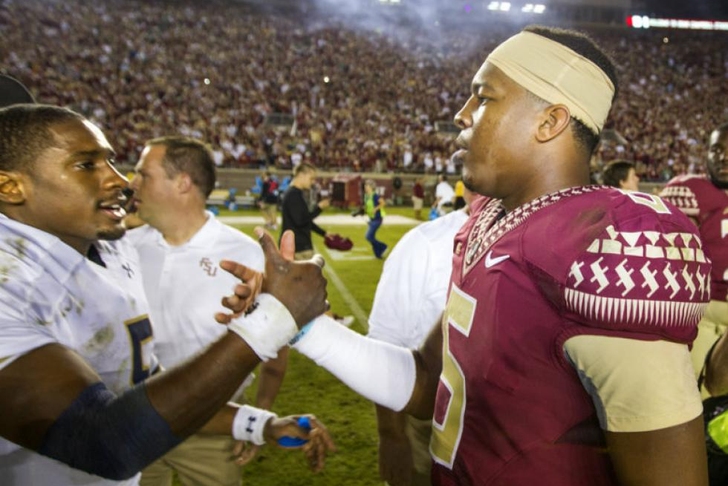 The ACC promises to be more competitive and wide open than ever in 2015, providing top-level college football and intrigue every step of the way. Here's our list of The Top 3 Storylines In ACC Football For 2015.

1. The Exit Of Jameis Winston

The end of the Jameis Winston era of Florida State Seminoles football brings with it plenty of questions. First and foremost, how exactly will Everett Golson do making the jump from South Bend to Tallahassee? Golson ended his Notre Dame stint in a flurry of turnovers and unfulfilled potential, but he'll have plenty of weapons at his disposal at FSU to prove his doubters wrong.

The entire season may not hinge on his arm, but his work replacing Winston will be the dominant storyline in the conference all year long. Georgia Tech was the talk of the conference last year, finishing 11-3 thanks to a dynamic triple-option attack that ran opponents right off the field. Quarterback Justin Thomas led the team with 1,086 rushing yards, but he now goes forward without the potent ground trio of Synjyn Days (924), Zach Laskey (851) and Charles Perkins (443). There's plenty of talent waiting in the wings (including redshirt freshman CJ Leggett), but that's still a lot of production to replace in a limited amount of time.

3. Is Brad Kaaya Ready To Lead The Canes All The Way Back?

The Hurricanes are in the middle of another retooling process, but the reigning ACC Rookie of the Year is going to be a valuable constant for an offense now without WR Phillip Dorsett, RB Duke Johnson and TE Clive Walford. Kaaya threw for 3,198 yards and an ACC-best 26 touchdowns with a sterling 148.2 passer rating in year one. Teammates say he's taking initiative this offseason, molding the offense to his skill set. For Miami to make the leap back to prominence, he'll have to continue building confidence both on and off the field.