The 8 Most Likely Teams To Make The 2016 Final Four 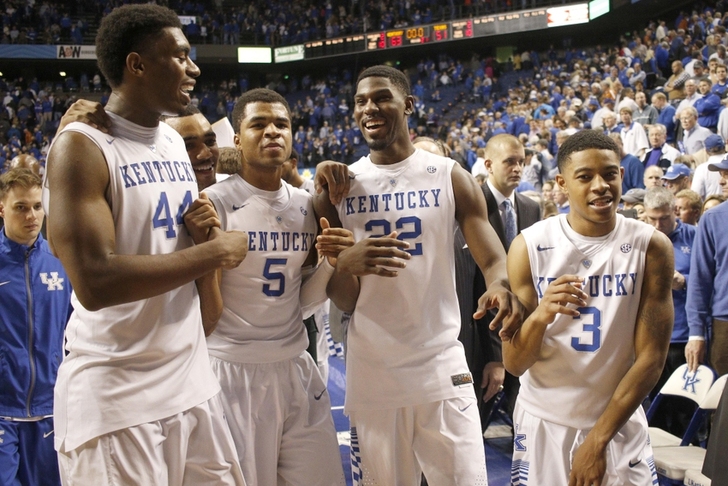 The 2014-15 college basketball season has come to a close, but it's never too early to look ahead to next season. Here are the eight teams that are the most likely to be in the Final Four in 2016:

Key starters Travis Trice and Branden Dawson will be gone next season, but they'll be replaced by West Virginia transfer Eron Harris and McDonald's All-American Deyonta Davis. Plus, Tom Izzo is still Michigan State's head coach, and he'll have his team playing at a high level.

Villanova loses three starters from last year's team that won the Big East and grabbed a No. 1 seed in the NCAA Tournament, but Big East Sixth Man of the Year Josh Hart and McDonald’s All-American Jalen Brunson are very capable replacements.

Freshman Kelly Oubre has already declared for the NBA Draft, but the Jayhawks will still be in good shape for 2016. Even if they lose forward Chris Alexander to the draft as well, Kansas will return five of their top seven scorers and welcome in another highly-rated recruiting class.

UNC will return all 10 of their rotation players if no one elects to enter the NBA Draft, and it doesn't appear that anyone is going to. Head coach Roy Williams will have a veteran team and a loaded roster headlined by star point guard Marcus Paige.

Everyone will be back for the Terrapins (with the exception of graduating senior Dez Wells), including star point guard Melo Trimble. Maryland was a small team last year, but five-star center Diamond Stone and forward transfer Robert Carter turn this team into one of the most dangerous in the country.

Iowa State will return six of their top eight scorers, and the arrival of transfers of Hallice Cooke and Deonte Burton will add depth for the Cyclones.

Virginia will only lose starting forward Darion Atkins from this year's team, but he'll be easily replaced in the lineup by center Mike Tobey. As long as Justin Anderson returns to school (as expected), UVA will be the favorite to win the ACC for a third consecutive year.

Kentucky will lose several of their key contributors from this season's 38-1 team, but they'll still have plenty of talent left over for next year. Tyler Ulis, Dakari Johnson, Alex Poythress, and Marcus Lee (maybe more) are all expected to stay, and they'll be joined by another class of five-star recruits featuring Skal Labissiere, Isaiah Briscoe, and Charles Matthews. Assuming head coach John Calipari doesn't bolt for the NBA, the Wildcats will be at the top of the standings again.