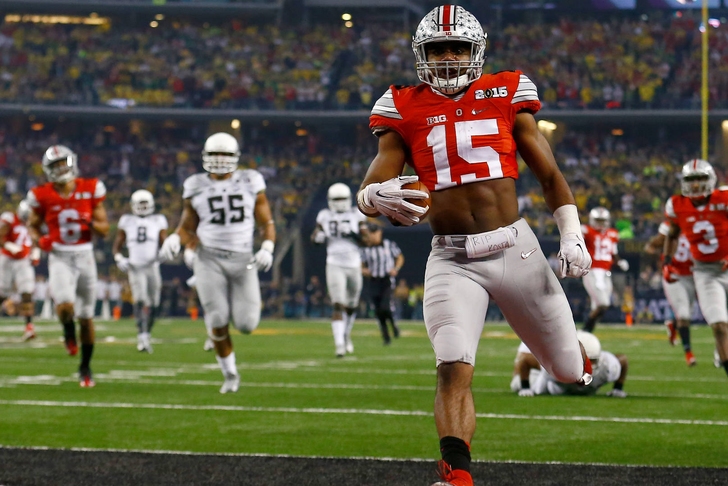 The Big Ten has always been a running back's conference, especially with the number of in-conference cold weather games which make passing an adventure. That makes these next five guys even more valuable than they'd be in other conferences around the nation. Here's The 5 Best Running Backs In The Big Ten For 2015.

Donovonn Young is gone, so it's Josh Ferguson's load to bear for the Illini. He's been a consistent ground threat for the past three years, and that consistency doesn't look to taper off with more carries to utilize. After posting a 5.03 yard-per-carry average in 2014 we're expecting close to 1,000 yards and double-digit touchdowns (he had nine last season) this time around.

Lynch did his work behind one of the worst offensive lines in the Big Ten while also splitting touches with Bill Belton in 2014. However, Lynch turned it on late, rushing for 393 of his 678 yards in the team's final four games. The offensive line appears to be in at least marginally better shape in 2015, giving Lynch a bit more room to approach the magical 1,000-yard mark.

Jackson joins our #1 entrant as one of the only two 1,000-yard rushers in the Big Ten to return for 2015. Most of the Wildcats' offensive line is back, provinding continuity for Jackson to take full advantage of his unyielding patience and smarts when it comes to picking his spots to exploit.

Clement gets his chance to shine as the Badgers' feature back with Melvin Gordon beginning his pro career with the San Diego Chargers. Everyone seems to forget that Clement racked up 949 yards and 9 touchdowns last season, Clement's next-level vision and shiftiness in traffic gives him the nod at #2.

The race for best running back in the nation boils down to Elliott and Georgia's Nick Chubb, with surrounding weapons and pure destructive force favoring Elliott. Elliott is the football equivalent of a five-tool player, with speed, power, vision, escapability and backfield receiving skills to spare.