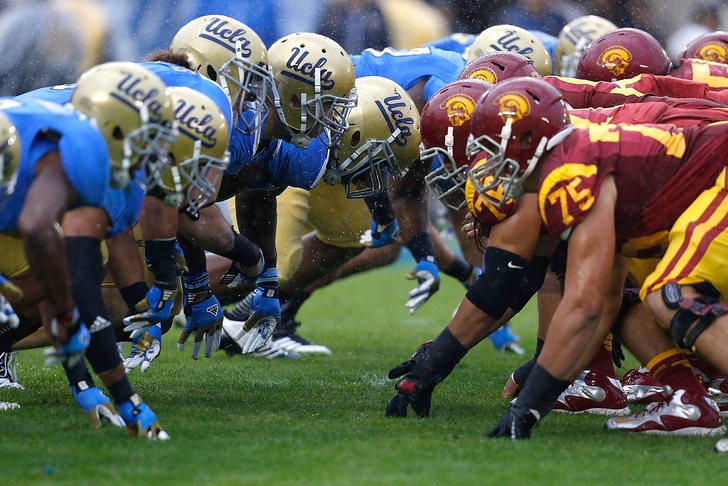 The top recruits have made their decisions, the dust is starting to settle, and we can finally start to declare the winners and losers of 2015's National Signing Day.

The Pac-12 did extremely well for itself this year, with several teams making major moves as the clock wound down. Let's take a look at the Pac-12's four best recruiting classes:

The Sun Devils vaulted themselves into the top four with an impressive finish to this signing period - three of their top 5 recruits (and 5 of their 21 total) committed in 2015, with 4-Star Joseph Wicker (#6 overall DE) picking the Sun Devils on signing day in a major upset.

Player to watch: 4-Star QB Brady White is the #4 pro-style QB in this recruiting class, and he has all the tools he needs to be a sensational college quarterback. He might not be able to beat out Mike Bercovici for next year's starting job, but he'll be ready sooner rather than later.

The Ducks put together a very solid (if unspectacular) recruiting class in 2015, and we don't expect them to take a step back next season even with Marcus Mariota off to the NFL. Oregon's coaching staff rarely puts too much stock into star ratings, and they've made NFL starters out of enough 3-Star prospects that Ducks fans really shouldn't pay much attention to signing-day rankings like this one.

Player to watch: 5-Star DE Canton Kaumatule is an absolute monster, and we'll be very surprised if he doesn't make an impact as a true freshman.

Talk about a strong finish.

The Bruins had a perfectly respectable signing class heading into Wednesday, but no one expected them to own National Signing Day quite like they did. Three recruits rated in the top 10 at their position committed on signing day, with #2 overall RB Soso Jamabo, #2 overall TE Chris Clark and #6 overall OG Josh Wariboko all turning away heavy interest from elsewhere to join the Bruins. #5 overall LB Roquan Smith may be coming as well, but that depends on what happens with UCLA DC Jeff Ulbrich, who may or may not be leaving for the Atlanta Falcons. With such a loaded class already signed, though, losing Smith wouldn't knock the Bruins out of 2nd.

Player to watch: As good as the previously-mentioned players are, the star of this show is QB Josh Rosen. Already enrolled and in classes, Rosen is the #1 pro-style QB in the Class of 2015 and is expected to step in for Brett Hundley right away. He's up to the challenge.

How do you top UCLA's signing day rampage? USC already had one of the nation's strongest classes going into Wednesday, and they merely added the #4 overall player in the Class of '15 (CB Iman Marshall) and the #4 DT in Rasheem Green. 5-Star OLB Porter Gustin committed Tuesday, and the Trojans are sitting pretty with the #2 overall class in the entire country (per the 247 composite rankings). Rivals has USC at #1, and they could be looking at the nation's best recruiting class by the time the fax machines turn off.

Player to watch: CB Iman Marshall is one of the best defensive backs to come out of California in years, and he'll be able to make an immediate impact for the Trojans.