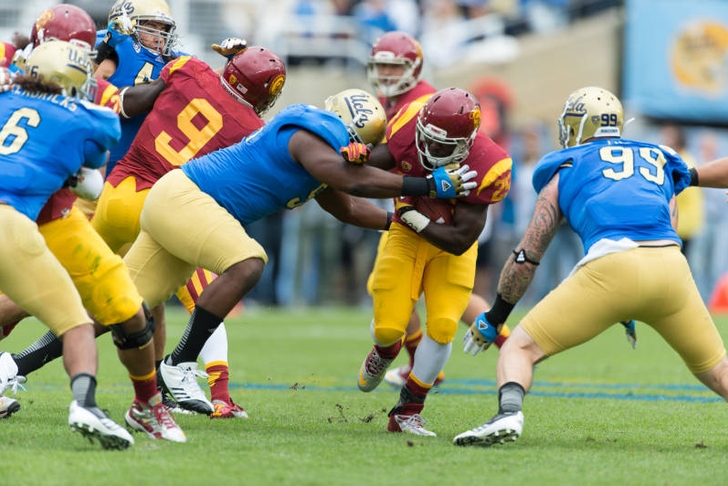 The dust is starting to settle, and 2015's final recruiting classes are pretty much in the books. Which schools hit their targets on National Signing Day? Who swung and missed? Let's take a look...

The Bruins had a perfectly solid recruiting class heading into Wednesday, but they absolutely cleaned up once the faxes started rolling in. #2 overall RB Soso Jamabo and #2 TE Chris Clark were both heavily tipped to go elsewhere, but they're both headed to Westwood. 4-Star OG Josh Wariboko is also on his way, and 4-Star WR Cordell Broadus (also known as Snoop Dogg's son) snubbed USC to become a Bruin. For a UCLA team losing QB Brett Hundley, this is a real statement of intent.

The Rebels were finalists for a number of top prospects, but ended up walking away without any of their 5-star targets. While this is still a perfectly solid recruiting class for Hugh Freeze & company, it could have been so much more.

The Gators jumped 45 spots in the 247 composite class rankings on signing day, with Top 10 overall recruits Martez Ivey (#1 OT, #2 overall) and CeCe Jefferson (#2 DE, #7 overall) signing with Jim McElwain's team. UF might not be back to their Tebow-era heights next season, but they're definitely headed in the right direction.

Al Golden couldn't pull any of his 5-star targets, and Clemson and Florida State both ended up with more talented classes. The Hurricanes have been consistently decent under Golden, but that just isn't enough for a fanbase used to perennial contention. This recruiting class is unlikely to help the Canes get back to where they want to be in the ACC.

The Trojans one-upped their cross-town rivals with commitments from #1 CB Iman Marshall (#4 overall) and #5 DT Rasheem Green (#23 overall). USC is now above Alabama according to several recruiting services, and while they didn't have as far to climb, this strong finish is still a major win for Steve Sarkisian's team.

They aren't getting as much attention as some of the heavy hitters out there, but Pitt's recruiting class this year is absolutely brutal. They're somehow 13th out of 14 teams in the ACC, and another one of their top prospects (Altoona's Kevin Givens) flipped to Penn State in the hours leading up to signing day. For a program that talked a big game in the weeks leading up to signing day, this isn't the finish they had in mind.

The 4 Best Recruiting Classes In The Big 10

The 4 Best Recruiting Classes In The Big 12

The 4 Best Recruiting Classes In The ACC