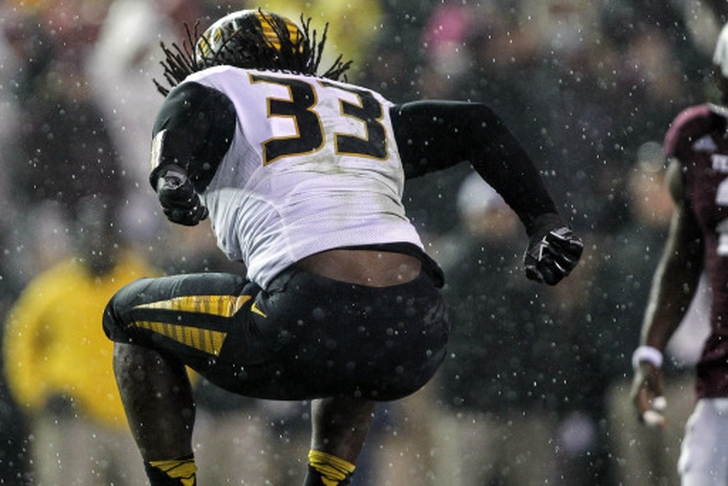 - I covered the Stanford vs. Cal game on Saturday. I shoot video during the games so I run around following the ball most of the time, great workout. When you’re photo you get these GIANT vests to wear. By giant I mean it fits everyone else, except me. I could use the damn vest as a blanket to cover my whole body. I don’t already look young enough, so go ahead and throw a huge vest on me. People on the sidelines probably think, “Where are her parents? Should we tell security a child is loose on the sidelines?”

- While we're talking about ugly media vests, there’s another thing that makes me say, "huh?" The media vests have giant numbers on the back. So, sometimes I hear people screaming out a number like…“HEY!! NUMBER 115!! YOU’RE HOT!! YEAH 115!! WE LOVE THE MEDIA!!” Thanks for the compliment, bro. Do you think I’m going to turn around now, go find you in the crowd,  and give you my phone number? No, so just watch the game and shut your face.

- Ole Miss, you could be playing for a division championship if you win out (and a few other things happen) and you can’t even score - and allow six turnovers. WHAT. QB Bo Wallace’s go-to man Laquon Treadwell isn’t there anymore, I get it, but you’ve got to create other opportunities on offense. When you have six turnovers, it’s very hard to get going and get in sync on offense.

- Ole Miss' red zone offense. Arkansas intercepted two balls that could have been TDs for the rebels. You. Just. Can’t. AND it was in the SAME spot both times.

- Mizzou’s offense had one too many dropped passes in the first half. Go get yourself a bucket of pine tar and coat yourself with it before the game, then wherever the ball hits on your person, it'll stick. Problem solved, easy as that. Some dropped passes were just...come on, man, this is college football; you need to catch the ball if you want to score.

- Mizzou had too many rookie penalties on offense during the game. Lots of false starts some from veterans on the team. This is the end of the season; these shouldn’t be recurring mistakes.

- I love the no-huddle offense, but things can go wrong during the hustle and bustle of getting the play started. For Mizzou, it was the ability to hear the snap count in a loud atmosphere. During the third quarter, sophomore QB Maty Mauk was looking to the sidelines and junior center Evan Boehm snapped the ball while Mauk’s eyes were still on the sidelines.

- Seeing a senior get injured right before or during the season is always such a bummer. Senior Justin Worley was Tennessee’s starting QB until he injured his shoulder recently, and he'll be out for the remainder of the season. It was senior night for the Vols on Saturday. As Worley ran out with a sling/brace contraption on his arm, I wanted to cry for him. That’s definitely something that tugs at my heartstrings, which not a lot of things do. To bust your ass all season and have an injury get in the way...just really hard to see.

- “Girls, Jesus, and Marcus Mariota.” This question/answer during Oregon’s presser is epic. Watch it.

- Arkansas has now shut out their last two opponents – LSU and Ole Miss. Those scores scream one thing: defense. Arkansas’ front seven are some scary dudes.

- Arkansas completely stopped Ole Miss from any type of gains on the ground to move the chains. The Arkansas rush defense allowed Ole Miss to gain just 63 yards.

- Tennessee sophomore QB Josh Dobbs’ is majoring in aerospace engineering. A division one quarterback learning how to craft airplanes and spaceships - that’s so freaking cool.

- Tennessee's defense – ranked 68th in rush defense, 35th in pass defense, 44th overall - forced Mizzou into three three-and-outs in a row in the first quarter. Mizzou started deep in their own territory a few times too thanks to excellent ball placement by Tennessee’s punter. That’s one way to put the hurt on an offense.

- I think the Vols did a great job disguising their offense. There was so much movement up front that I had no idea where the ball was half the time. If I was trying to stop Tennessee’s run it would have been game over from the start.

- Tennessee’s disguised offense got even more camouflaged when the Vols tried a fake FG and got a nice, wide-open touchdown out of the play. Dobbs hit the receiver right in stride. It looked so dirty. Then afterwards, everyone was a little too excited and had ants in their pants. It’s pretty hilarious...check it out.

- HOLY MIZZOU DEFENSE. I think they’re the monsters under my bed that I was afraid of when I was a kid. But seriously, these guys are so talented and fun to watch. I think they’re the backbone of Missouri’s success. The defense is always on, always making plays to allow the offense to have more opportunities. Mizzou leads the SEC with 40 sacks. They had six sacks and 12 TFLs against Tennessee. And, the Tigers get this many sacks with rushing only four. It’s magic.

- Mauk’s ability to run impresses me every time I see him take off for the first down. What else impresses me...the running backs ability to block when Mauk takes it himself. That’s big.

- Mizzou senior running back Marcus Murphy didn’t stop pushing through the defense until the refs ended the play. In the second quarter, he got knocked off his feet a bit and regained control enough to run a few more yards for a touchdown that put Mizzou up 13-10 against the Vols.

- OH YEAH, Mizzou used the tight end vs. Tennessee! Sophomore Sean Culkin had two catches for 18 yards. If he’s open off of a mismatched defender, then use him!

- Mizzou senior Jimmie Hunt had a beautiful 73-yard TD in the fourth quarter that was a total game-changer. Just look at how pretty it was. (scroll to the end)

So what about ARKANSAS vs. MIZZOU?

- I hope it's not a struggle, like this guy.

- Mizzou’s offensive line has to protect Maty Mauk from a front seven that can do bad things to those who don’t stick together. The o-line cannot have as many penalties as they did against the Vols. The loss in yards will kill them against Arkansas. Every yard will count in this game.

- I believe Mizzou can outplay Arkansas, I really do. I think it comes down to whether or not the Tigers can execute and put what they practice into what they preach on the field.