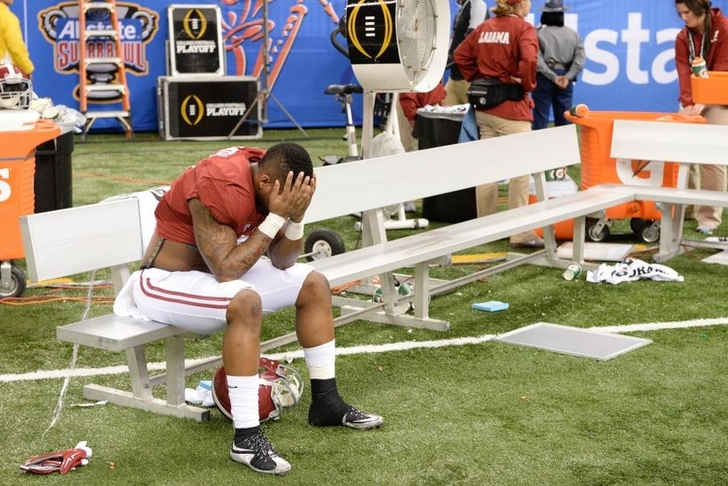 For the SEC teams that played in bowl games this season, here are some New Year’s resolutions to follow in the coming season.

First of all, the SEC West must never shame the SEC again like it just did with its bowl performances this season. You’re all better than that.

SOUTH CAROLINA – Use the win over Miami to keep momentum up for next season. Fix the defense, so it can help create opportunities on offense. Gamecock fans – don’t give up on Steve Spurrier, he’s a smart coach.

TEXAS A&M – Kevin Sumlin needs to coach Kyle Allen into a star. Allen has great potential. A smarter, better decision-making Allen will make the Aggies look like a different team.

ARKANSAS – Defensive weapon Trey Flowers is gone in 2015, but 1,085-yard-rusher Jonathan Williams will return for one more season. Make Williams and RB Alex Collins the 'terrible two' rushers of the SEC, and the rest will follow.

LSU – Find a quarterback; a pocket passer would be nice. Make every male student at LSU go through a walk-on tryout. Or, coach up the two QBs on the roster who saw action in 2014 – Anthony Jennings and Brandon Harris. Harris started once, while Jennings played the rest of the season. Neither had a jaw-dropping game during the season.

GEORGIA – Keep Nick Chubb alive and well. Find another offensive weapon to rely on when Chubb isn’t being Chubb.

OLE MISS – The Rebels need to get healthy and stay healthy after a season full of injuries. More importantly, the offense needs to get reshuffled after an awful bowl performance against TCU. Ole Miss’ offensive line needs to prove it can protect a quarterback, and the offense needs to learn to run between tackles.

MISSISSIPPI STATE – Make Dak Prescott stay for his senior season. The Bulldogs have a lot of key players that will be even better next year. Prescott + familiar weapons on offense and defense = good things.

AUBURN – Let new defensive coordinator Will Muschamp come in and work his magic. A newly-formed dominant Auburn defense will help, a lot. If that happens, the offense won't have to ride in and save the day every game.

MISSOURI – Senior wide receivers – Jimmie Hunt, Bud Sasser, Darius White – will graduate at the end of the school year, but a promising run game is alive for next season. Quarterback Maty Mauk looked like a gazelle on his feet during the Citrus Bowl. Mauk can play a big part in the run, as well as Russell Hansbrough and Morgan Steward. Steward did not play this season due to a hip injury. If he comes back with fresh legs, watch out. He proved his talents during last year’s Black and Gold spring game when he rushed for three touchdowns.

TENNESSEE – Stay healthy. The Vols have youth on their side, and more than one star will stay on Tennessee’s roster for next season like – QB Joshua Dobbs, RB Jalen Hurd, CB Cameron Sutton, and DE Derek Barnett.

FLORIDA – Be patient with new coach Jim McElwain. Arkansas’ Brett Bielema didn’t bring the Razorbacks to amazing heights during his first year as coach. It took more than a year to see change for the better - don't ditch McElwain before he has the chance to make an impact.