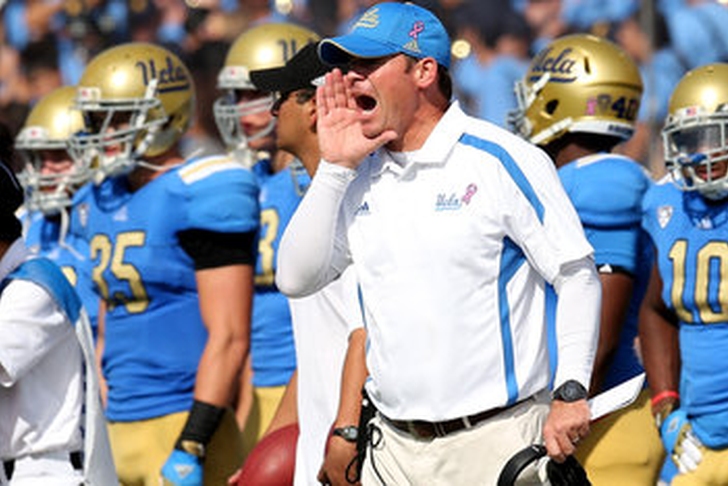 Hey, national signing day 2014 is just 252 days away. That means coaching staffs have already been recruiting this class for more than 100 days (or several years, more probably) and already have their top targets picked out. Like college admissions, college football recruiting is largely about the players junior season in high school, with a little bit of sophomore and senior year sprinkled in.

Well those junior years are officially over and the class of 2014 is up next on the college recruiting landscapes. Consensus top Da'Shawn Hand (DE - Woodbridge, VA) has offers from just about every school in the country, but he isn't really considering any Pac-12 schools.

The top player that is really being targeted by the conference is Adoree' Jackson (CB - Gardena, CA). Jackson (@AdoreeKnows) hails from Serra High School, which has sent 11 kids to Pac-12 schools in the last three years, including the likes of USC's Marqise Lee and Robert Woods. According to Rivals, Jackson has offers from every school in the conference except Stanford.

All told, there are 14 players in the Rivals Top-100 from Pac-12 territory. Jackson is tops, followed by fellow five-star recruit Joe Mixon (RB - Oakley, CA). Mixon (@Joe_MainMixon) has offers from 11 schools in the conference and is considered as polished of a running back as they come out of high school. He supposedly favors USC, as do many players when the Trojans first drop them an offer. But he also has eyes for the hometown Cal Bears and countless other schools around the conference and nationally.

The top quarterback in Pac-12 territory is Kyle Allen (QB - Scottsdale, AZ). Allen (@KyleAllen_10) recently announced that he had trimmed his list of prospective schools to five, with UCLA being the lone Pac-12 school to make the cut. That left Arizona State, Allen's hometown team who had long been courting him, crushed. But they can't really complain about being put behind the likes Notre Dame and Ohio State, two of the other schools on Allen's shortened list, which also includes Oklahoma State and Texas A&M.

Not far behind Allen is fellow pro-style prospect Keller Chryst (QB - Palo Alto, CA). While Allen went relatively unrecruited by the conferences top programs, Christ has offers from Stanford and USC that he is entertaining, as well as Arizona and defending national champion Alabama. USC isn't in dire need of a quarterback, having recruited three top prospects in the last two years. But for all the Cardinal now, hometown kid Chryst could be Andrew Luck 2.0. Probably not, but any program would be lucky to have him if he's even close to Luck.

Could Allen or Chryst be throwing to the region's top wideout recruit, Jalen Brown (WR - Phoenix, AZ)? Coveted by 10 schools in the conference so far, including UCLA (Allen's potential destination) and Stanford (Chryst's potential/probable destination), Brown doesn't have standout speed, but is well-sized at 6' 2" and has shown great playmaking ability with his hands, as well as a dedication to the classroom that many schools covet. Brown is also considering USC, Vanderbilt, Michigan, Northwestern, Virginia and even Yale.

This year, the top "athlete" in Pac-12 territory is Michiah Quick (ATH - Fresno, CA). Quick (@ItsQuicker) plays wide receiver right now, and chances are most schools want him as that. But as is always the case, his recruitment could depend on what position a school wants him to play. He has offers from top schools around the country, including Oregon, UCLA and USC in the Pac-12. Smart money seems to be on him signing with the Trojans after the success Lee has had with the program as a former "athlete"-turned-wideout.

Finally, there is the all-important offensive line. Casey Tucker (OT - Chandler, AZ) is tops in that category around the Pac-12. Tucker (@CaseyTucker77) was a one-time verbal commit to USC, pledging his allegiance to Troy just four days after they offered him a scholarship. He has since rethought that and opened up his recruitment, but the Trojans still seem to be in the lead.

Now you may have noticed there isn't a lot of talk about Oregon and Stanford, the conference's top two programs over the last five years. It's still a little early for the Ducks, who are notoriously late to the table in their recruiting efforts, preferring to make a huge and flashy last-minute push than slowly convincing a player to come (think De'Anthony Thomas). Stanford rarely recruits the top guys, instead finding the players they think will fit best in their system, obviously with tremendous success (for example, second-round draft pick Zach Ertz was a 3-star recruit out of high school). On the other hand, almost every recruit seems tied to USC in some way because the Trojans almost always give very early offers to the nation's top players and their top targets, hoping to wow the recruit into a commitment with what is a dream offer for many (such as Casey Tucker).

Check out the updating Pac-12 2014 recruiting rankings from Rivals.com here.