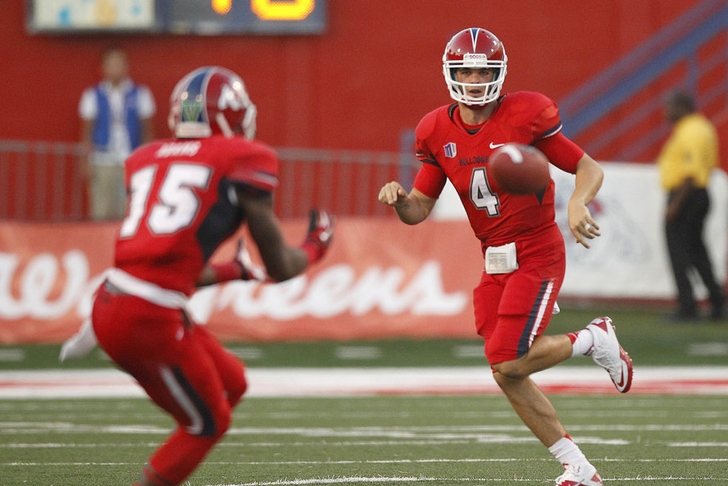 Bowl season is here! With four bowls being played on Saturday, there are plenty of 2014 NFL draft prospects showcasing their skills. The marquee match-up for Saturday's bowl games is the Royal Purple Las Vegas Bowl with No. 20 Fresno State Bulldogs taking on the No. 25 USC Trojans. Both teams have a number of draft-eligible prospects.

As the game goes on we are going to update what the prospects are doing along with giving a final performance breakdown once the game is over.

The Fresno State offense has been incredible in the Mountain West Conference through the air led by senior QB Derek Carr. Carr threw for 4,866 yards and a 48/7 TD/INT ratio. Take this little nugget with you as well, Carr started three seasons for the Bulldogs and has a career 111/23 TD/INT ratio, WHAT? The Bulldogs have ran a spread out offense and some scouts may see that as a disadvantage for Carr along with the competition he has faced in his career. This bowl game is a very important step for Carr to prove to the NFL scouts that he can do it against stiffer competition (USC owns a top 25 defense in points against).

junior WR Marqise Lee. Lee missed three games due to injury this season and has only put up 673 yards and two touchdowns. Both numbers are way, way down from his first two at USC and the Las Vegas Bowl is the first step for Lee to show the scouts that these stats were results of questionable play-calling, inconsistent QB play and nagging injuries rather than a complete skill drop-off.

***All three players will decide future after bowl game.

First drive: Marqise Lee saw three targets, catching two for 14 yards and a TD. The touchdown was from 10 yards out as Lee did a great job of slowing down then cutting in at the top of his route to give his QB an open target.

1:08pm: (Drive 2) Marqise Lee on sideline getting right shin and ankle looked at and taped up.

2:12pm: Lee catches 10-yard in route and does the rest with his wheels, beats all defenders to left front corner pylon for 40-yard touchdown.

3:15pm: Lee does great job of getting open when QB is under pressure and scrambling as he finds soft spot and comes back to the ball.

3:54pm: Marqise Lee takes a curl route and runs around cornerback up the sideline for big gain. Shows track speed once again.

(Drive 1): Called for defensive holding as he was grabbing onto receiver down the field.

(Drive 2): Got good pressure from the corner to flush Carr out of the pocket.

2:03pm: Bailey has been all over the field, playing up in the box, looks very comfortable there.

2:44pm: First play of second half Bailey once again in on the play and tackles Adams behind the line.

3:39pm: Bailey has been a bit quiet since the first series of the second half.

First Drive: Carr had short field to drive down. Finishes 2-3 for 23 yards and 1 TD. Touchdown pass came on a quick slant to the slot receiver for 8-yard TD. Three and out for Bulldogs, Carr goes to sideline and has trainers with him on the bench.

2:23pm: Been nothing short of a terrible first half for Carr, relentless pressure in his face, a couple dropped passes and a few poorly thrown balls.

3:26pm: Carr trying to force the ball into Davante Adams throws interception in the endzone. From what I've seen this game, Carr doesn't really work through his progression? Just a note.

First drive: Adams is on the other end of Carr's first pass attempt, a 15-yard fade down the sideline in which Adams made great catch and got both feet down along the sideline. Even a catch in the NFL.

1:57pm Drive five:Stretches out body to go up and catch high pass on WR-screen, gets helmet to the ribs. Trainers tending to him now on the field.

2:01pm Adams back out on field and makes five yard reception on smoke screen.

2:16pm: Adams shows his great hands after having to catch pass thrown high and behind him, used big hands to pluck ball out of the air.

2:49pm: Adams runs stop and go route, adjust well to come back to ball and go up and get it for 23-yard TD. Adams great at getting the ball at it's highest point and adjusting to the ball. Seen that twice this game.

4:04pm: Unspectacular play on a WR screen but once again showed natural hands as it appears the ball just stops when it hits his hands.

2:34pm: Derron Smith's so-so first half could be product of poor defensive play around him. Can't do it all.

3:04pm: Smith showed some serious speed flying up from his safety position on a blitz to provide pressure on Kessler forcing a bad throw.

3:32pm: Next play Derron Smith takes an interception back to the endzone for a pick-six. Welcome to the game Mr. Smith.

3:50pm: Smith came flying up from safety spot once again and assists on tackle in the backfield coming around the corner. Plays hard every play, very high motor. Looking to help his stock if he decides to go to the NFL.

3:54pm: Smith runs down the speedy Marqise Lee after a cornerback misses the tackle. Derron Smith has to be one of the faster defensive backs coming into this draft.

Davante Adams: 13 targets 9 REC 74 YDS 1 TD Saw great hands and adjusting ability, day could have been much better had Carr been able to hit him on a couple poorly thrown passes.

Derek Carr: 29-54 217 YDS 2 TD 1 INT No doubt his worst game statistically this season but with relentless pressure from USC, horrible offensive line play and dropped passes the numbers look even worse. I will say that Carr did miss his fair share of throws though that you aren't used to see from him.

Dion Bailey was all over the field in the first half and showed he is capable of playing deep safety, up in the box and in slot coverage. Second half slowed down a bit but still a very strong showing for him today.

Derron Smith had a quiet first half as the Fresno State defense as a whole was dominated. Smith however showed up big in the second half, applied pressure from blitzing up the middle, around the edge and showed good deep ball coverage skills. Added a pick-six in which he leaped about six yards to get to the pylon. Displayed great speed and aggression all game long.