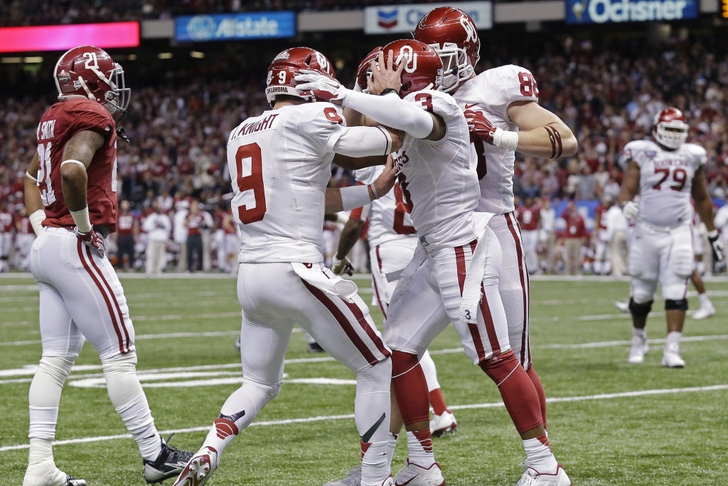 Al King and I split this game up because of the amount of NFL prospects playing. For Al’s recap of the Alabama players, click HERE.

Colvin has been a two-time first-team All-Big 12 conference selection since returning to the cornerback position after playing strong safety during his sophomore year. The 6-foot, 192-pound corner recorded 49 tackles, five tackles for loss, one pick, three pass breakups and four passes defended.

Colvin is solid in run support. That shouldn’t be a surprise, given that he played safety for a year. He recorded six tackles, five of them solo, against Oklahoma. Colvin looked good in pursuit.

Colvin took the occasional bad angle in pursuit. He played too far off in coverage for my tastes, but that might be by the coaches’ design. He never jumped off the screen in pass coverage.

Colvin didn’t do anything to affect his stock either way. He has a chance to help himself at the Senior Bowl.

Colvin has great size for a corner, but looks a little unpolished in coverage. If he bulks up, he could make it as a safety at the next level. His versatility might get him drafted higher than he otherwise would.

Saunders was a first-team All-WAC selection at Fresno State before deciding to transfer to Oklahoma. The 5-foot-9, 157-pound wide receiver caught 56 passes for 654 yards and six touchdowns during his senior year. He also retuned 18 punts for 302 yards and two scores.

Saunders jumped off the screen with his five-catch, 75-yard, two-touchdown performance. He ran a great route on his first score and made an impressive over-the-shoulder catch on his second. He took a big hit during the game, held onto the ball for a catch and got right back up. Given his smaller size, that is good to see.

He had a pass deflect off his fingertips that was intercepted. It wasn’t really his fault, but it would have been nice to see him make the catch. He doesn’t really block, he just kind of gets in the way.

Saunders looked electric with the ball in his hands. He has a chance to improve his stock further in the Senior Bowl.

Make no mistake; Saunders’ small stature is a problem. His role at the next level will likely be limited to slot receiver and return specialist. However, he has the potential to be a dynamic player in both of those roles.

Ikard started his career at left guard, before sliding over to center full-time before his junior year. Ikard was a Walter Camp First-Team All-American this year.

Ikard makes the calls at the line, which is something NFL personnel like to see. It looked as if Ikard got beat on the first play of the game, but it was a poorly-designed pull play and there was nothing Ikard could do about it. He has quick feet and can move.

Ikard seems to lack ideal strength, which limits his value.

Ikard didn’t do anything to help or hurt his stock.

Ikard has proven he can play guard or center, and that versatility will help him at the next level. While he lacks ideal strength, his ability to move will be appealing to a zone-blocking team. Ikard could be a Day 3 prospect that develops into a respectable starter.