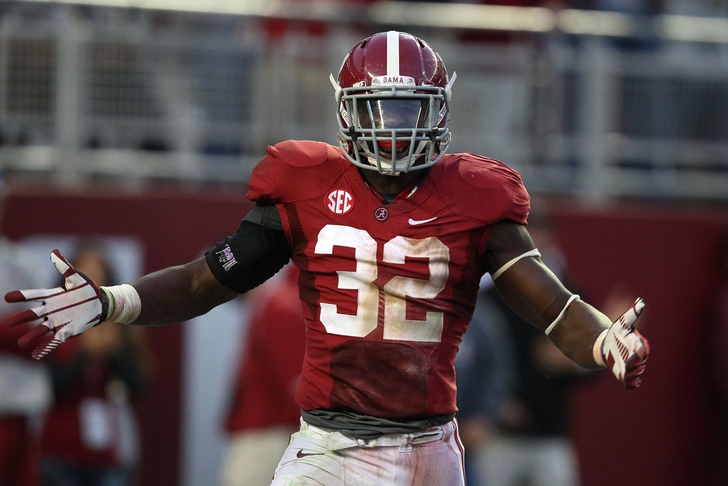 Tom Downey and I split this game due to the amount of NFL Draft Prospects participating, for his recap of the Oklahoma prospects click here.

A game that saw the two-time defending National Champions in the Alabama Crimson Tide fall to Bob Stoops and the Oklahoma Sooners. A back and forth game in the first quarter, then saw the Sooners outscore the Tide 31-21 for the final three quarters. The victory undoubtedly gave a little extra satisfaction to Coach Stoops who beat the SEC's "top dog", a conference he claims overrated. The Oklahoma defensive front used their speed to get through and around the Alabama offensive line, putting the Tide offense in pressure situations often.

For the NFL there was plenty of prospects to keep an eye on in this one.

Mosley is ranked as the top or toward the top of everyone's draft boards at the LB position. CBSsports.com currently has him at first at the LB position and 14th overall. He has had quite the career at Alabama and has been the leader of their defense the last two seasons. A trait that NFL teams have definitely taken into exception.

Mosley shows incredible play recognition and read more than a couple plays, causing the offense to look else where. It was a rare moment when he was not around a play.

A strong leader who acts like the quarterback of the defense. He has been a part of a team with a winning culture for four years.

Strong tackler and never gives up on play, chases down ball carrier even if he had already been beaten on the play.

Showed good coverage skills but was beat on a couple occasions against the faster players.

Mosley is about as high as he can go. A sure-fire first round draft pick and more-than-likely top 15 pick, Mosley can start planning what nice, new car he wants to purchase.

There are plenty of teams that would like to draft a player like Mosley and it will happen sooner rather than later.

Kouandjio unfortunately had more negatives than positives in this game all on national television, with plenty of eye balls on him.

Bad day at the office for Kouandjio!

Looked very impressive on run plays as he generated great push and overpowered the defensive lineman, driving them up the field and creating running lanes for the running back.

Got beat all night around the edge as they dipped their shoulder and got lower than him. None more costly than the final sack he gave up that was a fumble returned for a touchdown.

Needs to learn to use hands to push shoulders down and drive the edge rusher to the ground or get low to stand up the rusher and take him up the field.

This game showed a lot of holes in his game and unless he can show that he has looked at this game and learned from it, he will slide down some draft boards until May.

At 6' 5" 310 pounds the physical side is there and may be enough to look past this dud of a performance, but he needs to show that is all it was, a dud and not something that will be a recurrence.

The man with the oddest name in college football is going to the NFL, where he can try to stake his claim to the same title. He may have a hard time against a few NFL names but his play on the field could help him claim it all to himself.

Comes up from safety position to deliver big hits, did this on a number of opportunities throughout the game on many run plays.

Involved on nearly every tackle, says a lot from the safety position.

Much like Mosley, Clinton-Dix saw the play before it even happened. Very impressive reading the plays from the safety position or up in the box.

Allowed reception in front of him for TD.

Allowed a few catches right in front of him but had good coverage on them, just unable to separate the ball and the player.

Clinton-Dix showed his versatility and athletic ability all night long and will be a welcome addition to any defensive secondary.

Someone like the Cowboys, Eagles, Bengals or 49ers could use a steady addition to the safety position. Especially if the Niners have to let Donte Whitner go to free-agency.

The 2013 Heisman Trophy runner-up is one of the more interesting prospects going into the draft as there are people who both think he is an NFL starter and others who think he is a career backup.

Throws an excellent back shoulder throw. Displayed that on a few passes in the first half.

Stood in pocket well with pressure coming and delivered a nice 40-yard pass that dropped right into the pocket of the wide receiver.

Showed good footwork side stepping a rusher up the middle and scrambling around to extend play before making completion.

Threw into triple coverage for an easy interception. Very uncharacteristic.

Under threw deep ball after what looked like he put all his effort into the throw. Arm-strength has been a question.

Threw second interception from off-balance throw in the face of pressure. First time in a while that McCaron had seen pressure like he did in this game and he did not handle it too well.

McCarron still finished with 378 yards passing but a lot of that came from yards after catch. He struggled in his last two games at the collegiate level and recently turned down his invitation to the Senior Bowl, which would have been an opportunity to help himself.

McCarron is a proven winner who has a remarkable 36-4 record in his time at Alabama. Since there are plenty of NFL teams who don't see McCarron as a starter he will be a second-third round grab but don't be surprised if he goes after that.

Alabama CB Deion Belue is a very athletic corner who is a bit undersized. Currently ranked No. 19 CB heading into the draft Belue has the speed to impress scouts in the NFL and could become a valuable piece in the NFL in the future.

Alabama RB Derrick Henry will be a sophomore next season and had a true coming out party for the Crimson Tide in this bowl game after gaining 161 total yards and two touchdowns on only nine carries. Henry averaged 10.6 yards per carry on the season and will be a name to watch next college season.