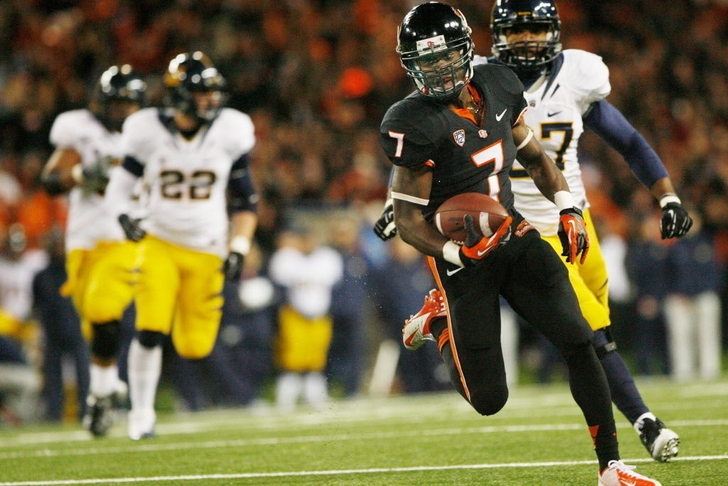 Boise State’s Chris Peterson left to take the head-coaching gig at Washington, while

senior quarterback Joe Southwick was sent home for urinating off a balcony, an accusation the quarterback denied.

Oregon State started the year 6-1, after a stunning loss to Eastern Washington at home. The Beavers then lost their last five games before heading to Hawai’i.

It was Oregon State that came away victorious, thanks to a couple of key Boise turnovers.

There were a few prospects to watch for in this game, with the majority playing for the Beavers.

Crichton is only a junior, but his draft stock is high thanks to a season in which he recorded 7.5 sacks and 19 tackles for loss. The 6-foot-3, 260-pound defensive end had similar numbers last season, putting up nine sacks and 17.5 tackles for loss. He led the Beavers with three forced fumbles.

Crichton dominated Boise’s offensive line early. At one point during the game, Crichton had three straight tackles for loss. On one of those plays, Crichton got past three offensive linemen, two of whom were pulling, to make the tackle. Crichton also had a forced fumble on a sack that resulted in a touchdown for Oregon State.

He showed more than enough speed to be a successful pass rusher at the next level and was able to play both defensive end spots with ease.

Crichton already has an NFL-caliber swim move. He seemed to be at his best when playing in what looked like a wide-nine defense.

Although Crichton was solid in run support when the play went to his side, he struggled when the play went the opposite way. Crichton had a bad habit of drifting towards the middle linebacker spot on runs away from him. That left him out of position for a cutback or reverse. He’ll need to do a better job of keeping containment.

He disappeared at times and did very little aside from that three-play series.

He got an early jump a couple of time on hard counts.

Seemed to rely a little too heavily on his swim move.

Crichton looked dominant at times against Boise. Scouts will like what they see on tape from him.

Crichton flashed first round talent against Boise. He showed that he can do everything asked of an NFL defensive lineman. Crichton is only a junior, and hasn’t decided on his next move. If he goes pro and performs well at his workouts, he could sneak into the late first round. He seems like the perfect fit for a 4-3 defense, and NFL teams always want more guys that can get to the quarterback. Crichton decision will likely depend on what the NFL Draft Advisory Board tells him.

Cooks is the Biletnikoff Award winner, which is given to the nation’s top receiver. The 5-foot-10, 186-pound receiver caught 128 balls for 1,730 yards and 16 touchdowns. He also chipped in 217 yards and two touchdowns on the ground.

Cooks caught eight balls for 60 yards and touchdown in the game. Most of his work came in the first half, as Oregon State was up big for most of the second half.

Cooks showed everything you want from a slot receiver. He has the hands, the route running, the speed, the moves and the versatility. Cooks catches the ball with his hands, not his body. He can stop on a dime and has good acceleration. I loved his juke move.

He showed he can run the ball as well, picking up 29 yards on four carriers.

I didn’t get a chance to see much of his blocking, which will be important at the next level. With his lack of size, he may struggle there.

Cooks showed everything NFL teams want in a slot receiver.

ESPN’s Mark May said Cooks was a first-round pick, but I disagree. Sub six-foot wide receivers don’t go in the first round often. Cooks has a chance to be the exception to that rule, but he’ll need to perform well in the combine measurements. Cooks will need to be at least 5-foot-10 and run a fast 40 time. If Cooks blows up the combine, he has a chance to be a first rounder. If he struggles, he could fall to the fourth or fifth round. For now, Cooks is a Day 2 prospect, with a bright NFL future. I expect the junior wide receiver to turn pro, as I don’t think there is much he can do to improve his stock.

Reynolds was the top cover corner for the Beavers all year. He tied for the team led in interceptions with six. The 5-foot-11, 187-pound cornerbacks also had 10 passes deflected, four broken up and 61 total tackles.

Reynolds was in the right place at the right time twice against Boise, as he had two fumble recoveries for touchdowns. He had 10 tackles during the game, and eight of those were solo. He showed he isn’t afraid of tackling, which will be key at the next level. Reynolds had a nice pass breakup as well.

Reynolds has good size for a corner, but he didn’t look that fast. His 40-time could be key for his draft status.

I didn’t see Reynolds covering Boise WR Matt Miller often. I think Boise wanted that by design, but I would have liked to see Reynolds match up against a fellow future NFL player.

Reynolds gets this almost by default. Two defensive touchdowns in one game is impressive. The key to both those plays was Reynolds’ effort. He was in the right place at the right time because he showed good pursuit.

Reynolds should get drafted, but I don’t see him going before Round 4. I like the way Reynolds plays, but I just don’t see the needed physical skills to be a high draft pick. Reynolds will need to contribute on special teams to stick in the NFL.

Leno has been the left tackle for the Broncos since his junior year. The 6-foot-4, 295-pound offensive tackle was the starting right tackle during his sophomore year.

Leno didn’t look overwhelmed by having to block Crichton. He has solid size and looked good when run blocking.

Leno struggled against the other Oregon State pass rushers. He gave up two sacks. He wasn’t matched up against Crichton that often, and although Crichton never beat Leno, Crichton was clearly the superior player in speed and strength.

Leno looks like his moves his feet too slowly. He struggled with swim moves.

I didn’t like what I saw out of Leno. He didn’t look like an NFL-caliber player. He still has a chance to rebound at the East-West Shrine Game.

Leno can’t play left tackle in the NFL. He’s not quick enough and will get destroyed by NFL pass rushers. He still has a chance to get drafted, but needs to show he is better than he played against Oregon State.