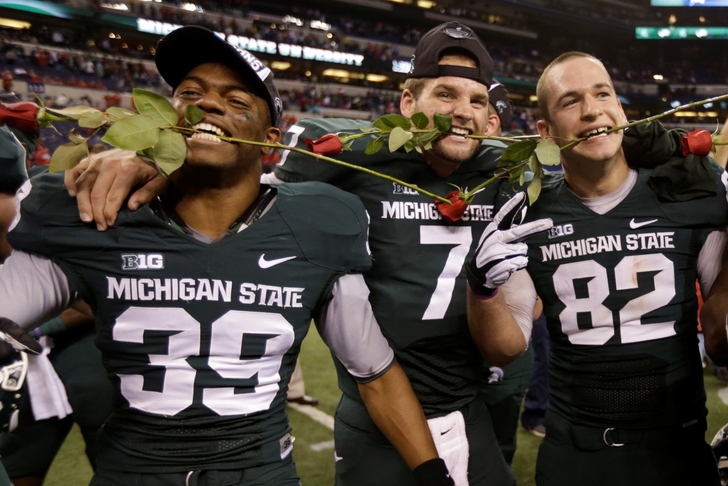 A knock-em down, drag-em out contest between two old school style football teams in the Stanford Cardinal and Michigan State Spartans. The Spartans outlasted the Cardinal in spectacular fashion beating them 24-20 and ending the game on an impressive fourth and one stop by former walk-on LB Kyle Elsworth and company.

The Rose Bowl game, as usual, had lots of NFL prospects participating.

Murphy has had a stellar senior season recording 15 sacks and 23.5 tackles for loss through 14 games. At 6' 6" 261 lbs. Murphy has the size that is coming with the new look 3-4 defensive ends.

Uses hands to throw defender aside and get into backfield on a tackle for loss. Finds ways to get into the backfield nearly every play.

Great swim move after faking upfield and throwing defender aside with left hand for QB hurry.

Lines up in both three-point stance and upright position. Very versatile and athletic defensive end who could make an impact almost instantly on the defensive line.

Made athletic play to bring in a reception on a botched field goal play.

Got called for holding in end-zone as he was struggling in coverage from goal-line set. Murphy was assigned to cover a tight-end and was caught grabbing his jersey in the end-zone after getting beat on an out route to the corner.

Could use his height and length to get his hands up more often to knock down passes.

Murphy showed a little bit of everything that he does in this game. He finished with one sack, two tackles for loss and four total tackles.

Currently ranked as the No. 1 DE in this years class and No. 31 overall, Murphy should be a safe bet to go in the first round.

Dannard is at the top of everyone's NFL draft board at the CB position and rightfully so as he has shown that he can be a shutdown corner all season long.

to make tackle on man.

Came up in box and blitz from edge to tackle running back for loss.

Ball rarely went to his side, showing that the coverage was too good to have the ball thrown his way.

It was hard to find anything negative about this performance as he was not challenged in the passing game.

Can't get much higher than Dennard currently is and he should be the first corner back selected in the draft and could even be a top-ten pick.

Lions, Vikings, Raiders, Falcons all could use help at the corner back position if they decide to go that route then Dennard will be the guy selected.

Yankey is a part of what is arguably the best offensive line in college football. He is thought of as the top offensive guard coming into the NFL draft.

Nice footwork on a pull assignment and absolutely blew up the second-level defender. Showed the athletic ability to square up his feet and deliver block on the move.

Leans forward sometimes a bit too far, allowing the defenders to use his momentum to bring him down and get by.

Saw his head dip a couple times causing him to lose his assignment.

Yankey delivered some vicious blocks on the end of pulls and blew up second level defenders all afternoon. The athleticism for such a big guy has got to have NFL scouts drooling at the potential of this kid.

Since he is a guard, the demand isn't as high which could see him slip out of the first round and into the second.

Skov plugged up the middle of the Cardinal defense all season long and finished the year with a total of 109 tackles with 5.5 sacks and 13 tackles for loss.

Followed play that went different directions a couple times and made a tackle for loss.

Excellent timing on blitzes, blew through an O-lineman and then RB and was still able

to chase down QB and force a throw away.

Over pursued a couple plays and was easily side stepped for a missed tackle.

Skov played an overall great game and was all over the field. Always put himself in position to make a play and worked in the backfield often.

He is a fierce competitor and has 189 tackles over the last two season. Being a fifth year senior Skov has plenty of football intelligence already.

Gaffney was a touchdown machine this season and finished with 22 total touchdowns. He is a workhorse like back who is capable of handling every down duties.

Absorbed contact, bounced off and ran in to the end-zone for first TD. Met the LB in the middle and was able to take the contact and spin off while moving forward, very impressive balance and power.

Doesn't have a lot of speed and will need to find a way to overcome that at the next level. Kind of reminds me of Stephan Taylor from Stanford last season who struggled to find any playing with the Arizona Cardinals.

We have seen plenty of Gaffney this season and already have a pretty good gauge on his potential and abilities.

This projection is based on nfldraftscout.com. I wouldn't be surprised to see him go at some point in the fourth round either.

Stanford DE Josh Mauro played through every play, double-teamed, away from him, whatever, he worked hard until the end each and every play. Mauro is currently projected to get drafted in the third to fourth round range.

Michigan State LB Denicos Allen led the team in tackles this season and had a very impressive Rose Bowl performance. Allen assisted on a forced fumble against QB Hogan. Great job fighting through block and making big plays in the offensive backfield. Allen is currently projected to get drafted in the fifth round.

Michigan State S Isiah Lewis showed speed flying up from the safety spot to make plays in the run game. He also lined up both in the box and safety position. Lewis is currently projected to be drafted in the fifth round.