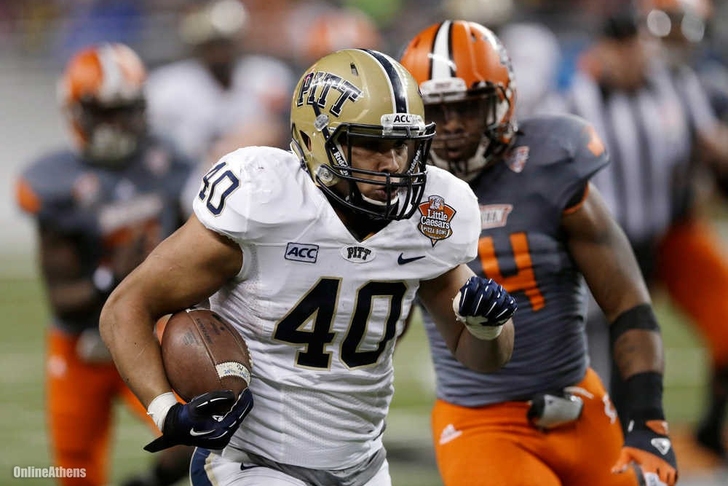 There were a few notable NFL Draft Prospects on display in the Little Caesar’s Pizza Bowl, but the game belonged to a pair of freshman. Running back James Conner and wide receiver Tyler Boyd combined for 471 all-purpose yards as they led Pittsburgh past Bowling Green, 30-27.

Donald had a monster year for the Panthers, recording 26.5 tackles for loss and 10 sacks on the season. The 6-foot, 286-pound defensive tackle and ACC Defensive Player of the Year picked up several post-season awards, as he won the Bednarik Award, Lombardi Award, Nagurski Trophy and Outland Trophy.

On the few plays Donald was blocked one-on-one, he looked dominant. He bull-rushed the left guard on one of the first plays of the game, and nearly recorded a sack. He had a nice swat in the middle of the game on a pass attempt. He made a pair of one-armed tackles on run plays. He also picked up two tackles for loss.

BG tried to run away from Donald as much as they could, a testament to his abilities.

He had a huge hit on Bowling Green’s last-ditch hook and ladder play.

Donald struggled against double-teams all night and his frustration was visible. He had a stupid personal foul penalty after Pittsburgh stopped Bowling Green on third down. BG would later score on that drive. Donald will need to control his frustration at the next level. Making plays against double-teams is never easy, but I would liked to have seen Donald make at least one play.

Donald had a chance to make a play on a read-option, but tackled the quarterback instead of the running back.

I didn’t see a whole lot from Donald to make me think he was anything more than a Day 2 pick. He showed flashes when he wasn’t being double-teamed, but I expected more. He has a chance to rebound at the Senior Bowl.

There is a chance for Donald to sneak into the late first round, but he looks like a second round pick to me. He is undersized, and will likely have small arms when he checks-in at the Combine. That will hurt him.

He is a perfect fit as a 3-technique, and would fit well in a Cover-2 defense. I think Donald will be a productive pro, despite his lack of size, but I need to see more from him to consider him worthy of a first round pick.

Gates was the best player on Bowling Green’s roster this year. The 5-foot-11, 219-pound safety played the “Rover” position for the Falcons, which means he is a safety/linebacker hybrid. Gates did a little bit of everything for BG, recording 71 tackles, 4.5 tackles for loss, two interceptions, three pass breakups, five passes defended, three fumbles recoveries and two forced fumbles. Gates even spent time as a kick returner.

Gates looked like a solid tackler, and spent most of the time in the box. He wasn’t afraid of contact and showed some ability as a blitzer, recording half a sack. Gates recorded eight tackles, second most among Falcon players.

He showed some ability as a kick returner, taking a return back for a touchdown.

He hits hard and takes the correct angles in pursuit.

BooBoo Gates is one of the best names in college football.

I never got a chance to see him much in coverage, as BG kept him in the box to try and stop the run. Like most of the Falcons’ defense, Gates struggled to stop Conner. Gates missed a few tackles, when he failed to properly wrap up Conner.

He has solid, but not spectacular speed.

He also failed to steal any picnic baskets.

I liked what I saw out of Gates. I haven’t seen enough of his coverage ability yet, but he has potential as an in-the-box safety.

Gates is worth a draft pick, but he’s a little short and I question his pass coverage abilities. He does offer value as a tackler. He can do a lot on special teams, which is huge at the next level.

Savage has had a tumultuous college career. He started at Rutgers, where he took over the starting role as a freshman. He struggled his sophomore year and transferred to Arizona. He left Arizona without ever playing, after Arizona hired Rich Rodriguez. He ended up at Pittsburgh for his final year, where the 6-foot-5, 230-pound quarterback completed 61.2 percent of his passes for 21 touchdowns and 2,958 yards. He threw nine interceptions.

I saw an NFL arm. Savage has a cannon, which allows him to be more aggressive than other quarterbacks. It looks to me like he can make every NFL throw. Savage stood tall and strong in the pocket., completing 8-13 passes for 124 yards.

He isn’t a running quarterback, but is mobile enough and is tough to bring down.

His accuracy wasn’t always there. He got away with a couple of questionable decisions and took two sacks.

He missed the second half because of a rib injury.

It’s a shame Savage could only play half the game, but he flashed NFL ability when he was playing.

I don’t think Savage is worth a draft pick, but he is an intriguing UFA. He’s never shown consistency for an entire season, but has upside as a project.

Street missed the bowl game with an ankle injury. The 6-foot-4, 195-pound senior wide receiver will likely be a late Day 2 or early Day 3 draft pick.