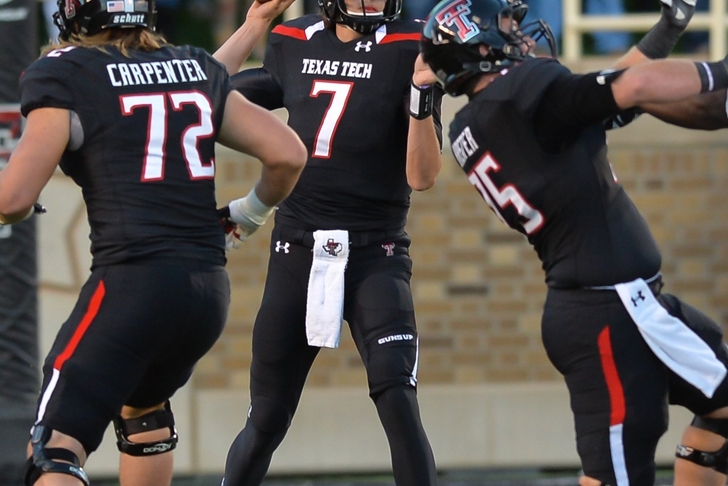 The No. 14 Arizona State Sun Devils took on the unranked Texas Tech Red Raiders in the National University Holiday Bowl. A game that was dominated mostly by the Red Raiders who came away with a 37-23 victory over the Sun Devils. The first half was all Texas Tech who had just under 400 yards before halftime and led the game 27-13. The Sun Devils scored on their opening drive in the second half to make it a one possession game, but on the ensuing kickoff gave up a 90-yard return for a TD and there was no looking back from there.

There were a couple big name NFL Draft prospects in this game who can surely make an impact on future Sundays.

Kept finding open spots in the zone and showed strength finishing each reception by driving through defenders.

Made receptions with cornerback on his back. Uses body well to hold off cornerbacks to bring in catch.

Lined up in slot often and out wide on occasion

Wasn't asked to block a lot, but when he was asked to he showed poor technique or was late getting to the block on screen plays.

Showed what every scout already knew about him and then some. Great hands, good strength and uses body well.

Amaro is already thought of as one of the top tight-ends in this class and why not after setting the receiving yards record.

I was really looking forward to watching him in this game as he was one of my favorites to watch the last two years. Sutton is currently looking at a high draft pick in the upcoming NFL draft. Sutton's numbers are down this year from his ridiculous junior season. Sutton put on 38 pounds

from his junior to senior season, and honestly, it doesn't look like muscle.

Slid up the line and detached from blocker to make tackle on run play.

Knocked down hands and threw offensive lineman to the side to make tackle for loss on RB.

He looked sluggish, I think for his sake he needs to trim down some of that weight that he put on to help his cause.

Quit on two plays when defense jumped offsides as play went on, no rush which turned into big gain.

Took a while to join the party, didn't seem like he made a single play in the first half.

Sutton needs to begin showing that his deflated numbers are a fallacy and he didn't do a great job of doing that tonight. Although he did make plays, it was the ones that he didn't make plays on that stuck out. Those were overwhelmingly bad.

He will probably still get an early pick but these projections could slip a bit if he appears out of shape during his pre-draft workouts.

Arizona State OLB/DE Carl Bradford is a draft eligible junior who has not made his decision on turning pro yet. He asked to receive NFL evaluation and is waiting on that to return before he decides. Bradford had a solid season amassing 18 tackles for loss and 8.5 sacks before the bowl game. He played stellar tonight and was constantly in the face of the QB, resulting in either a sack or a QB hurry. He also made a few tackles for loss on the opposing running backs.

Texas Tech WR Eric Ward had over 250 receptions as a starter in his college career and over 80 in each of the last three seasons. Ward showed speed tonight on an end-around and strength as he refused to go down after a reception, running through a number of defensive backs.