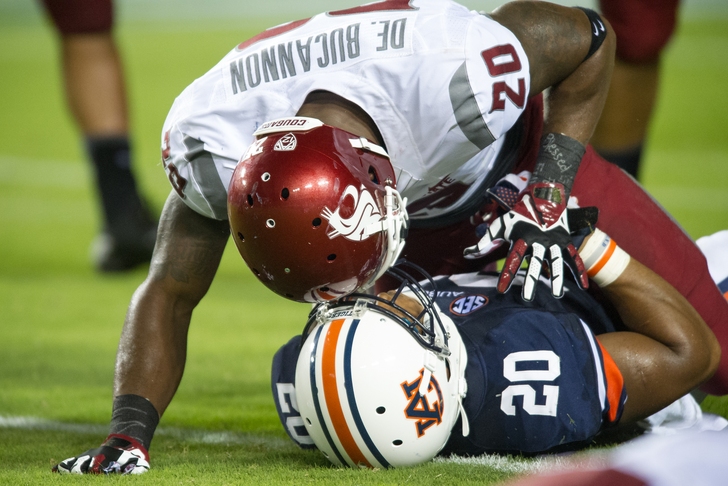 It’s the most wonderful time of the year: Bowl season!

While the Gildan New Mexico Bowl wasn’t expected to be the marquee matchup of Saturday’s bowl games, it turned out to be a great start to bowl season. Colorado State mounted an incredible comeback to knock off Washington State. The Cougars coughed up the ball three times (one was overturned) in final three minutes, and lost 48-45.

Although Washington State and Colorado State aren’t hotbeds for NFL prospects, there were a few players worth watching.

Bucannon isn’t a household name, despite being named an AP First-team All-American. The 6-foot-1, 215-pound strong safety led the PAC-12 in tackles with 109 tackles and was fourth in the conference with five interceptions this season. He also had three forced fumbles and three fumble recoveries. Bucannon had 14 career interceptions.

Bucannon lived up to his reputation as a playmaker when he baited Colorado State quarterback Garrett Grayson into a pick. Bucannon read the eyes of the QB well on the play.

Bucannon had five tackles on the day, four of them solo. He didn’t look like he was afraid of contact, and displayed solid form in tackling.

Bucannon had a huge missed tackle that resulted in a long Colorado State TD. He did a great job getting into position, but failed to wrap up.

Aside from the interception and a big hit early in the game, Bucannon was quiet, as Colorado State preferred to stay away from him.

Bucannon didn’t look like Ronnie Lott, but he was solid nonetheless. Scouts will love his interception when they look at it on tape. His missed tackle on the TD run was an aberration, as he is normally a very solid tackler. He has a chance to improve his stock even more in the Senior Bowl.

Depending on how he does in interviews and workouts, Bucannon has an outside chance of going as high as the second round. Teams are always looking for defensive backs, especially those that make plays. He has good size and his ability and willingness to tackle will be appealing to teams looking for special teams help. In a down year for safeties, Bucannon could be one of the first ones off the board. At this point, I’d expect Bucannon to go in Round 3 and no later than Round 4.

Few are familiar with Richburg, but he is one of the best center prospects for the 2014 NFL Draft. The 6-foot-4, 300-pound center has started since he was a redshirt freshman and hasn’t missed a game. He had an impressive 45 knockdown blocks this year.

The first thing that jumped out to me when watching Richburg was that it looked like he was calling out the offensive line adjustments. He was pointing out who was blitzing and helping to make the adjustments. That is a huge plus in the eyes of NFL personnel.

Richburg was strong at the point of attack, and always seemed to be stronger than the man he was matched up against.

I only saw one missed block from Richburg in the whole game, but it nearly cost Colorado State dearly.

Richburg (70) lets his man get past him on the play above, and may have gotten away with a holding call. However, even though he got beat, he sealed off the correct side and prevented an easy tackle for loss.

I was really impressed with Richburg’s play and I’m sure NFL scouts were as well.

Unless Richburg struggles against better competition in the Senior Bowl, I don’t see him falling out of the third round. Not only is he one of the best centers in the draft this year, Richburg played some guard in college, meaning he can offer teams versatility. Centers, especially ones from non-power conference schools, don’t usually get drafted very high. However, Richburg could be the exception to the rule. He could go as high as the late second round, and shouldn’t go lower than early round four.

Barrett had a huge year for Colorado State this season, taking home Mountain West Defensive Player of the Year honors after recording 12 sacks, three blocked kicks and a Mountain West-record 20.5 tackles for loss. The 6-foot-2, 250-pound linebacker transferred from Nebraska-Omaha after the school disbanded its football program.

Barrett made the highlight reels from the game thanks to two huge forced fumbles in the final three minutes of the game. Although the first one was overturned, he forced another one of the very next play. Barrett came up big in the clutch and kept Colorado State in the game.

Aside from the two tackles late, Barrett recorded just four tackles and just one quarterback hurry in the game. He was non-existent until the last three minutes.

He got burnt badly in pass coverage, giving up a 28-yard TD to Washington State’s Theron West. He looked stiff in coverage on that play and I don’t think he’ll be able to cover NFL backs.

Despite a lackluster showing early, Barrett came up big when it mattered. There wasn’t much hype surrounding Barrett’s draft prospects entering the game, but he did enough to make sure scouts pay attention to when he plays in the East-West Shrine Game.

Barrett needs to perform well in his workouts, interviews and at the East-West game to be drafted. He put up in good numbers at Colorado State, but I don’t see that translating to the NFL. He can’t play LB in the NFL because he struggles in coverage. He’s too small to be an every-down 4-3 DE, so he is likely limited to a pass-rushing specialist role. His ability to help out on special teams will be huge for his career. Barrett shouldn’t go before the end of Round 6, but he will at least get the chance to stick on a team’s squad as an undrafted free agent.