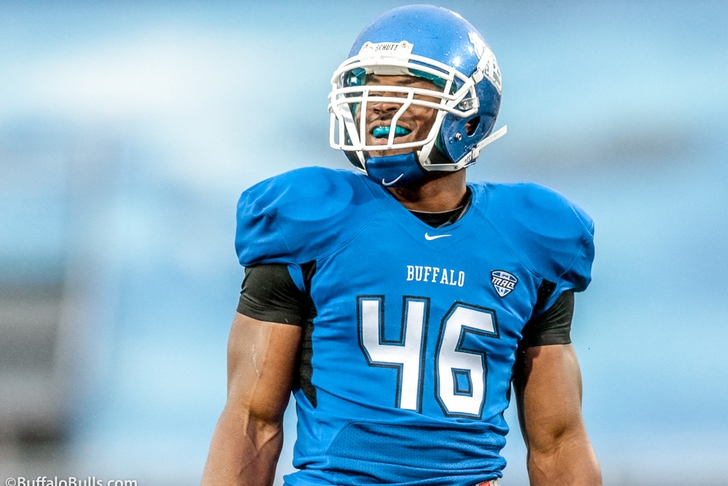 The second of two lopsided bowl games, the Famous Idaho Potato Bowl was a blowout. The Buffalo Bulls never led in the game, and were down 42-10 at the start of the fourth quarter.

I consider Mack the best player that casual fans have never heard of. Mack wasn’t recruited by any FBS school coming out of high school in Florida except for Buffalo. The 6-foot-3, 248-pound linebacker made the best of his opportunity, and is the NCAA record holder for forced fumbles and co-recorder holder in tackles for loss.

Mack didn’t have the massive game I expected him to, but San Diego State did everything it could to limit Mack, who faced double teams for much of the game. While Mack recorded only six tackles, he made his presence know. He recovered a fumble on a sack and flashed some coverage skills by swatting down a pass.

Mack never jumped off the screen, like he did against Ohio State earlier this year. He got a lot of attention from San Diego State, but I would have liked to seen him make a big play or two.

I’ve seen Mack play in person before, when he had three sacks and three forced fumbles against Miami University - in the first half. After that game, Miami interim head coach Mike Bath said Mack was more impressive on film than A.J. Hawk and Bobby Carpenter (both of whom Bath played against as a college QB) and Mack proved that in the game.

I fully expect Mack to be a top-10 pick in the upcoming draft. He has an offer to play in the Senior Bowl, but hasn’t accepted yet. He’s a sure-fire bet to go to the Combine. If he impresses teams at those events, he could garner top-5 consideration.

Mack’s best fit will probably be as a 3-4 OLB, but he might be able to play as a 4-3 DE or 4-3 OLB. His best ability is his pass rushing, and NFL teams are always in need of players who can get to the QB. He reminds me a lot of Broncos LB Von Miller.

Muema is only a redshirt junior, but has sent paperwork to the NFL Draft Advisory Board and is expected to turn pro early.

The 5-foot-10, 205-pound running back ran for over a 1,000 yards in two straight seasons, despite an ankle injury at the start of this season.

Muema had an incredible day on the ground against Buffalo, picking up 229 yards and three touchdowns on 28 carries. He averaged an absurd 8.2 yards per carry.

He looked decisive when making cuts and wasn’t afraid to go right up the middle. He showed enough elusiveness to make the first guy miss. Muema always seemed to pick the right hole and was patient.

Muema didn’t seem to have top-end, breakaway speed. He can out-run the Buffalo Bulls, but he can’t out-run the Buffalo Bills. Like the majority of young running backs, Muema could use some work on his pass protection. His lower body is thin, which means he might have trouble keeping his legs moving at the next level.

You don’t rush for 229 yards and not get a stock up. Muema didn’t impress me, he shocked me with his effort.

This type of performance in a bowl game can bump a player from a priority free agent to late round pick. I don’t see Muema being anything more than a Round 5-7 pick, assuming he turns pro. I don’t see him being able to improve his stock that much with another year at San Diego State, and running backs have very short shelf lives, so I think turning pro isn’t a terrible choice. Excluding the best of the best, running backs in today’s NFL are a dime a dozen. I think his best fit is in a one-cut zone system, much like the Houston Texas run. If Muema gets a fair shot, he could be a serviceable back.

Mack was clearly the best player on Buffalo’s roster, but Oliver is no slouch himself. The 5-foot-8, 208-pound running back had 1,535 yards and 15 touchdowns on the season. The Bulls offense ran through Oliver.

Oliver picked up 114 yards on 28 carries and caught a touchdown pass. He’s got a thick lower body, and is built like Maurice Jones-Drew. He is tough to bring down and has solid quickness. He averaged a respectable 4.1 yards per carry.

Oliver didn’t show the needed the speed, moves or quickness to be a full-time starting back in the NFL.

Oliver didn’t look good early, and only showed up once the game was out of reach. He never showed the big play ability that young running backs like Giovani Bernard possess.

Oliver has a chance to get drafted, and will at least get a look in training camp. He has battled knee injuries throughout his career, a major red flag for NFL teams. He does have good vision, but lacks that something special. I don’t see him being anything more than a No. 3 RB, but don’t be surprised if he hangs around on a roster for several years.