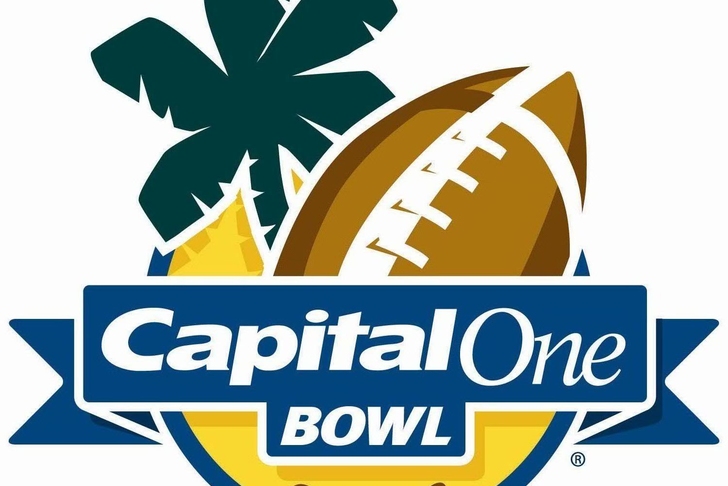 There were several NFL Draft prospects on display in the Capital One Bowl, but the game belonged to South Carolina quarterback Connor Shaw. Shaw, who isn’t anything more than a fringe NFL prospect, threw 312 yards and three touchdowns, ran for 47 yards and a score and caught a nine-yard TD pass. South Carolina defeated Wisconsin 34-24.

Everyone knows about Clowney. The 6-foot-6, 274-pound defensive end does things like decapitating running backs.

Clowney faced double-teams for much of the day, but was still a force to be reckoned with during the game. Wisconsin tried to run away from him as often as it could. He had two key swats late in the game. Cut blocks were ineffective against him, as he just jumped over the offensive lineman. He had a big tackle for loss on a third down run. He forced an errant throw on the goal line by beating two blockers. Not only is he fast, but he has a great bull rush. Clowney has a few freak plays per game that don’t show up in the stat line.

Clowney gave up a touchdown pass when trying to cover. He really should never be in pass coverage. There were times when Clowney looked gassed.

Scouts know what they are getting with Clowney by now. This game won’t change that.

Clowney’s exact draft spot will likely be determined by how many quarterbacks go in the first few picks. Clowney should be drafted between the second and eighth picks. Don’t be surprised if a team trades up to get him. Clowney is s natural fit as a 4-3 defensive end. I don’t think he should be a 3-4 outside linebacker: He’s just not a fit in that defense. Clowney has a chance to be one of the best defensive ends in NFL history.

Quarles was one of the biggest beneficiaries of playing alongside Clowney. The 6-foot-4, 298-pound defensive tackle recorded 39 tackles, 13.5 tackles for loss and 9.5 sacks en route to an All-SEC first-team selection.

Not much. Wisconsin limited to Quarles to just three assisted tackles.

Quarles had an offside penalty, despite playing defensive tackle. He is right next to the ball and there is no reason he should ever jump offside. He never made a big play, despite getting plenty of one-on-one matchups.

I was not impressed by Quarles’ performance.

Although Quarles struggled, you never judge a player based on one game. Quarles’ body of work is still indicative of a Day 2 pick. That could change, but this is a player who Steve Spurrier said reminds him of Warren Sapp. Quarles has already decided to turn pro early and is a good fit as a 4-3 defensive tackle or a 3-4 defensive end.

Hampton has been a full-time starter since the beginning of his sophomore year. The 5-foot-10, 202-pound corner recorded 51 tackles, three picks and nine pass breakups this year.

Hampton was solid in run support, recording six tackles. All of them were solo and one was a tackle for loss. Hampton was good enough in pass coverage, although he didn’t get a chance to show much against a Wisconsin team that prefers the ground-and-pound.

Hampton was flagged for pass interference when covering Jared Abbrederis. He was beat on slant route, but a poor pass resulted in an incomplete pass. His form isn’t great, and could use some polishing.

Hampton didn’t see enough action through the air to really affect his stock much.

Hampton isn’t as talented as former Gamecock corner Stephon Gilmore, but should be a Day 2 pick. Hampton has potential, but needs some work before being ready to cover the NFL’s best.

Ellington was Shaw’s favorite target, catching six passes for 140 yards and two touchdowns. Ellington showed he was great at adjusting to poorly thrown balls. He bailed out Shaw a couple of times. Ellington showed great hand-eye coordination, especially on a critical fourth down catch.

He also threw a touchdown pass.

Ellington is small and struggled slightly at getting off the line. He doesn’t have breakaway speed.

Because of his size, Ellington will likely be limited to a slot receiver role at the next level. He doesn’t have Tavon Austin speed, but his ability to contort his body and make catches will wow scouts. He should become a reliable safety valve target at the next level.

Abbrederis went to Wisconsin as a walk-on quarterback. He’ll leave as a two-time first-team All-Big Ten wide receiver. The 6-foot-2, 190-pound Abbrederis led the Badgers with 1,081 yards and seven touchdowns on 78 catches. He also had six carries for 119 yards and two touchdowns.

Abbrederis does a good job of sitting down in a zone. He has solid hands and runs great routes. He does a solid job of protecting the ball. He served as the punt returner as well.

Abbrederis caught five balls, but only for 30 yards. Wisconsin’s pass offense was terrible, especially when starter Joel Stave was injured, but Abbrederis didn’t offer much in terms of yards after catch. He doesn’t seem to have great speed either.

Abbrederis didn’t put up big numbers, but that won’t hurt his stock. Has a chance to improve it at the Senior Bowl.

Abbrederis is a classic possession receiver. He doesn’t have great speed, but makes up for it with savvy and route-running. He won’t be a play-making No. 1 WR, but will be a reliable No. 2 or No. 3.

Borland was a three-year starter for Wisconsin and was a first-team All-Big Ten selection each year. The 5-foot-11, 246-pound linebacker racked up 111 tackles, 8.5 tackles for loss, four sacks, a forced fumble and two fumble recoveries this year.

Borland was all over the field against South Carolina. He had nine tackles during the game and eight of those were solo. He had a huge forced fumble late in the fourth quarter, although he inexplicably wasn’t credited for it. Borland is solid in run support and always around the ball. He is a good tackler and can blitz as well. Borland looked like he was the defensive play caller.

Borland had one or two missed tackles where he failed to properly wrap up. I don’t think he got deep enough when playing zone. He could struggle to cover tight ends and running backs because of a lack of size and speed.

Borland had a classic Borland-like game. He did a lot of things well, but his lack of size and speed is going to hurt him.

Borland lacks the size and speed NFL teams want in their MLB. However, he will be a mid-round draft pick because he makes plays and does the little things well.

White has never been a true feature back at Wisconsin, splitting time with Montee Ball and Melvin Gordon. The 5-foot-10, 195-pound running back had his best statistical season this year, recording 1,484 yards and 13 touchdowns on 221 carries. He also had 300 yards and two touchdowns on 39 catches.

White showed good vision and solid burst when running. He is a very good pass blocker for a college running back and displayed solid hands. He picked up 107 yards on the ground on just 12 carries.

White is the second option to Gordon. He has good, but not great, speed and strength.

White played well, but it won’t be enough to drastically increase his stock.

I’ve mentioned this before, but in today’s NFL, most running backs are a dime a dozen. Unless they offer unique, game-breaking ability, the difference between a Round 3 prospect and Round 6 prospect isn’t that large. White falls into that category. He isn’t a game-breaker, and is a little undersized. He’ll be a solid NFL player, but nothing special.

Pedersen was an All-Big Ten honorable mention this year. The 6-foot-5, 240-pound tight end spent much of time blocking for Wisconsin’s power-running game, but did record 551 yards and three touchdowns on 39 catches.

Pedersen had the task of helping to block Clowney. He held up surprisingly well. He had a great catch and run that resulted in a near touchdown. He finished with three catches for 50 yards. Pedersen also got open in the red zone, but a poor throw resulted in an interception.

Pedersen held up when helping with Clowney, but can’t block pass rushers on his own. He isn’t a vertical threat; he’s more of an intermediate one.

Pedersen did a lot for Wisconsin that won’t show up on the stat sheet, but it will on tape.

I don’t think Pedersen will ever be a No. 1 TE, but he can be a useful backup. He doesn’t have the great receiving skills teams are looking for now, but he can fill a role at the next level.

Groy was a first-team All-Big Ten selection this season. The 6-foot-5, 320-pound offensive guard has been a full-time starter for two years.

Groy had a couple of nice seals to spring Wisconsin’s running backs. When he was matched up against Quarles, he outplayed him.

Groy looks a little slow in pass protection. He’s clearly at his best when run blocking.

Groy played well, but his stock should remain steady.