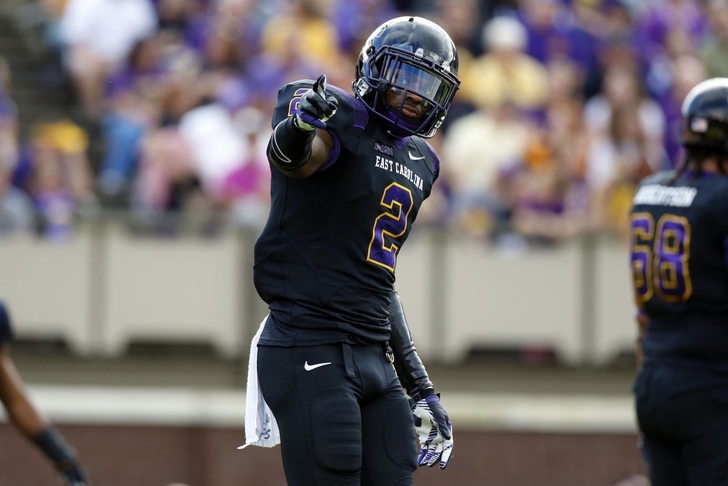 So far this year, the bowl games have been dominated by impressive performances from running backs. The Beef ‘O’ Brady’s Bowl was no different, as East Carolina rode Vintavious Cooper to a 37-20 comeback victory over Ohio University.

Cooper had a solid season for the Pirates, rushing for 1,193 yards and picking up 13 touchdowns. He was the Pirates third-leading receiver. The 5-foot-9, 200-pound running back is a former junior college transfer who benefited from a good offensive line and a talented quarterback.

Cooper showed solid vision and patience en route to 198 yards and two touchdowns on 25 carries. He had an absurd 7.9 yards per carry and busted several long runs. He looked decisive when hitting holes and proved he has the hands to offer NFL teams something as a pass catcher.

Cooper busted a few long runs, but got caught from behind. He lacks the speed to make it as a full-time NFL back. Although he has a sturdy build, he didn’t show much ability to break tackles. Cooper had a nice day on the ground, but Ohio isn’t good at stopping the run, so take his performance with a grain of salt.

Cooper put up a solid performance against Ohio, which will help him in the eyes of scouts.

Cooper suffers from what plagues many college running backs; a lack of speed. Cooper does a lot of things well, but doesn’t do enough of them great. He will need to prove to teams that he can contribute on special teams to make a roster. Cooper also has a red flag on his record, stemming from a suspension for marijuana possession.

Tettleton was a three-year starter at Ohio, despite being lightly recruited out of high school. The 6-foot, 207-pound quarterback threw for 2,851 yards, 21 touchdowns and 12 interceptions. It was his worst statistical season during his time at Ohio. His completion percentage dropped every year.

Tettleton has more than enough mobility, although he prefers to throw. He tends to make good decisions, and will throw the ball away when appropriate.

Tettleton’s stat line from the bowl game: 21-40, 228 yards, 1 TD, 3 INTs - that won’t cut it in college, let along the NFL. His first interception was the result of a lack of arm strength, accuracy and poor decision-making.

Tettleton had a chance to prove his doubters wrong with a good performance and he failed to do so. He barely completed twenty percent of his passes. Two of his picks came in the fourth quarter, hurting his team’s comeback attempt.

Tettleton doesn’t have the traits needed to be an NFL QB. He’s undersized, which is a huge problem for quarterbacks. Drew Brees and Russell Wilson are the exceptions to the undersized QB rule. Both of those players have everything an NFL QB needs, while Tettleton does not.