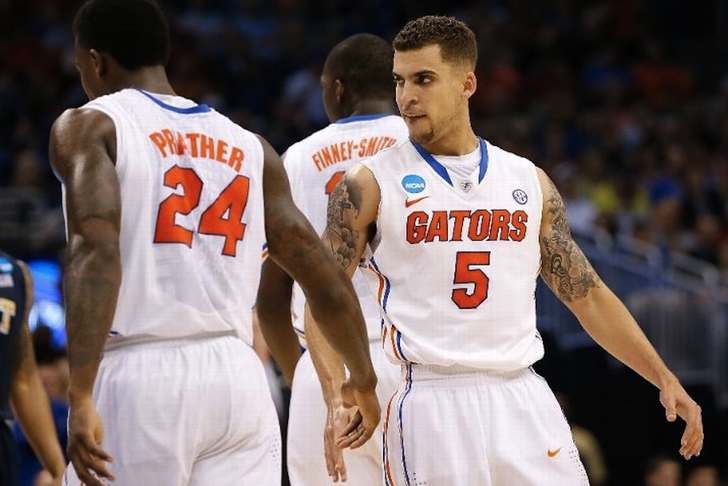 The first two rounds of the NCAA Tournament left us with an abundance of great moments and upsets, but there are no fluke teams left.

Everyone is playing to leave the weekend with a ticket to JerryWorld and the Final Four, making the games that much more intense.

Speaking of upsets, who had these guys in a Sweet 16 matchup?

If you raised your hand, you're a liar.

Stanford pulled a first-round upset over New Mexico, and then did what some thought the Lobos would do by upsetting #2-seed Kansas. Dayton upset in-state rival Ohio State in one of the tournament's most exciting games, and followed that up by narrowing defeated Syracuse.

This matchup is a battle of different styles. The Cardinal are a big team and focus on getting the ball to the post, while the Flyers have a roster full of athletic wing players who like to push the tempo.

Whoever can control that tempo will win this game. Stanford point guard Chasson Randle (18.7 ppg) has been lights out for the Cardinal when he's on the floor - introducing himself nicely to Andrew Wiggins, who said he didn't know who Stanford's leading scorer was, last weekend - and his ability to match Dayton's guard production will be key.

Dayton is hoping to continue their hot-shooting (37.8% from long range on the season), which could neutralize Stanford's advantage in the post and on the boards.

Prediction: No matter who wins this game, we're going to have a double-digit seed a game away from the Final Four, and I think Dayton will be that team. Stanford showed a lot of fight and determination in their win over Kansas, but they did struggle with turnovers (usual starting point guard Aaron Bright is out for the season) and defending the perimeter where their bigs aren't effective. Dayton usually goes 10 or 11 deep, keeping their athletes fresh. It'll be close, but the Flyers' perimeter play gives them a shot at the Final Four.

Florida got here by beating a pesky Albany team and then trouncing Pitt, while UCLA easily discarded both Tulsa and Stephen F. Austin.

The Gators' seniors have been unstoppable all season with someone different stepping up seemingly every night, and their defense has been stifling. They can play man and a variety of zones to try and confuse the opponent's offense. Their offense does get stagnate at times, which they can't afford in this matchup.

On the other hand, UCLA is an offensive-oriented team. They love to get out in transition and get easy buckets, but execute well in the half-court, too. The Bruins will play a zone at time on defense, and we're likely to see more of it in this matchup since Florida is not a great outside shooting team.

Prediction: Florida. We all know how good the Gators are - 28 wins in a row, the top seed in the tournament - but the Bruins will give them a good test and matchup well with Florida. In the end, the Gators are just too good and will pull it out in the last few minutes.

Wisconsin made it to the Sweet 16 by blowing the doors off American and then pulling off a second-half comeback to avoid getting upset by Oregon. Baylor started their tournament off with a solid win over Nebraska before absolutely destroying the fighting Dougie McBuckets (Creighton).

The Bears have been on fire lately, winning 12 of their last 14 games thanks to a balanced attack in all phases of the game. They have numerous guys in the 6'8"-7'1" range that are super-athletic and can cover players in the post and on the perimeter, which caused Creighton major problems.

Wisconsin is similar to that Creighton team in that they're smaller and are a big jump-shooting team, but they have more options and are just a better team than the Blue Jays. They have the shooting ability and floor balance to attack Baylor's zone effectively, so it should be an interesting matchup.

Prediction: Baylor. I'm a little biased because I had Baylor in the Elite 8 in my bracket, but I think this is really good matchup for them. They went through a rough stretch in late January (which is why they're only a six-seed) but they're an extremely talented team. Their size and athleticism will be a big problem for Wisconsin, and the Bears win comfortably.

The Wildcats have been one of the most consistently dominant teams in the country all year led by their massive frontcourt. Freshman Aaron Gordon gets most of the publicity for his highlight reel dunks, the rest of the team is highly efficient as well. Arizona is one of the best defensive teams in the country, especially at keeping teams out of the paint and away from the basket.

San Diego State is a team full of high-quality role players and one star in Xavier Thames. He tends to be their only option offensively, but Dwayne Polee has stepped up of late, averaging 15.5 ppg and shooting over 62% from long range over the last four games. If they're going to try and pull off this upset, both players are going to have to have huge games.

Prediction: Arizona. Both teams are mirror images in terms of style of play - they're great defensively, but can struggle on the offensive end. The Wildcats have put an increased focus on getting out in transition to get easy baskets over the last month or so, and their offense has picked up drastically. San Diego State isn't a good outside shooting team, and Arizona is one of the nation's best at defending inside the paint, which spells major trouble for the Aztecs.