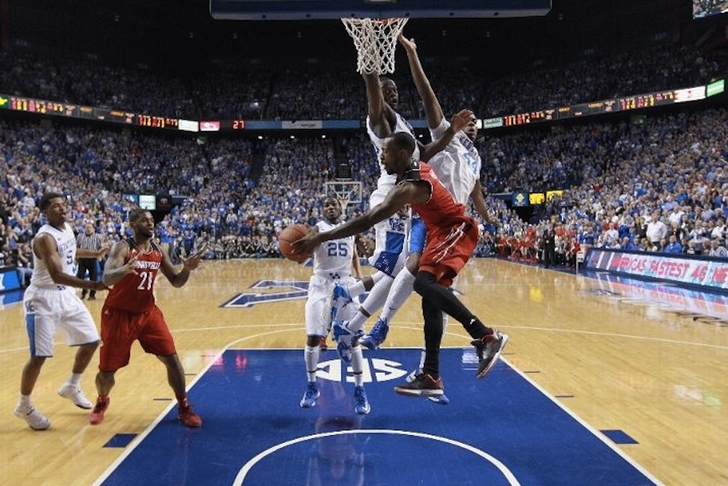 Friday's Sweet 16 matchups don't sport the Cinderella stories Thursday's did, but all four games look like they're going to go down to the wire.

The Wolverines blew out Wofford and Texas in their first two matchups of the tournament, while Tennessee started their tournament run in the First Four where they came back and beat Iowa in overtime before blowing out UMass and Mercer to get to the Sweet 16.

Michigan returns many of the same players that made the NCAA Tournament championship game last year, although that team's star player Trey Burke now plays for the Utah Jazz. Nik Stauskas' improvement from a standstill shooter to an all-around great player and has led him to become the heart and soul of this team. Michigan relies heavily on its shooting, especially from deep, and will need to continue to shoot the ball well if they want to make the Final Four.

Tennessee's run has been reliant on defense, post play, and matchups. Jarnell Stokes (14.7 ppg, 10.4 rpg) and Jeronne Maymon are full-grown men down low and cause major matchup problems for the opposition. But outside of them, only Jordan McRae (18.6 ppg) is a consistently viable offensive option. For them to pull off yet another upset, they're going to have to run Michigan off the three-point line, something their defense is already focused on.

Prediction: Michigan. Tennessee is a good team and has had a nice run, but there's a reason they're an 11-seed. They were pushed by Iowa, who has the same talent level as the Volunteers, and then upset UMass based on matchup discrepancy (UMass is entirely perimeter-oriented) before getting lucky with Mercer falling into their laps. Michigan has better talent and their zone will give Tennessee trouble offensively; they'll ultimately just outscore the Vols.

Nothing's better than one of the nation's most heated rivalries taking place in the NCAA Tournament, right? Kentucky held off Kansas State in the first round before handing Wichita State their first loss of the season, while Louisville survived a scare from Manhattan and then knocked off Saint Louis.

The Cardinals lost some key pieces from last year's national championship squad, but had many pieces return as well, led by Russ Smith (18.3 ppg, 4.7 apg). Louisville still likes to play really fast, averaging over 82 points a game, and they rely on their press to force a lot of turnovers. The difference for them has been the play of forward Montrezl Harrell (14.2 ppg, 8.2 rpg), who has given them a legitimate low post presence to go along with their guard play.

Kentucky's young squad seems to have turned the corner and has the talent to continue their run, led by super-freshman Julius Randle (15.1 ppg, 10.5 rpg). He is part of a huge front line that could give Louisville some trouble with their massive size. The key for the Wildcats will be the play of the Harrison twins and their ability to take care of the ball against Louisville's pressure.

Prediction: Louisville. Kentucky won their first matchup early in the season 73-66 in Rupp Arena, but the Cardinals are a much different team now. This game will be extremely tight throughout, and Louisville has the experience that will lead them to the victory.

Iowa State cruised past North Carolina Central and then beat North Carolina on a last second shot from star point guard DeAndre Kane. Connecticut used key shots down the stretch to come back and beat St. Joseph's in the Round of 64 and then knocked off 2-seed Villanova in an old-fashioned Big East showdown thanks to a whole lot of point guard Shabazz Napier.

The Cyclones are one of the best offensive teams in the nation. They rank sixth in the nation in points per game (they average just under 83), and are the the best in the country at sharing the ball, averaging 18.3 assists per game. Forward Melvin Ejim (18.1 ppg, 8.5 rpg) is the matchup nightmare of all matchup nightmares, being able to dominate in the post and stretch the defense from three.

UConn revolves around one person—Shabazz Napier. He leads the Huskies in nearly every category (17.4 ppg, 5.9 rpg, 4.9 apg), and is one of the most unstoppable players in the nation. His backcourt mate Ryan Boatright is no slouch either, but UConn's post game is practically nonexistent. They are a one-man band that is average on both ends of the floor, but Napier can make them special.

Prediction: Iowa State. This game is going to fun to watch, especially the battle between DeAndre Kane and Shabazz Napier. However, Napier's 6'1" and Kane is a legitimate 6'6". That height will give Napier problems, and the Cyclones have more weapons. The game will be fast-paced and entertaining, but Iowa State will win this one easily.

This might turn out to be the best game of the night, and one of the best matchups in this year's tournament. Virginia narrowly avoided a massive upset at the hands of Coastal Carolina in the first round, and followed that up by walloping Memphis. Michigan State knocked off Delaware before holding on to beat a pesky Harvard squad.

UVA has been one of college basketball's feel-good stories this year. They didn't have incredibly high expectations and didn't have a phenomenal start to their season, but they've only lost two games since the calendar turned. The Cavaliers rely on outstanding defense—they're the best in the country, only giving up 55.5 points a game—along with a balanced offense and a high level of execution. Sophomore Malcolm Brogdon (12.6 ppg, 5.6 rpg) has stepped up and is one of the most underrated players in the country, joining senior Joe Harris (11.7 ppg), who's found his offensive game again this March.

Michigan State was supposed to dominate this year until their season got somewhat derailed by injuries. Point guard Keith Appling still has a hurt wrist, but the return of big man Adreian Payne (15.8 ppg, 7.4 rpg) has boosted this team back into the national championship conversation, and they are the favorite among most pundits. They have been on a roll since the start of the Big Ten Tournament, but maybe the most compelling thing about this team is that every senior class under Spartan head coach Tom Izzo has been to a Final Four—except for this one. Appling and Payne, along with sophomore guard Gary Harris (projected top-10 pick in the NBA Draft), will try and change that.

Prediction: Virginia. Maybe it's because I cover the ACC and am a little biased, but I have fallen in love with this Cavalier team after watching them play all year. We all know about their defense, but their offense is sneaky good. Every single player they put on the court can hurt you at both ends of the floor—they just like to play a half-court game, which limits possessions and doesn't lend itself to great offensive statistics. There's so many outstanding individual matchups in this game—Gary Harris vs. Brogdon, Payne vs. Akil Mitchell, etc.—that it will likely be one of if not the best game of the tournament. UVA head coach Tony Bennett is an underrated star, and with his team fighting for respect, I think their inspired play pulls out the three-point victory.