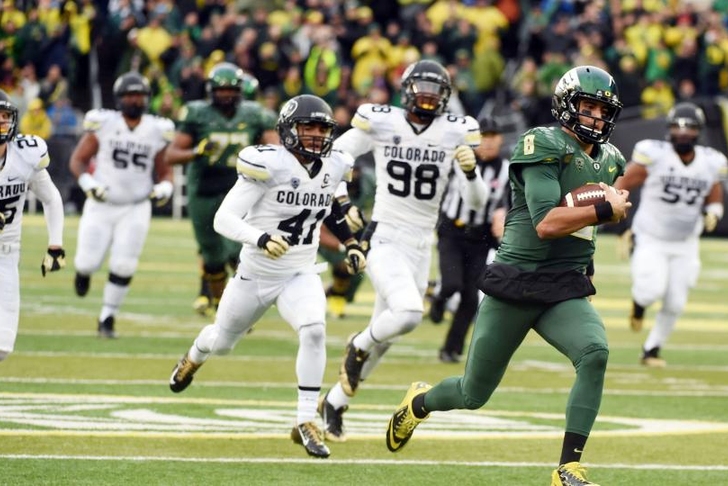 All of the top teams managed to avoid upsets and slow starts this past weekend, which sets up an incredibly exciting college football Saturday after Thanksgiving. Every top team either faces a rival or a top-25 team (or a ranked rival) meaning the selection committee's rankings could look entirely different next week. How will everything play out?

This Week: Sat. at Penn State

Michigan State's only chance of finishing in the top four involves all of the top teams losing. That probably won't happen, but those top squads will beat a couple of the teams ranked ahead of them, which is how they will finish eighth and play in one of the six New Year's bowls.

This Week: Thurs. at Texas

This game scares me for TCU. Texas has won three games in a row and four of their last five, and are a much more physical team than the Horned Frogs. Both sides had an extra week to prepare for this game, which I think benefits head coach Gary Patterson and TCU. The Horned Frogs will find a way to survive in an extremely close game, and then beat Iowa State on December 6. However, they haven't looked impressive lately and I think will fall to seventh in the rankings by the end of the year.

This Week: Sat. vs. Michigan

Ohio State pulled away in the fourth quarter to avoid being upset by Indiana, clinching a spot in the Big Ten title game. That win wasn't impressive, and win over Michigan won't bolster their resume - but a win in the conference championship game will, which is why I expect the Buckeyes to jump TCU at the end of the season.

This Week: Sat. at Texas Tech

The Bears took care of business against Oklahoma State, and should do the same this weekend against a bad Texas Tech team. That would set up a showdown with No. 12 Kansas State on December 6, in which a win would give Baylor the Big 12 championship. We still don't know how much the selection committee will value conference champions - if it's a big point of emphasis, Baylor will find themselves in the playoff.

This Week: Sat. at Ole Miss

The Bulldogs responded to their loss to Alabama with a resounding win over Vanderbilt, and will close the season with a road contest against rival Ole Miss. I expect them to beat the Rebels, but the win holds a lot less vindication after Ole Miss lost to Arkansas 30-0 over the weekend. However, I think they'll get in over Baylor because their only loss of the season is to a team ranked ahead of them, while the Bears fell to West Virginia. Mississippi State has the better loss, which is why they get the nod into the playoff.

This Week: Sat. vs. Florida

Florida State keeps finding ways to win, this time on a last-second field goal to beat Boston College. The Seminoles will be in no matter what as long as they keep winning. Florida will come out and play their hardest as this game could salvage some of their season, but I'm not betting against Florida State. Jameis Winston and FSU will find a way to beat the Gators and then beat Georgia Tech in the ACC Championship Game, putting them in the playoff.

This Week: Sat. vs. Auburn

Alabama desperately wants revenge for last season's heartbreaking loss to Auburn, and they'll be the heavy favorite in the SEC Championship Game whether they play Missouri or Georgia. They'll win both of those games, setting themselves up for the top seed in the playoff. However, because I think Mississippi State will grab the fourth seed, the committee will drop the Tide to No. 2 to avoid a first round rematch.

This Week: Sat. at Oregon State

Oregon will grab the top seed if they win out, which will be no small task. They'll need to beat Oregon State in Corvallis - where the Beavers ended Arizona State's playoff hopes - before facing UCLA, Arizona, or those Sun Devils in the Pac-12 title game. Heisman front-runner Marcus Mariota should guide this team to victories in those games.