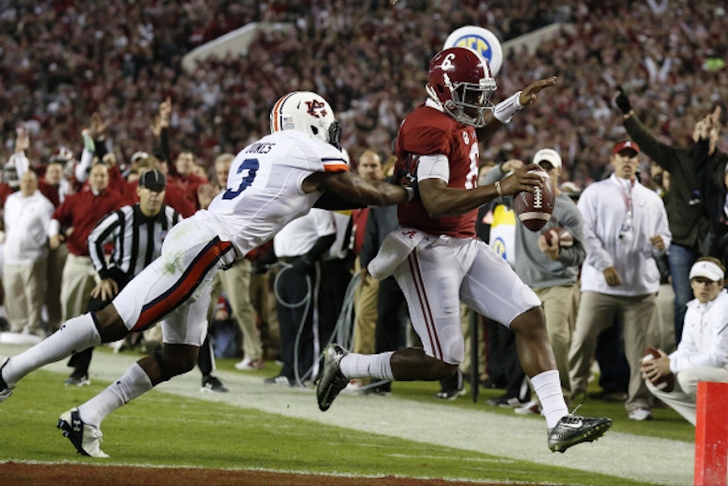 Six teams remain in the hunt for the college football playoff with just one week remaining on the schedule. No. 4 Mississippi State was eliminated with their second loss of the season to Ole Miss, creating an open spot for Baylor, TCU, and Ohio State to fight over. Who's going to end up grabbing that final seed?

This Week: Sat. vs. Wisconsin

Ohio State got the win they needed over Michigan to stay alive, but the loss of quarterback J.T. Barrett to an ankle injury will hurt their chances of finishing in the top four. Barrett was playing like a Heisman candidate after filling in for injured started Braxton Miller, and it's going to be extremely hard for the committee to put a team playing their third-string quarterback in the playoff now matter how good they may look against Wisconsin.

This Week: Sat. vs. Iowa State

TCU put on a dominating performance against Texas on Thanksgiving, making a strong statement to the selection committee after struggling to beat Kansas. They need to rack up the style points and blow out Iowa State to make up for their loss to Baylor, which is a very real possibility with how bad the Cyclones are.

Baylor really struggled against Texas Tech once quarterback Bryce Petty left with a concussion (he'll be back to play Kansas State), which has the Bears on shaky ground with the committee. However, I think they'll grab the final playoff spot because they will beat Kansas State and get the nod over the Horned Frogs due to their head-to-head victory.

This Week: Sat. vs. Georgia Tech

Florida State pulled out another close victory over the Gators despite four interceptions from Jameis Winston, and now face their toughest test of the season in a surging Georgia Tech squad. FSU's rush defense will be put to the test against the Yellow Jackets' dynamic option attack, but I expect this team to continue to make enough plays to win and extend their 28-game winning streak.

This Week: Fri. vs. Arizona

Oregon has a chance to avenge their only loss of the season against Arizona in the Pac-12 Championship Game on Friday night, but the Wildcats are a legit top-10 team that are more than capable of pulling off the upset. The Ducks have been playing on another level ever since that first loss, and I expect them to play extremely motivated football and beat Arizona to clinch their bid in the playoff.

This Week: Sat. vs. Missouri

Alabama will hold on to the No. 1 spot after their huge comeback victory over Auburn, and now will look to avoid the upset bug against Missouri. The Tide should handle the Tigers easily, but they can't afford to look as sloppy as they did in the first half against Auburn if they want to hold on to the top seed.