NCAA Football Playoff Predictions: Can Anyone Stop the Mississippi Schools? 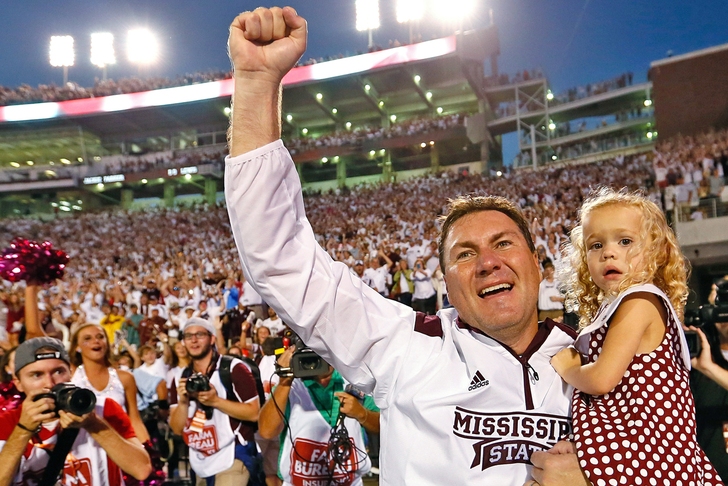 Last Saturday reminded us why we love college football. There were big games between ranked conference rivals throughout the day with a couple of upsets sprinkled in, giving fans across the country non-stop entertainment.

Once the dust settled, one thing was clear - Mississippi State and Ole Miss are the two best teams in the country right now. They have the biggest wins and have looked more impressive than any other team in the nation.

Fans have already circled their game at the end of the season - nicknamed the Egg Bowl - as what will be the game of the season and decide who plays in the SEC Championship Game.

However, both look like they'll be in the College Football Playoff at the end of the season. Who else will join them?

This Week: Sat. at Indiana

Michigan State continues to take of business in the Big Ten, which hasn't given them any momentum to move them up this list. They'll make the playoff as long as they keep winning and let the teams in front of them start falling off - which is why Vegasinsider.com has the Spartans listed as the favorites to win the national championship. The Spartans don't have another test until November 8 when they host Ohio State, so expect them to keep cruising until then.

This Week: Sat. vs. Washington

The Ducks dropped out of our rankings last week after losing to Arizona, but jumped back in the mix after they dominated UCLA in the Rose Bowl. The final score was a lot closer than the game actually was (Oregon was up 42-10 in the fourth quarter before shutting it down). Marcus Mariota has played like his dominant self all season, and now it seems like his team is finally starting to catch up with him. Now Oregon gets another Arizona-like test against a Washington team that's looking for a marquee win, so they better come to play if they don't want to fall out of these rankings for good.

Oklahoma did not look great against Texas, but their close loss at TCU looks a lot better after the Horned Frogs should have beaten Baylor. Even though they'll likely be double-digit favorites against Kansas State, the Wildcats will still provide the Sooners with a tough test that will boost their resume with a win.

Similar to Oklahoma, the Crimson Tide just have not looked good over the last two weeks. They avoided disaster against Alabama, and now will look to get back on track at home against a struggling Texas A&M team. Another loss will end 'Bama's season, so expect them to come out on fire and dominate from the opening whistle.

Auburn was the latest victim to run into the Mississippi State buzzsaw, and as a result don't lose too much ground in the standings. They still had a chance to beat the Bulldogs at the end, and now have a bye week to reset and get their season back on track.

This Week: Sat. at West Virginia

Baylor pulled off a dramatic, 24-point fourth quarter comeback against TCU, who have proven to be a much better team than we thought they were. However, the win was concerning because of just how easily the Horned Frogs were able to shred Baylor's supposedly improved defense. For the Bears to make the playoff at the end of the year, their defense is going to have to be much better, and we'll find out if they can make any improvements against a really good West Virginia offense.

This Week: Sat. at Florida State

Notre Dame still has not looked like a top-four team, yet here they are. The Irish keep finding different ways to win games, and being undefeated has them in the position they're in now. They have a chance to validate themselves this weekend with their toughest test of the season - facing Florida State in Tallahassee. If Notre Dame can find another way to win, they'll be up there with the Mississippi schools as the best teams in the country.

This Week: Sat. vs. Notre Dame

Jameis Winston and the Seminoles got back to looking like the dominant football team we expected the defending national champions to be against Syracuse, and now they'll look to take that momentum into their biggest game of the year. To this point, Florida State has stayed near the top of rankings based on what they did last year, but can make their claim as one of the best teams this year with a win.

This Week: Sat. vs. Tennessee

Ole Miss followed up their win over Alabama with another resounding win at Texas A&M which was another game that was much more of a blowout than the score indicated. The Rebels' defense has proven to be one of the best in the country (20 points is the most they've given up all year, and two of those touchdowns came in garbage time), and looks like they'll be able to carry this team to the College Football Playoff.

The Bulldogs now have two straight blowout wins over top-6 teams, and are the most proven team in the country to this point. Quarterback Dak Prescott has led this middling  program to new heights, and nothing Mississippi State has faced has been able to slow them down. This team looks destined for the College Football Playoff, and no one looks like they're going to be able to beat them.

Who do you think is this year’s dark horse to make the College Football Playoff? What four teams would you put in? Tweet your thoughts to @brauf33 and leave a response in the comments!

2014 Heisman Power Rankings: Dak Prescott is the Man to Beat