Instant Reaction: Oregon Back On Track After 42-30 Win Over UCLA 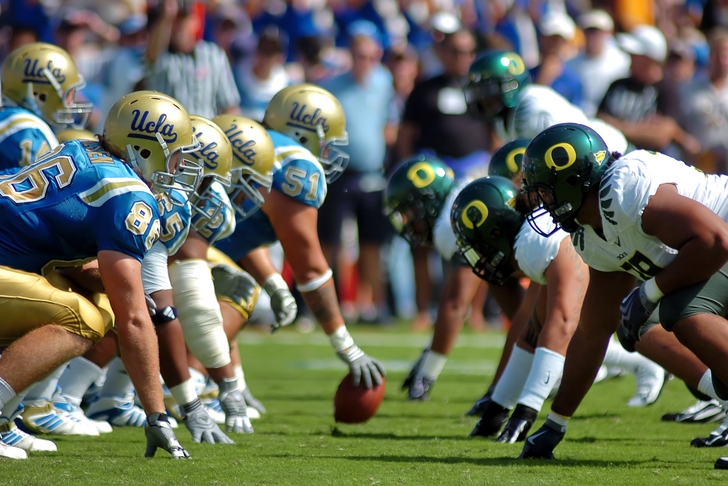 After a surprising loss to Arizona last week, the Oregon Ducks bounced back with a big win over Brett Hundley and the UCLA Bruins.

Oregon's offense got back on track with QB Marcus Mariota leading the charge, and UCLA just wasn't able to keep up despite a solid performance from Hundley.

Turning Point: UCLA ended the first half down 21-10, but Oregon scored fourteen points in just over a minute of live playing time in the third quarter to put the game out of reach.

Key Stat: 1022 - that's how many combined yards of offense we saw today, with UCLA outgaining Oregon 553 to 469. The numbers (and the final score) flatter UCLA, which added some gloss to what was a one-sided scoreline until late in the fourth quarter.

Oregon MVP: QB Marcus Mariota got his team and his season back on track. Mariota finished 17/27 with 210 passing yards, 2 TDs and no INTs...plus 75 yards rushing and two rushing TDs on seven carries.

UCLA MVP: Hundley and running back Paul Perkins share the credit - Hundley went 26/37 for 216 yards, two TDs and 1 INT (plus 89 rushing yards and a TD on 22 carries) while Perkins racked up 187 rushing yards on 21 attempts.

What They'll Be Talking About: Jim Mora and UCLA defensive coordinator Jeff Ulbrich got into a heated shouting match during the second quarter, and while it looked like the two men resolved their differences, you can expect to see the clip replayed on every sports show you can think of this week.

What’s Next? UCLA travels to Berkeley to take on the Cal Bears, while Oregon hosts a dangerously underrated Washington squad.