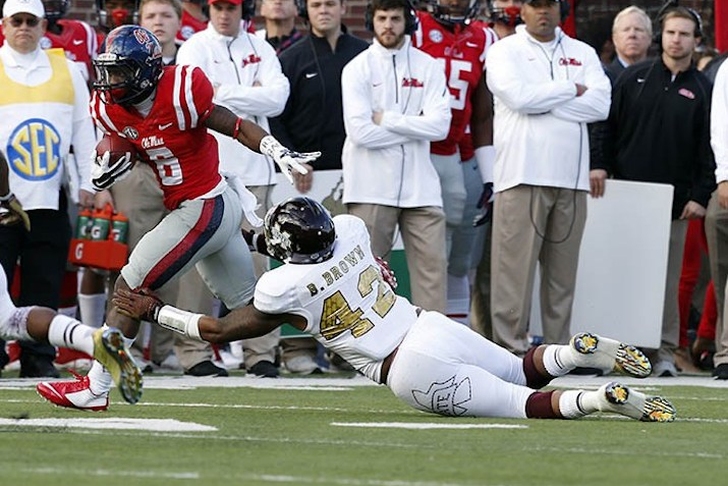 The final week of the regular season is now in the books, and its results have really changed the race for the College Football Playoff. How to the top teams stand going into conference championship weekend? It looked like the Crimson Tide were going to be the biggest upset victim of the day, but they showed why they're considered to be the best team in the country. Their defense stepped up, and wide receiver Amari Cooper (13 catches, 224 yards, 3 TDs) showed why he might just be the best player in college football. With just one game left against Missouri in the SEC Championship Game, Alabama is well on its way to claiming the top seed in the College Football Playoff. Oregon took control of this game against their in-state rival early and dominated throughout. The Ducks have earned their place in the top four of college football, and have a chance to redeem their only loss of the season in the Pac-12 Championship Game against Arizona on Friday. If Oregon can win that game, they're a lock to be in the playoff, and would challenge Alabama for the top seed in the bracket. Florida State is the only FBS team that has gone through the regular season unbeaten, and they're guaranteed to be in the playoff if they can beat Georgia Tech in the ACC Championship Game. The Seminoles have now won a remarkable 28 games in a row, and no matter how bad they may look when they fall behind in the first half, they find a way to emerge victorious. This team will be extremely tough to beat come playoff time because they know how to - and expect to - win. The Bulldogs will now fall out of the College Football Playoff picture after losing for the second time in their last four games. They also lost the SEC West race to Alabama, so they won't have a chance to redeem themselves. Mississippi State will still go to the best bowl game they've been to in a long, long time, but they won't be in the playoff. On the surface Ohio State's playoff hopes got a big boost with Mississippi State's loss, but they suffered a bigger loss of their own. Quarterback J.T. Barrett broke his ankle and is out for the rest of the season. That certainly hurts the Buckeyes' chances because they won't be the same team without him, and with the playoff race as tight as it is, it'll be hard for the committee to put a team starting its third-string quarterback into the playoff (remember, Ohio State lost starter Braxton Miller before the season started). Ohio State still has the Big Ten Championship Game against Wisconsin to show they can play well without Barrett, but it's now an uphill battle for them to get into the top four. The Bears had a 25-point lead against the worst team in the Big 12, but were holding on for dear life after quarterback Bryce Petty left with a mild concussion in the third quarter. It remains to be seen whether he will play against Kansas State next week, but this game hurts Baylor's playoff chances more than just that. Baylor is looking to gain style points to jump Ohio State and (5) TCU to get into the top four at the end of the season, and beating a terrible Texas Tech team by just two points won't help that cause. The Bears are going to have to beat Kansas State in impressive fashion - or have a couple of the teams ahead of them lose - to make the playoff. Georgia had a chance to move up as the highest ranked two-loss team in the country after (8) UCLA fell to Arizona on Friday, but they let the game against the Yellow Jackets slip through their fingertips. The Bulldogs are now totally eliminated from playoff contention.

(10) Michigan State will move up the rankings, but they will probably still find themselves behind Mississippi State in the rankings because of their lack of a big win.

What did you takeaway from Saturday's action? Who do you think will make the playoff? Tweet your thoughts @brauf33 and leave a response in the comments.

Michigan Football: Top Ten Replacements for Brady Hoke If He Gets Fired