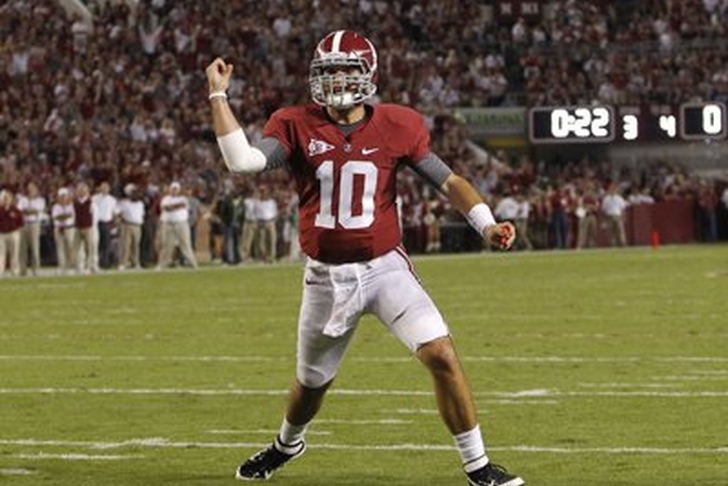 The race for the Heisman went into self-destruct mode this past week, as two of the top three candidates listed in last week’s column just couldn’t get it done this weekend.

Bryce Petty’s chances to take a trip to New York took a huge knockout punch in Baylor’s blowout loss to Oklahoma State. Johnny Manziel couldn’t seem to find a rhythm against a LSU defense that schemed him extremely well. The Tigers canceled out Manziel so well, in fact, that they broke the Aggies 13-consecutive streak of games scoring 40+ points.

So let’s wipe the slate clean with this Heisman thing and start all over. This year’s Heisman Race will be decided by the best sprint to the finish. Let's take a look at the three players that currently lead the race:

A.J. McCarron goes from being on the bubble to leading the pack. McCarron’s status as top dog will be challenged this weekend against a #4 Auburn team in possibly the nation’s most bitter rivalry game.

The “Iron Bowl” will determine who will represent the SEC West in the SEC Championship game in Atlanta. An Auburn upset could create a "cannibalization effect" that could prevent the conference from getting a shot at defending their title streak. If McCarron can get through the Tigers, and whoever comes from the East (Missouri or South Carolina) then he’s almost a shoe-in for the trophy. Winning these next two games for Alabama sounds a lot easier than the reality of the situation. If anyone can do it, though, it’s Nick Saban's Crimson Tide.

Andre Williams from Boston College soared to the top echelon this week thanks to his ridiculous stats this season. Williams has racked up nine 100+ yard efforts, five of those for 200+ yards, and one being 300+ yards. Williams has rushed for over 2000 yards this season, joining names like Barry Sanders, Marcus Allen, and LaDanian Tomlinson. If Alabama falls at any point, Williams is the practical heir to the trophy at this point.

Finally, Jameis Winston makes the list, but his status is by far the most clouded at this point. If any charges are filed against him as a result of the ongoing sexual assault investigation, Winston’s hopes will vanish with an obvious suspension forthcoming. If no charges are filed, Winston’s numbers would certainly make him the frontrunner.

With rivalry week upon us, there are some names that are still waiting in line should one of these three implode like two out of the three did last week. Johnny Manziel could rise straight back to the top if he can snag a signature victory on the road this week in Missouri while putting up some jaw-dropping statistics. Even his worst game didn’t drop him completely out of the race. If Manziel wants his name to remain in the hat, he needs a huge day against the #5 Tigers.

Tajh Boyd can get himself back into the conversation if he can guide his team to victory against South Carolina. Boyd still hasn't achieved a win in Columbia during his college career, but if he can end South Carolina’s home winning streak, he might be in the conversation. Boyd would also have to make some sort of statistical impact, along with the win.

Ka’Deem Carey of Arizona got some looks after carrying the rock for over 200 yards and scoring four TDs in a shocking win over the Oregon Ducks last week, but he'll need to make some extreme noise this weekend when the Wildcats take on PAC-12 South champ Arizona State.

Then there are guys like Fresno State Quarterback Derek Carr. Carr threw for seven TDs last week against New Mexico, but he still won't get any consideration whatsoever. It’s okay, though - at least he got a couple sentences in here. Carr takes on David Fales and San Jose State on Friday in what should be a passing clinic.

If all of the above fail to grab that third spot, look for Jordan Lynch to get an invite. Even if Northern Illinois finishes undefeated, he still won’t be invited by default. That being said, he'd still sneak into the conversation before somebody like Derek Carr. If multiple guys above him in this article fail in the following weeks, look for Lynch to be a dark horse for an invite to the ceremony.

At this point, it really wouldn’t be impossible for another name to come off the grid - improbable, sure, but not impossible. With the unpredictable nature of College Football, we’ve learned nothing is impossible, and we still have a lot of football left to be played.