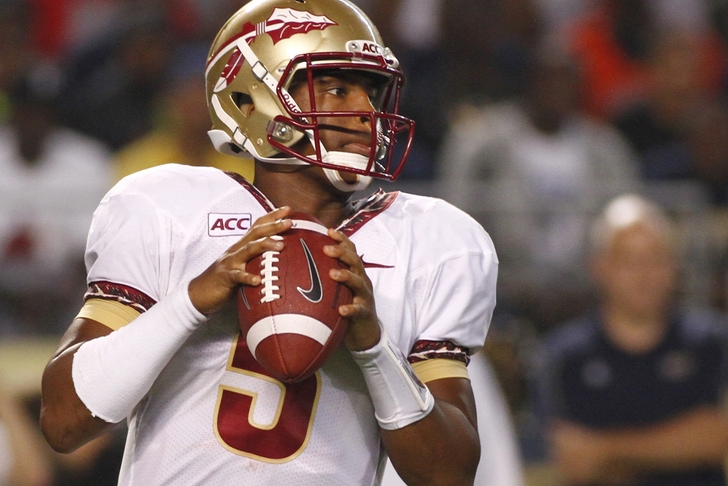 Football is finally back on Thursday, and it can't come soon enough.

This season is shaping up to be one of the most intriguing in recent memory thanks to the introduction of the College Football Playoff, as well as the return of Jameis Winston. Will he become perhaps the best quarterback in NCAA history by winning the Heisman again, or will someone else grab the spotlight?

All season long we'll be following the nation's best players as they compete for college football's most coveted individual award and evaluate their chances of winning. Who has the best chance at taking Winston's throne?

This one doesn't need a whole lot of explanation. Winston is the reigning Heisman trophy winner and, until we see otherwise, is the favorite to win it again.

Now, a number of factors are against him. Only Archie Griffin has won two Heismans, and voters seem more apt to vote for someone "new" to the mix. Winston set the bar really high for himself a year ago (4,057 yards, 40 touchdowns) and will have to produce a better season to win this award again. And, given FSU's easy schedule, any loss will derail his chances.

Many people like Mariota to take the Heisman away from Winston this year, and he very well might. He's mastered the Ducks' high powered offense, and was one of the most efficient quarterbacks in the country last year (31 TDs, 4 INT).

His outstanding running ability gives a dimension that none if the other QBs on this list have, and that could be a big factor when deciding the best player in the nation.

However, his (and Oregon's) Achilles' heel has been losing to lesser teams (and to Stanford). Losing a game doesn't kill his chances at the Heisman like it does Winston's - as long as it's to one of the Pac-12's other good teams, and not getting blown out by someone like Arizona.

Petty is the driver of Baylor's record-setting offense, and he's back to try and duplicate his impressive 2013 campaign (4,200 yards, 32 TDs).

Most of his weapons from last year's squad are gone, but that gives Petty the chance to lead and carry and Bear team that's still extremely talented. If he can guide them to a Big XII title and a berth to the college football playoff, you can book Petty for the trophy.

Hundley and his UCLA team have been the darlings of the preseason.  They've become everyone's "surprise" pick to win the Pac-12 and make the College Football Playoff that they're no longer a surprise.

Either way, the Bruins will be really good in 2014, and Hundley is the biggest reason why. He's the prototypical quarterback who has the ability to run, although not as well as Mariota.

He'll also have a chance to make his case for the Heisman on national TV against Mariota and Oregon on October 11. If he outplays Mariota in that game and the Bruins are at least competitive in getting to the playoff, Hundley could develop an RGIII type following that he could ride to the Heisman.

Running backs don't win this award too often anymore, but if anyone can do it in 2014, it's Todd Gurley. He's a big, bruising back (6'1", 226 lbs.) that has breakaway speed - essentially, he's the total package.

His Georgia team will have a new starting quarterback for the first time in four years, along with several inconsistent receivers. That means the running game will be heavily relied on, and Gurley is more than able to carry the load.

The only question about him is his durability - he missed almost all of last October with an ankle injury. If he can stay healthy, he has a shot to win this award, but he can't have any quarterback stand out since voters are enamored with them.

Like Georgia, South Carolina will have a first year starting quarterback under center and unproven receivers, meaning the running game will be heavily relied on.

Davis had a breakout year in 2013 - his first as the starter - with 1,183 yards and 11 TDs, yet he still managed to stay under the radar nationally. He'll have a chance to introduce himself to the country Thursday night against Texas A&M's atrocious defense, which could out some major wind in his Heisman campaign sails.

That said, he comes with durability issues as well (ankle, shoulder, rib injuries a year ago), and is coached by Steve Spurrier, who is notorious for getting pass-happy. If he gets his opportunities, Davis will have a huge impact for the Gamecocks.

Knight burst onto the scene in Oklahoma's win over Alabama in the Sugar Bowl (348 yards, 4 TDs), and as usual, everyone took the offseason to overreact.

Knight didn't win the starting job until very late in the season a year ago, and was inconsistent when he did play. In saying that, he was absolutely outstanding against the heralded Crimson Tide defense.

If he can keep up that level of play - and not fall victim to the disappointing season that high-ranked Oklahoma teams always seem to do - he suddenly moves into the conversation with Winston and Mariota.

Stanford is expected to take a step back this year, but Hogan is the biggest reason why that might not happen. He's now going into his third season as the starter on Palo Alto and has developed into more than a game manager.

The Cardinal aren't a flashy team and rely on their ground game, which will hurt Hogan's numbers and appeal, but head coach David Shaw might be forced to open things up a little more this year with his experience under center.

Gordon benefits from playing in a run-heavy system in a weak conference. He was dynamite as a freshman (1,609 yards, 12 TDs) while splitting carries with James White, but now the Badger backfield is all his.

Wisconsin's opener against LSU will be a big test for Gordon and his Heisman campaign. That's the Badgers' lone game against a team ranked in the preseason top 25, and Gordon's one real chance to make a splash on the national scene against a great defense. If he plays well, he suddenly gets into the mix with Gurley for the nation's best running back - but if not, his Heisman hopes will be done.

Arizona State - not UCLA or USC - won the Pac-12 South last year, and Kelly was one of the biggest reasons why (3,635 yards, 28 TDs). He's now in his third year as the full time starter, and will get plenty of opportunities to throw the ball around in Sun Devil head coach Todd Graham's pass-happy offense.

Kelly's probably the most "dark horse" candidate on this list, but he has all the makings of a Heisman winner. First off, he's a very good quarterback that's underrated, meaning voters will be wowed when he plays well. That holds true for his team, too, given the amount of love that UCLA and USC are getting.

If Kelly can put up close to 4,000 yards passing and have over 30 TD passes, he'll put himself in the mix - and if he can lead his Sun Devils to victories over UCLA or USC (or both), his Heisman campaign will start to carry a whole lot of momentum.

Who's your pick for the Heisman? Who else should be on the list? Leave a response in the comments!