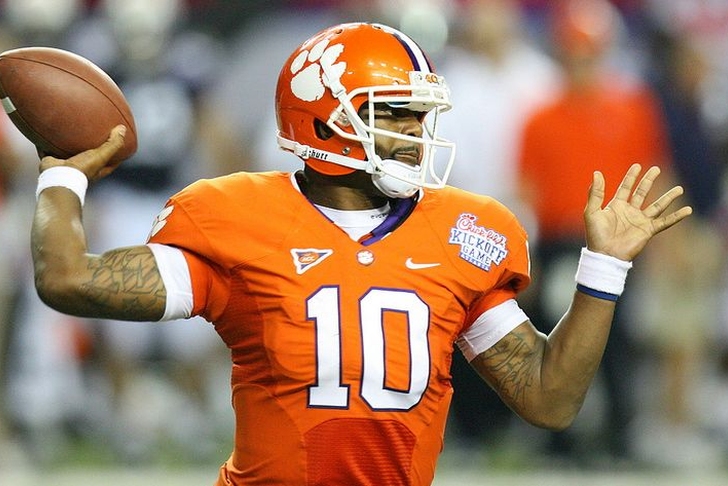 Welcome to week five of our Heisman Power Rankings - each week, we use our thorough, data-driven algorithm to predict the eventual winner of this year’s Heisman trophy. None of our main contenders lost games last Saturday, but some uneven performances shook up our top 5 yet again.

In our weekly series that predicts this season’s Heisman winner, we take several factors into account:

Unfortunately for Arkansas, Johnny Manziel really likes playing against Arkansas. Manziel single-handedly demolished the Razorbacks last year, accounting for 557 offensive yards, and while this year's game wasn't quite as one-sided as last year's 58-10 demolition, it was still impressive enough for Johnny Football to stay in pole position.

253 of Manziel's 320 total yards on Saturday came in the first half (along with both of his TD passes), and the shell-shocked Razorbacks never recovered. Manziel was creative, elusive, and extremely accurate, and the Arkansas defense never found an answer for him. The Aggies have a week off before they travel to #24 Ole Miss, and we'll be interested to see how Manziel's performance against the Rebels stacks up to Alabama QB AJ McCarron's (the Rebels held McCarron to 180 passing yards and an interception, with no touchdowns last Sunday).

Tajh Boyd and the #3 Clemson Tigers just keep on rolling, and Boyd rebounded from his "down" week against NC State with a huge four-touchdown performance against the Wake Forest Demon Deacons. Boyd's 75-yard strike to DJ Howard in the first quarter was his 100th touchdown as a Clemson player, and he won't be stopping there.

Clemson's ACC schedule gives Boyd a slight edge over his SEC competition, but there are still two massive games left on his slate: October 19th against fellow Heisman hopeful Jameis Winston's #8 Florida State, then a trip to #13 South Carolina on November 30th, the last day of the regular season.

Next game: Saturday October 5 vs #25 Maryland

It was only a matter of time before the nation's most dynamic freshman worked his way into our power rankings. Jameis Winston is a phenom in every sense of the word, and he's responsible for the incredible resurgence of a Florida State program that looked stuck in quicksand before he got there.

Winston has thrown 12 touchdowns and 2 interceptions so far this year. He's completing a ridiculous 73.6 percent of his passes, and FSU is averaging 51.3 points per game - good for 4th in the nation. It'll be interesting to see if Winston can maintain this level of performance once FSU's schedule ramps up - they face #25 Maryland on Saturday, and then after a bye week they'll travel to #3 Clemson.

In a bizarre game at Autzen, the Ducks looked like they were on pace to score 100 points until the first half was almost over, then did very little during the second half. Despite the final score, Mariota was fairly unimpressive against the Golden Bears, going 11/25 against a secondary that Ohio State's backup QB Kenny Guiton absolutely eviscerated. To be fair, Cal stayed competitive against OSU well into the second half, while Oregon put them to bed before the first quarter had ended.

Blowouts like this make it hard to get a read on where Mariota really stands in the Heisman race. Oregon still haven't played an opponent good enough to keep Mariota on the field for all four quarters, and we won't know if he's legitimately Heisman material until that happens. For now, Oregon's gaudy offensive numbers keep him at the #4 spot, but accuracy issues like he had on Saturday won't help Mariota gain ground on guys like Boyd and Manziel.

Bridgewater had the weekend off, but his stellar performance vs FIU keeps him in the top five - barely. Bridgewater won't win the Heisman trophy without a slip-up from multiple other candidates. As good as he looks, Louisville looks like they'll make it through the entire regular season without playing a ranked team, and his only chance to show off against quality opposition will probably come in a bowl game.

Could that be enough? It depends just how obscene Bridgewater's numbers are at the end of the season, and whether Louisville is still undefeated when the dust settles. For Bridgewater to be the first Heisman winner from outside one of the major conferences since 1990, skill and stats won't be enough - he's going to need plenty of luck, too.