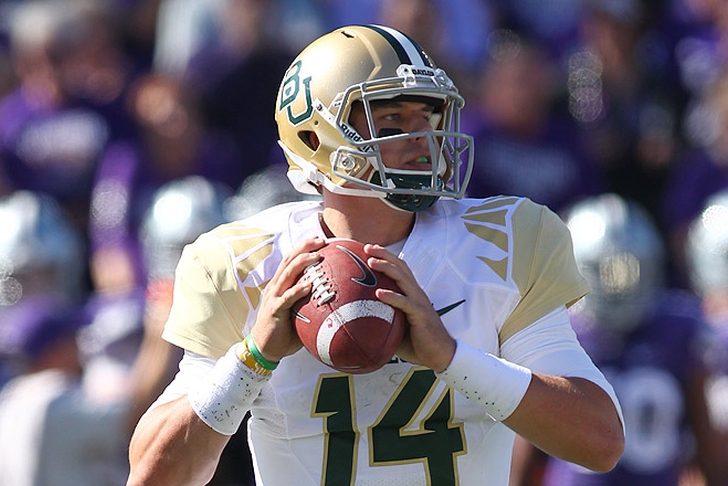 Some wild games this past weekend did little to shake up our top three, as Jameis Winston and Bryce Petty both had excellent games and Johnny Manziel had the weekend off. With several excellent candidates playing at a high level, this year's race is guaranteed to go down to the wire.

4. Position played: QBs will be given additional weight given their recent domination of the Heisman award

6. Performance in big games – does each candidate have a “Heisman moment” on their resume?

Heisman Moment: Yes – racking up 446 yards of total offense and four touchdowns in FSU’s blowout of then-#3 Clemson on the road.

Florida State is dominating opponents to the point where Winston rarely has to play in the second half of games, but his first-half stats are impressive on their own. Winston completed 19 of his 21 pass attempts against Syracuse, and the game ended up a carbon copy of the Seminoles' Week 11 win over Wake Forest - a 59-3 demolition of an overmatched ACC opponent. The whispers about a 2012 sexual battery case involving Winston are still just whispers, and until factual information is released or actual charges are filed, this isn't a story worth paying attention to.

Heisman Moment: Not yet - Manziel has come close twice in narrow losses to Alabama and Auburn, but he (and the Aggies) are still looking for a signature win.

Johnny Football had Week 12 off, but still hangs on to the #2 spot after his strong Week 11 showing. With #22 LSU coming up next weekend followed by #8 Mizzou the week after, Manziel still has two chances for a real Heisman moment, but the clock is ticking. Manziel will certainly be in the Heisman conversation thanks to his fantastic stats, but the lack of a win over a ranked team is a glaring hole in his resume. Baylor's Bryce Petty is extremely close to overtaking Manziel in the #2 spot, and he'll essentially need to pitch a no-hitter from here on out if he wants to win a second Heisman trophy.

Heisman Moment: Petty torched then-#10 Oklahoma for five touchdowns in his first real test of the year, and since then he's bolstered his resume with another five-TD showing against Texas Tech.

Petty owns the highest passer rating in all the land, and might end up being Jameis Winston's biggest competition for the Heisman by the time the ceremony rolls around. Plenty of people thought Baylor would crumble once they hit the tough part of their schedule, but in two games against very good teams (Oklahoma and Texas Tech), Petty has thrown for six touchdowns and 539 yards while running in four touchdowns on the ground. Despite going down early to the Red Raiders, Petty stayed cool and ended up turning a potential upset into a massive win. Baylor has won its last two games by a combined score of 104-46, and if they can keep scoring touchdowns at this pace for the rest of the season, Petty stands an excellent chance at taking home some hardware.

Heisman Moment: Mariota was stellar against #16 Washington, compiling four touchdowns and 454 total yards in a 45-24 win, but canceled that out with his no-show against #5 Stanford.

Mariota rebounded well from his awful game against Stanford, leading the Ducks to a comprehensive win over a tricky Utah squad. He'll need others to falter if he wants to win the Heisman, so Mariota needs to play mistake-free football the rest of the way to stay in contention. Oregon faces two dynamic offenses in their last two regular-season games against Arizona and Oregon State, and if they turn into shootouts, Mariota will have a great opportunity to pad his already-impressive stats.

Heisman Moment: Almost - Miller threw four TD passes and ran for 83 yards to carry the Buckeyes to a win over #23 Wisconsin, but this doesn't stack up to what guys like Winston and Petty have done so far.

Braxton Miller makes his first appearance of the year in our Heisman Power Rankings this week, having finally done enough to make up for the 2.9 games he sat out with an MCL injury earlier in the season. Miller's improved mechanics and running ability make him an outside Heisman contender despite his time on the sidelines, and if he lights up Michigan in front of a national audience later this month, he'll be a genuine wild card.