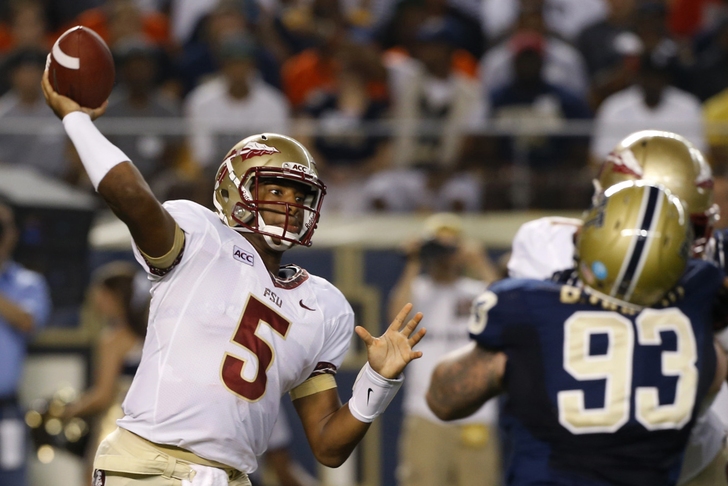 Oregon dropping their midweek game to Stanford changed the entire BCS (and Heisman) picture. The loss also added some real spice to the Heisman race, and Marcus Mariota will need a miracle to climb back into contention after failing to show up for Oregon's most important game of the season. There are still several challengers with a real chance of taking home the trophy - let's see who's in the best position in this week's Chat Sports Heisman Power Rankings.

6. Performance in big games – does each candidate have a “Heisman moment” on their resume?

Heisman Moment: Yes - accounting for 446 total yards of offense and four touchdowns in FSU's blowout of then-#3 Clemson (on the road, no less).

Once again, the Seminoles went up by so much early that Winston sat out the entire second half. FSU is absolutely steamrolling opponents right now, and they haven't been seriously challenged in any game so far this season. They've beaten three ranked opponents by a combined score of 155-28 (!!), and even in high-pressure situations (a road game against the #3 team in the country is about as high-pressure as it gets), Winston hasn't looked remotely fazed. Make no mistake - with Marcus Mariota out of the race, this is Jameis Winston's trophy to lose.

Heisman Moment: No - Manziel has had a strong season with some great games, but nothing stands out yet.

The biggest difference between this year's Manziel and last year's Manziel? By this time last season, he'd already led the Aggies to three wins over ranked teams, including the upset victory over #1 Alabama. Manziel may have had his heroic moments this year, but A&M still hasn't taken out a ranked opponent. The good news? After a week off, Manziel & co. face #21 LSU and #9 Mizzou back-to-back.

Plenty of "experts" thought Baylor would be exposed in their first game against a ranked team. Instead, the Bears "exposed" Oklahoma, with Petty throwing three touchdowns and running in two more. Petty's stats - 29 offensive TDs and just one INT - are even more impressive when you realize that before this year, he'd thrown just fourteen passes at the NCAA level. His lack of name recognition keeps him a little ways behind Winston and Manziel, but with three big-time games left on the schedule (Texas Tech, #12 Oklahoma State, and #24 Texas), Petty will get the airtime he needs to generate some buzz.

Nick Saban thinks McCarron is the most underrated player in college football, and while we can't agree (the most underrated player in college football probably doesn't play for the best and most visible team), he's certainly better than the "game manager" Alabama haters make him out to be. McCarron's biggest asset is still his cumulative resume - if he leads the Crimson Tide to a third BCS title game in four years, he'll get quite a few Heisman votes. It won't be enough for him to take home the trophy (it's hard to argue for a win when he isn't even the most talented player on his team), but McCarron has easily earned an invitation to the Heisman ceremony. Plus, do you really think the selection committee would throw away a chance to put Katherine Webb on national TV?

Heisman Moment: Yes - coming in on a sprained knee to rally his team past #5 Mizzou in double overtime.

Shaw has been quietly having a terrific season over at South Carolina. Despite JaDaveon Clowney's regression and a lack of seasoned playmakers, the Gamecocks are a strong 7-2 and still in contention for a shot at Alabama in the SEC Championship game. Shaw had a definitive Heisman moment in South Carolina's 2OT win over high-flying Mizzou, playing injured to help force overtime and eventually win. If the Gamecocks win out and gets a shot at Alabama for all the marbles, Shaw should be a legitimate Heisman contender.