Dabo Swinney's Take On The Ray Rice Situation Is Worth Hearing 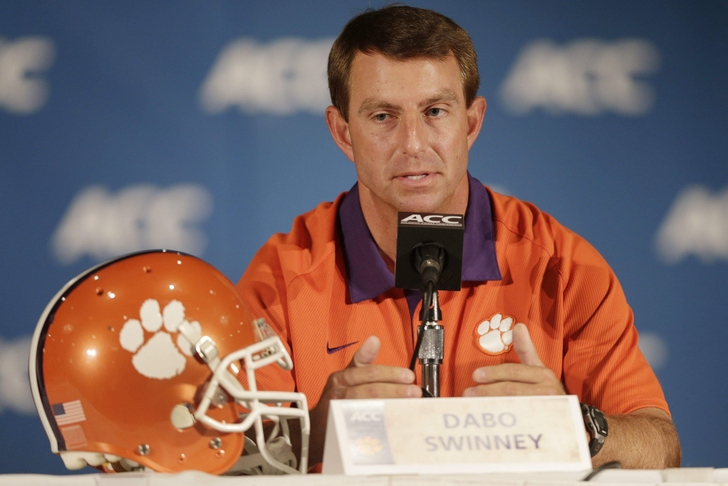 Not everyone is a fan of Clemson HC Dabo Swinney, but it's impossible to deny that he makes an excellent point here. Swinney was on CBSSports.com radio Wednesday and was asked about the Ray Rice situation - here's what he had to say:

“I talk to my players about this all the time,” Swinney said. “I don’t need a situation like this (Ray Rice situation) to discuss this with my team. I’ve been a head coach for over five years now, and every year – many times throughout the year – I’m always reminding our guys to do what’s right. There’s consequences for your actions, period. But one of the big no-nos and things you just got to have zero tolerance for is domestic violence. You just can’t put your hands on a female – not just (physical abuse), but sexual violence as well. Those are things that you can’t have any tolerance for. Unfortunately, sometimes you have to deal with certain situations. Fortunately, I haven’t had to deal with a lot of that stuff. But it’s out there.

“This isn’t a football problem. It’s sad that it takes a football player to get this into the limelight. This is a cultural problem. This is a society problem. Football is just a reflection of society. But for whatever reason, every time something bad happens in football, it becomes a national story. There’s women that are being beaten right now that nobody’s ever going to talk about, and there’s men that should be held accountable (but aren’t) because they don’t carry a football. To me, that’s the sad part of the whole story.”

Swinney's Tigers have this weekend off, and they'll take on #1 Florida State in Tallahassee next Saturday.