Breaking Down the Final Four 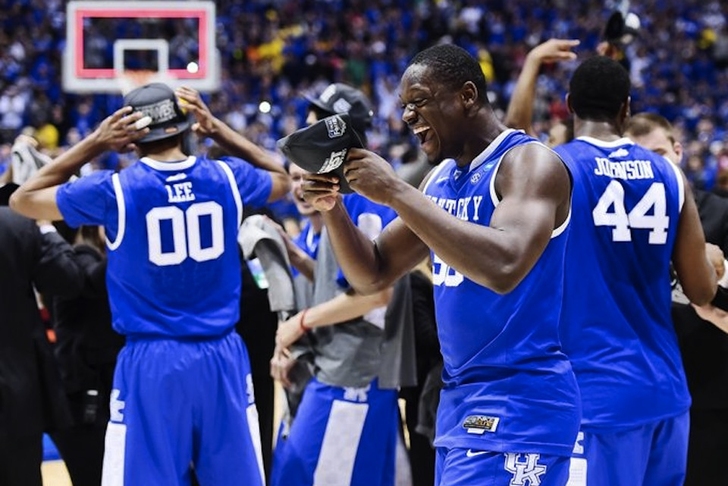 When the college basketball season began five months ago, it figured to be one of the most intriguing years in recent memory.

The incoming of Andrew Wiggins, Jabari Parker, and the rest of the "Best High School Class since LeBron" created such excitement around the country, but that wasn't all.

We had the return of Marcus Smart and everything that came with it.

Now, we've reached the peak of the college basketball world. The Final Four in Dallas. And the teams that made it aren't exactly who we expected.

Yeah, sure, you could say Kentucky was supposed to make it (being preseason #1 and all), but you never know how a team full of freshman will mesh and perform.

And Florida had high expectations, but probably not Final Four high.

Then there's Wisconsin, the team full of white kids that plays so slow and can't score ended up turing the traditional Bo Ryan model upside down.

It all seems unlikely and crazy, but that's what makes college basketball and the NCAA Tournament so great.

Florida came into the season with a team full of seniors, but lost a good majority of the production from last year's squad that had made three straight Elite 8's. Guards Kenny Boynton and Irving Walker gave way to Scottie Wilbekin and Michael Frazier and head coach Billy Donovan's team didn't miss a beat.

The Gators started their season with a 6-2 record, and both losses came on the road (to Wisconsin and UConn no less, two of the other three teams in the Final Four). After that last loss to the Huskies on December 2nd, Florida has reeled off 30 straight victories.

Making the Final Four is obviously a huge accomplishment, especially for a team that had been to the Elite 8 for three straight years without advancing, but becoming the first team to go through an entire SEC season undefeated is really special.

Florida's senior point guard is the player that takes this team to the next level. Sure, they can win games without him playing his best, but they need him to play well to beat the other teams in the Final Four.

He's averaging 13.7 ppg and 3.7 apg on the season - solid numbers on a very balanced team - but he takes the Gators to another level when he's aggressive and scoring the ball.

Example: He dropped 23 on Dayton in the Elite 8, and the game was never really in question. Yes, Florida's overall talent level is higher than Dayton's, but the Flyers never even got a sniff of a chance because of Wilbekin.

Head coach Kevin Ollie, with a lot of help from senior point guard Shabazz Napier, has brought this UConn problem back from the ashes of last year's probation. This program hasn't missed a beat from Jim Calhoun's retirement, and those two are to thank for that.

The Huskies are built on good defense and just enough offense, which usually comes in transition or through something Napier creates. Junior DeAndre Daniels has stepped up in the tournament and needs to continue to be a viable second-option for this team to beat Florida again and make the championship game.

This may have been earlier in the season, but it's one of the most memorable buzzer beaters of the year. With it being the last time Florida lost, and representing all things that are Shabazz, it holds a little extra meaning.

Napier leads UConn in points (18.1), rebounds (5.9), and assists (4.9) per game, and is the heartbeat of this Husky squad. Every time Connecticut plays, he essentially determines if they win or lose. Don't believe me? Roll the tape!

He's carried this team this far, and now he's trying to take them all the way.

Shabazz Napier is two wins shy of pulling a Kemba.

Wisconsin had a streaky season; they started 16-0 and climbed to #3 in the country, but then they lost five of their next six games. The Badgers responded by winning their next eight in a row, putting themselves back in the Final Four conversation, but then lost two of their last three games to close out the regular season. Now they've won four straight in the NCAA Tournament, and head coach Bo Ryan is finally in his first Final Four.

This Wisconsin team isn't like Ryan-coached teams of the past. They're just a mediocre defensive squad, but are a very good offensive team. The Badgers average 73.5 points a game and shoot 45.8% from the field as a team. They're probably the least talented team in Dallas, but their ability to play a diversity of tempos and attack a defense from both the inside and outside make them a tough matchup.

Wisconsin's basketball program is all about head coach Bo Ryan, and their celebration after beating Arizona to get them to the Final Four followed suit. It was nice to see such jubilation for the accomplishment of one of the great coaches in the game.

Kaminsky anchors Wisconsin's offense at seven-feet tall, but he has a soft touch and ability that extends out the the three-point line. He's not a great rebounder - only averaging 6.4 a game - but his play down low dictates how dangerous the Badgers can be.

The man affectionately dubbed "Frank the Tank" is going to have to play his best game of the year against Kentucky and their massive front line if Wisconsin wants to advance. The Wildcats are one of the biggest teams in the nation and go three to four deep with guys 6'9" and taller, even without and injured Willie Cauley-Stein, UK's tallest player. With Kaminsky being the Badgers only legitimate post threat, he's going to have to play a great game.

Kentucky came into this season with hype we have never seen. They had the "best freshman class since the Fab 5". They had John Calipari. They were selling 40-0 shirts. Preseason #1.

Then....they started to look like freshman. Then dysfunctional. Then overhyped. Then we thought they really just weren't that good.

Now everything has come full circle. Kentucky is back in the Final Four after a one-year absence from the tournament, and all the criticism this team has gotten the last two years has gone out the window.

Calling them the Cinderella of the tournament might be a stretch, but they're definitely this year's feel-good story.

This shot meant a lot more than just the Wildcats making the Final Four. It was the culmination of a year of frustration of both Harrison twins, Kentucky meeting their potential, and silencing everyone who doubted these freshmen and this team. Seeing that wry smile on his face after he hit it was special, too.

Randle came in as the third highest rated prospect behind Wiggins and Parker, and he has not disappointed at Kentucky this season. He leads in the nation in double-doubles, and averages 15.1 ppg and 10.7 ppg.

Even throughout Kentucky's rough stretches, Randle was consistently great. He's projected as a top-5 or top-10 pick in the upcoming NBA Draft, and he'll be a very good pro.

The one thing that differentiates him from Wiggins and Parker is that he's managed to lead his team deep into the tournament. Kentucky doesn't necessarily need him to have big games for them to be successful because of how many other options they have, but he's been their one most consistent players and when he's at his best, this team is at their best.