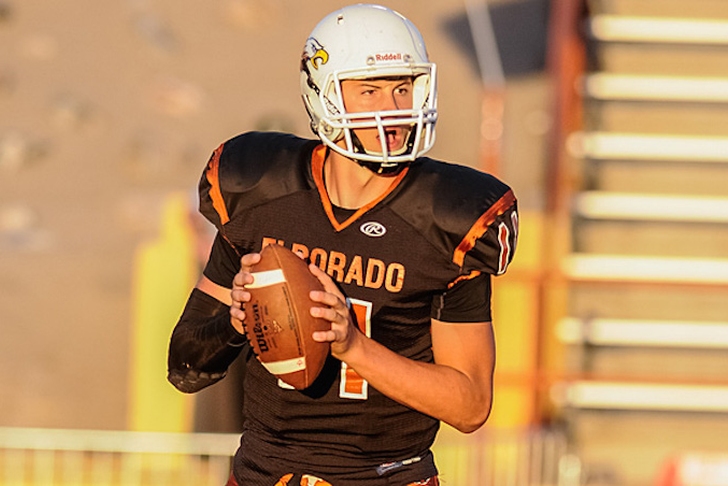 The Big Ten is on the rise with Ohio State winning the national championship and Jim Harbaugh hoping to bring Michigan back to prominence, all of which worked wonders for the perception of the conference on the recruiting trail. Here's a breakdown of how every team in the conference is doing this offseason: Ohio State's national championship didn't have a huge impact on flipping any recruits, but they still have a top-five class in the country. Their projected 24-member class is headlined by a lone five-star in OLB Justin Hilliard, who should see the field immediately.

Head coach James Franklin is already working his recruiting magic in Happy Valley, bringing in a top-10 class that should bring more talent into one of the more disappointing teams in the conference last season. The key will be bolstering their lackluster offensive line, and four-star prospects Paris Palmer and Sterling Jenkins should see immediate playing time. Mark Dantonio's class once again lacks the star power at the top, but he's shown a keen eye for underrated players and developing talent. Bruising running back Larry Scott is the star of this class, and he should see some time in the backfield after the departure of Jeremy Langford.

Wisconsin is bringing in another top-30 class headlined by running back Jordan Stevenson, who the Badgers are hoping can be the program's next great running back.

The Wolverines were behind the eight-ball in recruiting since they waited for a month after firing Brady Hoke to hire Jim Harbaugh, but that's already paying dividends for them on the recruiting trail. Michigan only has nine commits so far, but four-star QB Zach Gentry (who Harbaugh flipped from Texas) will be competing for playing time right away, as will speedster Brian Cole at wideout.

Nebraska's class is short on quantity with the departure of head coach Bo Pelini, but they're high on quality. Four-star CB Eric Lee will have an immediate impact for the Cornhuskers, and guard Jalin Barrett will give them some depth on the offensive line.

Northwestern has some of the most hard commits of anyone before signing day (20), though it appears most of their prospects are preparing to redshirt their freshman year.

Indiana has filled their class with a bunch of three-stars they hope can develop into top notch players, but four-star safety Tyler Green should see the field a lot early in his career and strike fear in opponents with his size (6'3") and hard-hitting style.

The Hawkeyes' class largely mirrors the style they play on the field. Their highest-rated recruits are all running backs and offensive linemen, headlined by four-star center James Daniels and four-star running back Karan Higdon.

Maryland has managed to keep a lot of their state's top players in-state in this class, and that should pay benefits for them down the road. Four-star DT Adam McLean should be a factor in the middle from day one and help improve what was a below-average defense last year.

Rutgers landed a huge recruit with four-star DE Marques Ford, but outside of him, every else seems to need a lot of development. Three-star QB Michael Dare will be battling for the starting quarterback job, and his production could be the key to the Scarlet Knights' season.

Head coach Jerry Kill has developed a reputation of doing more with less, and he's going to have to do the same with this recruiting class that doesn't have a single four- or five-star recruit.

Purdue has seen the effects of several losing seasons on the recruiting trail in 2015, but wideout Anthony Mahoungou should see some time as a big-play threat right away.

Four-star OT Gabe Megginson's decision to stay in-state was the highlight off the offseason for the Illini, but unfortunately, they weren't able to make a lot of noise anywhere else.

The 6 Best 2015 Football Recruits In The Big Ten