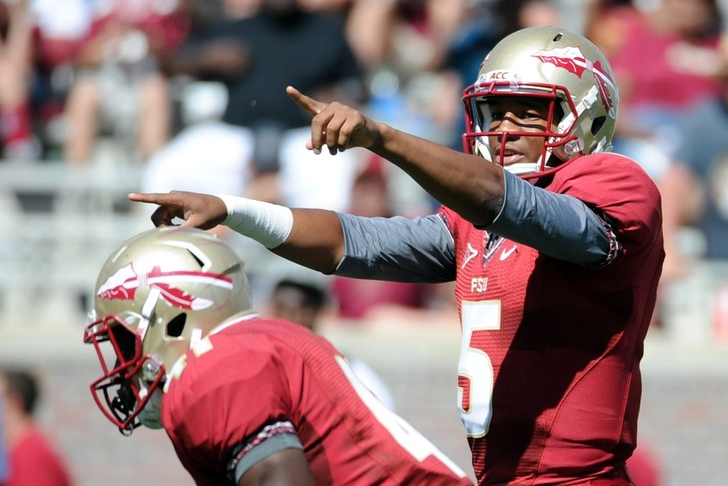 Another weekend of upsets thinned the field of legit BCS Title contenders even further. While Oregon remained #2 in the AP Poll, Florida State's blowout of Clemson bumped them ahead of the Ducks in the BCS rankings, and Jameis Winston's team looks poised to leapfrog the Ducks into the national title game. With the #2 and #3 teams separated by just .0028%, who can we expect to come out on top?

It's true - Florida State has the edge in the BCS rankings, but we think Oregon's loaded remaining schedule gives the Ducks an edge. Oregon still has games on their schedule against #12 UCLA, #6 Stanford, and a Pac-12 Championship matchup that will probably give them another shot at UCLA.

There's no way the Ducks won't move ahead of Florida State if they win out, and we'd expect them to handle Stanford and UCLA with relative ease given how dominant they looked against Washington two weekends ago.

Alabama continues to steamroll all opposition, and they'll have two tough-but-manageable games against #13 LSU and #11 Auburn to navigate on their way to an SEC Championship game against #5 Mizzou.

Florida State is ahead of Oregon in the BCS rankings, but we don't expect things to stay that way for long. As impressive as FSU's victory against Clemson was, the Seminoles only have one ranked team left on their schedule - #7 Miami on November 2.

Everyone thought Florida State's season finale against Florida would have serious BCS ramifications, but a victory over the reeling Gators won't do much to impress the computers - if they lose to Georgia and South Carolina, Florida will go into the matchup with five losses. Another matchup with Miami in the ACC Championship game won't hurt, but it still won't be enough to pull the Seminoles into a national title matchup.

As good as the Buckeyes have looked at times this season, they're falling victim to a Big 10 conference that's as weak as it's been in decades. They're likely to finish the season without having played a top-15 team, and that just isn't going to be good enough unless multiple teams ahead of them in the pecking order lose and the Buckeyes win out.

Baylor has officially reached "lovable underdog/wild card" status thanks to a ridiculous offense that would give Chip Kelly whiplash. The Bears have scored 70 points FOUR TIMES in their six games this year (and racked up 69 once too). Their schedule has been pretty cushy so far, but they're about to play three top-20 teams in a row, and finish off the season against a Texas squad that could very well be ranked by then as well. If they can keep up their absurd pace (and that's a big if), they'll be poised to sneak in if a few of the leaders slip.

Mizzou has come together into a surprisingly solid team, and they've assembled one of the most well-balanced squads in college football. We'll know a lot more about their national title credentials after a few more weeks of SEC competition, but unlike FSU, Ohio State and Baylor, they have the luxury of controlling their own destiny. If Mizzou wins out, they'll have a tantalizing matchup with Alabama in the SEC Championship game - and if they can somehow take out the Crimson Tide, they'll find themselves in the national title game no matter what anyone else does. Still, we're having a hard time picturing anyone beating Alabama, so they still find themselves at the bottom of our list of legitimate contenders.

Looking for all the latest college football news and rumors? Sign up for a free account today to get the most complete coverage of your favorite teams available anywhere online.