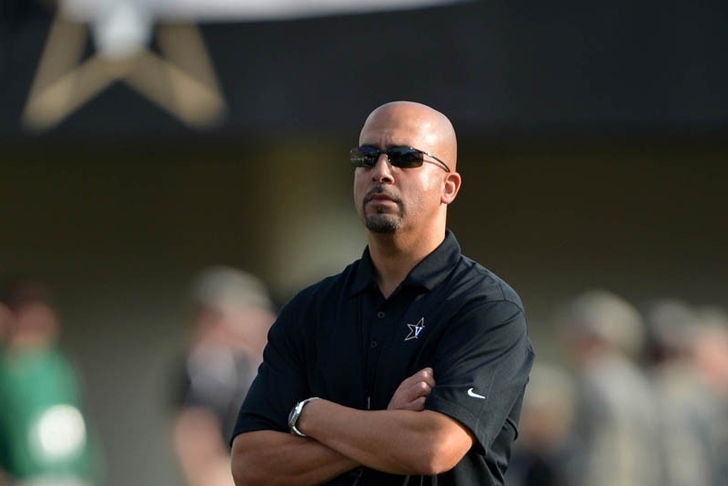 Tony Gonzalez of the Tennessean reports that former Vanderbilt HC James Franklin (who departed for Penn State in January) was in contact with the young woman who reported being raped by four Vanderbilt players after the charges had been filed.

According to records cited by the Tennessean, Franklin and former Vanderbilt Director of Performance Enhancement Dwight Galt (now also at Penn State) contacted the victim during a medical examination four days after the alleged rape to explain "that they cared about her because she assisted them with recruiting."

The victim had reportedly been part of a team of fifteen girls Franklin had assembled to assist with recruiting. According to court documents, Franklin and the victim first met well before the alleged rape.

"Coach Franklin called her in for a private meeting and told her he wanted her to get fifteen pretty girls together and form a team to assist with the recruiting even though he knew it was against the rules. He added that all the other colleges did it."

Vanderbilt and Penn State both declined to comment to the Tennessean. The paper was able to reach Franklin on his cell phone, but his only statement was that he was "not interested in talking."

The allegations in the Tennessean were part of a larger story on the defense team representing the players. The defense has requested that the case be dismissed because of a large amount of evidence that prosecutors destroyed or failed to preserve. You can read the original story in its entirety here.